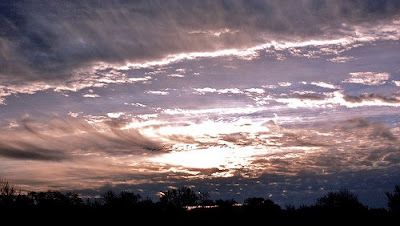 Sunrise Over Plain Hill
Originally uploaded by cole_photography
A lot of bloggers participate in a meme called "Sky Watch Friday" and even though I love looking at all of the pictures they post, I just haven't had the time to add a regular meme to my somewhat hectic schedule. Still, I have been fascinated by the sky lately and as Amanda says, have had my head in the clouds when it comes to a lot of my picture-taking recently. As a matter of fact, I took some yesterday that I will probably be sharing with you soon but for today, I wanted to post this picture that was taken by my friend and co-worker at American Ambulance, Dennis.

Some of you might remember Dennis from my post An Award for a Friend - he's the kick-ass paramedic who makes some equally kick-ass hot wings! Turns out he also takes some kick-ass pictures but that's probably because he owns a kick-ass camera - a Nikon D40 which he recently upgraded to from his Nikon D3. I swear, he's got all the cool toys that I'd love to have if I were a) younger, b) made the money he does, and c) didn't have the bills that I do!

With Dennis' gracious permission I will be using some more of his pictures for next week's Manic Monday Meme - the theme of which is night. Hopefully you can stop by then to check those out!
Posted by Linda at 6/20/2008