Due to my work schedule, assorted things to do around the house, and the 294 unread posts that were sitting in my Google Reader when I finally got around to opening it yesterday (ouch!), I have yet to get the chance to do a post about last Friday's Mindless Self Indulgence concert at Terminal 5 in New York City. Truth be told, I am also still somewhat worn out from last Friday's concert but there is no rest for the wicked - or for the parents of teenage daughters it seems - as tonight I will be attending yet another Mindless Self Indulgence concert - this time in Hartford at the Webster Hall Theater along with Jason, Amy, and Cate as well as Amanda and Darci. 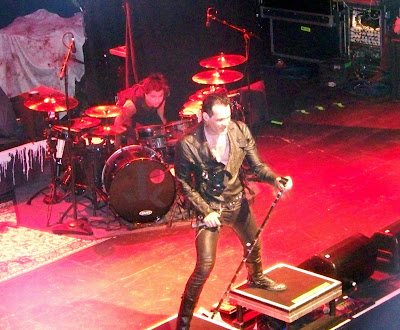 No doubt it's going to be déjà vu all over again as I'm sure that the Long Beach, California band Julien-K will kick off the night's musical festivities as they did in New York. The band touts themselves as "Alternative - Electronica - Club" as their musical genres on their MySpace page but, honestly, I'm not so sure about the Electronica part. Now had they described themselves as "Alternative - Loud - Leather Clad" I think it would be more appropriate! I had to wear ear plugs with these guys and have the sneaky feeling I shall need them again tonight! 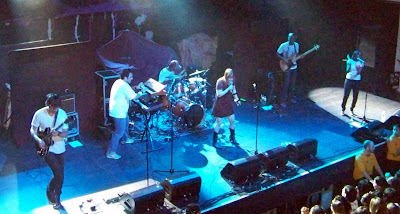 The next band to take the stage may very well be a local band like it was in New York City. Hopefully they can't possibly sound any worse than the New York local band who played at Terminal 5 - What What Where . That group was absolutely, positively horrible with the lead singer sounding more like a bag of wailing cats than any sort of vocal talent. To give credit where credit is due, their music is marginally better on their MySpace page and they did put their all into the concert but it was a very painful all! Honestly, they couldn't have gotten off the stage fast enough. Oh, and before I get lambasted by hostile fans who tell me I don't know what the blanketdy-blank-blank I'm talking about, I wasn't the only one who shared that opinion - I was with four other people who thought so and have read numerous reviews of the concert that said the same thing. So there! 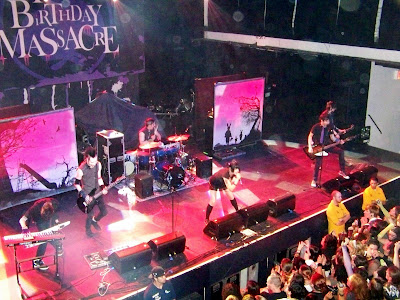 Now, if the show goes according to Friday night's schedule, the next band to hit the stage will be The Birthday Massacre who were quite good and a definite crowd favorite. I suspect Amanda likes them because of their keytarist! The band originated in London, Ontario, Canada under the name Imagica but changed their name in July of 2002 shortly after relocating to Toronto and changing a band member or two. Their lead singer, Chibi, is very animated and the crowd just loves her. The only problem with this band is that the pit goes absolutely crazy with fans slamming into each other and forming what are known as "circle pits". These areas of the crowd make a mosh pit at a Metallica concert look a tea party with the Queen and are usually started by members of the crowd running wildly in a circle slamming into each other in response to the speed of the music and the beat. 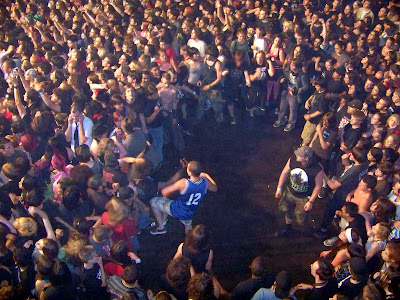 Trust me, these things are pretty scary looking and I was very glad that Amanda and Darci were nowhere near one. People could - and do - get hurt even though audience members will typically try to pull dancers that have fallen over out of the way of serious injury as quickly as possible. 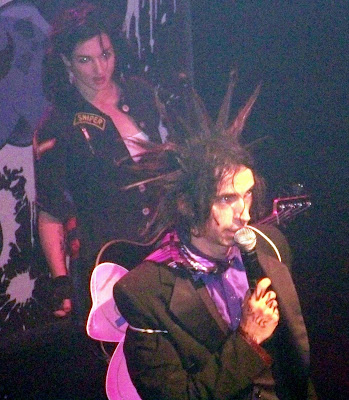 After all of that, Mindless Self Indulgence will finally take to the stage and the crowd will really go wild. There probably won't be any circle pits during their performance as their type of music doesn't inspire them but there will be plenty of crowd-surfing, singing along, and fist-pumping. Jimmy Urine, lead singer of MSI, is nothing if not a showman and again, I am somewhat reminded of Fee Waybill of The Tubes concerts that I used to go to when I was much, much younger!

Kitty will play her heart out on the drums, Steve will wander around the stage with his guitar making faces and acting strange, LynZ will do that incredible back-bend of hers, and Jimmy - well, Jimmy will wear you out just watching him! 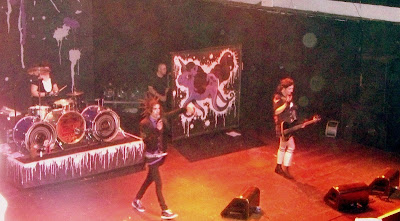 Is it any wonder that I haven't recovered from Friday's concert? I'm going to be 50 in just a little over two months - this is no sort of activity for a card-carrying member of the AARP and respectable grandmother! Yet there I will be - once again - not crowd-surfing, not slamming into other bodies in a circle pit, not pumping my fist in the air but probably singing along because of course I know all the words - you would, too, if you lived with Amanda! 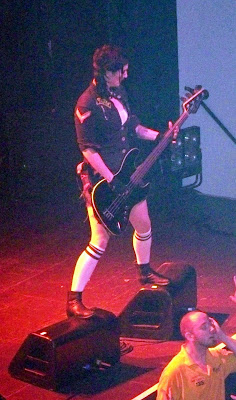 Even though the concert will be loud and no doubt the concert hall will be hot, probably the worst part will be Thursday morning when myself, Amy, and Jason all have to crawl into work while the three teenagers who are the ones who really, really, really need to see MSI again less than a week since they saw them last will no doubt sleep in! Doesn't sound quite fair, does it?

Let's hope that these kids realize and appreciate the sacrifices that we adults are making for them and their favorite band but somehow I think that's going to get lost in the excitement of the whole evening. I'm sure, though, that we can manage to remind them later ... Several times ... Repeatedly ... Ad nauseum!