Fireworks From the Point

With weather much better last night then there was last Saturday for the fireworks in Norwich, Amy and I decided that it would be nice to take the girls down to see the fireworks for the annual Sailfest in New London. Normally I avoid these particular festivities like the plaque as I am a self-professed crowd-hater but I'd always heard how good the fireworks in New London were and I wanted to try my hand at some more fireworks pictures in the hopes that they would come out better than those of last week. Plus it was a beautiful night and Amy grew up down that way so knew where she was going and all I had to do was kick back and enjoy! Now that's my kind of evening!

After driving past the area of Fort Griswold in Groton and deciding that it was best to be avoided due to the massive amount of people heading in that direction, Amy decided that the best place to go would be Eastern Point Beach which is where the Thames River meets the Long Island Sound. I had never been there before but I plan on definitely going again - especially some evening during a full moon or maybe even when there's a storm if I'm really feeling adventurous! 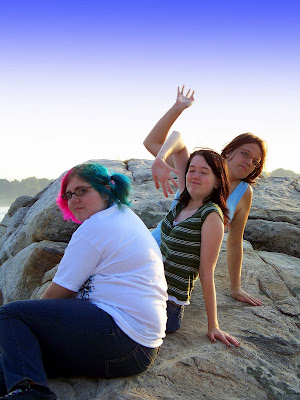 Amanda, Cate, and Jamie wasted no time in finding the perfect spot on a rock to look at the Sound before watching the fireworks so while they sat there like seals or mermaids - take your pick! - enjoying the beautiful evening, I decided to walk around a bit and take a few pictures. Wait ... let me amend that ... I decided to walk around and take a lot of pictures! You can see most of them in the slideshow at the end of this post but until you get there, here are a couple of my favorites ... 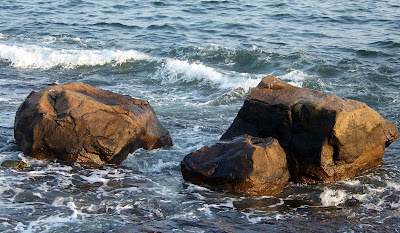 Waves on the rocks 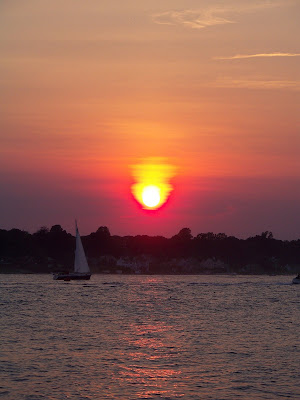 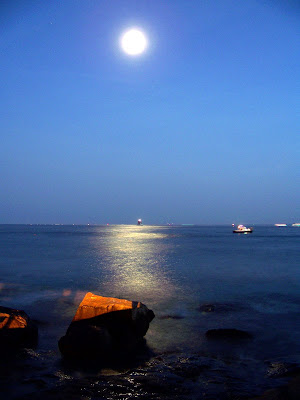 Moonlight reflecting off of the Long Island Sound
That's Ledge Lighthouse directly under the moon though you can't make it out in this picture.
The fireworks were scheduled to go off at 9:30 -which they did right on time. Amy had brought a radio with her (and apparently was the only one in the crowd who had!) so we were able to watch the fireworks with the accompanying music. We were a good distance from the barges they were setting the fireworks off from so we didn't get too many of the booms and pops but the music went perfectly and the show was excellent. My only complaint was the fact that the show was sponsored by the Mashantucket Pequot Tribal Nation (who own Foxwoods Casino) and it was ridiculously pathetic how many times that fact had to be mentioned on the radio. Talk about blowing your own horn ... yeesh! 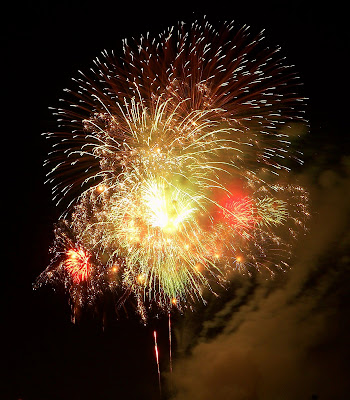 This particular shot is part of the fireworks finale. I think that my pictures came out a bit better this time around even though the smoke was still hanging in the air due to not enough of a breeze to move it along. If I knew how to do all that fancy-dancy stuff like filter it out they would be better but alas, I'm just no good at picture editing - at least not yet! Give me some time and maybe I'll figure it out one of these days!

In the meantime, here are some more pictures of our evening at the Point. We all had a really good time and the most surprising part of all was that we didn't even have to sit in a major batch of traffic to get home which made it an even better evening!