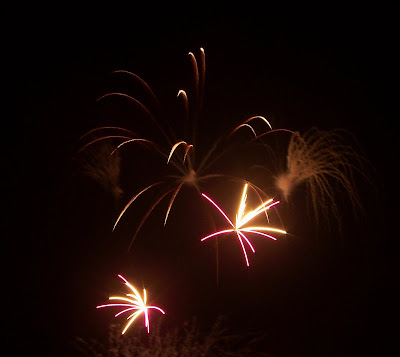 Despite the threat of rain all day, last night's Fourth of July Fireworks on the Fifth extravaganza here in Norwich began right as scheduled at 9:30 over the Norwich Harbor while thousands lined the streets of downtown and the west side of town. Myself, Amanda, Darci, Jamie, and her new friend Megan were all part of those thousands as we took up our usual spot in the lower parking lot of American Ambulance where I work. 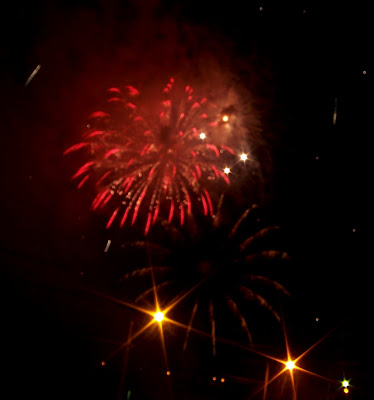 Not only is it one of the best places to watch the fireworks from but it also gives me the chance to visit with some of my fellow coworkers outside of our usual work setting. While the girls walked down to the Marina where all sorts of food and novelty booths were set up I visited with Andrew and Bethany and their two kids AJ and Lea. They even offered me a tasty hamburger from their grill as well as some of Bethany's fantastic potato salad! Woo-hoo! I actually did get to have a burger and some potato salad for the holiday after all! Thanks, guys! 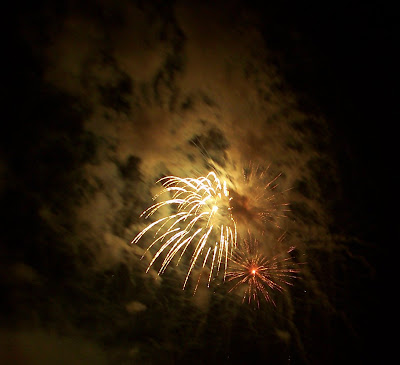 The only downside to the evening was that the air was pretty thick and the clouds were pretty low so a lot of the fireworks went up into a thick cloud of smoke which hung larger over the harbor with every pyrotechnic that lit up the sky. I was kind of bummed about that as I was using this as my first opportunity to try taking some fireworks photos and I'd even been smart enough to bring along a mini-tripod to steady the camera! Of course, I wasn't smart enough to bring extra batteries and the ones I had didn't have the charge that I thought they did so I didn't get as many pictures as I would have liked. D'oh! 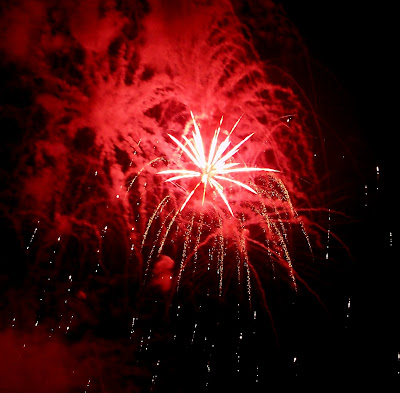 Ah well, the Mohegan Sun casino will start their Wild Wednesdays soon and part of that is the fireworks shot off from the roof of one of their parking garages. Perhaps I can try again then and get some better results as hopefully the weather won't stay like this all summer - hopefully! And I'll be smart enough to bring extra batteries, too!

Hope everyone had a marvelous and safe holiday weekend!
Posted by Linda at 7/06/2008