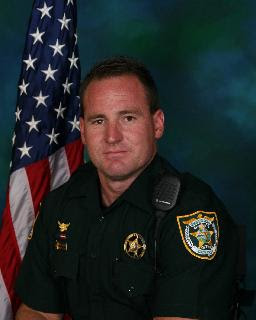 The State of Florida lost yet another Law Enforcement Officer in a line of duty death incident on Tuesday, July 22nd when an Okaloosa County sheriff’s deputy was shot and killed in a shootout with a man who had been ordered by a court to undergo a mental evaluation and who had twice left a hospital before barricading himself in a home.

Deputy Sheriff Anthony Forgione, a member of the Okaloosa County Sheriff's Department Special Response Team, was shot and killed Tuesday morning as he tried to apprehend a man who had escaped from the Fort Walton Beach Medical Center following an incident where the suspect had kicked out the window of a patrol car.. Deputies had received word that the suspect had returned to and barricaded himself inside his childhood home. Negotiators attempted to talk him out of the home but when that failed family members provided deputies with a key to the home and the SRT team entered the house. At that time the situation turned deadly when the suspect opened fire killing Deputy Forgione. Other deputies inside the home returned fire and killed the suspect.

Deputy Forgione, age 33, would have celebrated his three-year anniversary with the Sheriff's Office on Thursday, July 24th; previously he had worked for the Fort Walton Beach Police Department.

In a statement released by the Florida State Attorney General's Office, Attorney General Bill McCollum said: “I wish to offer my deepest sympathy to the family, friends and colleagues of Okaloosa County Sheriff’s Deputy Forgione, who was killed this morning as he protected his community during a standoff with an armed suspect. Deputy Forgione’s death follows Friday’s shooting death of Fort Myers Police Officer Andrew Widman. My heart goes out to Florida’s law enforcement community as its members grieve the loss of another one of their own.”

Deputy Forgione leaves behind his wife and two daughters, ages 5 and 10; he is the department's first officer to be killed during the line of duty, a very sad distinction.
Posted by Linda at 7/23/2008