Fifteen years ago today I was spending some time at the William W. Backus Hospital here in Norwich giving birth to my youngest child - 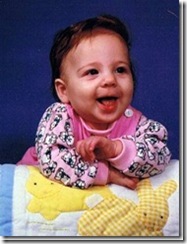 the only one not born on the West Coast (Michael was born in Riverside, California and Amanda was born in Long Beach). Jamie was also my easiest birth as I had gone in for an amniocentesis to see if her lungs were developed enough for them to induce labor in a few days (I had gestational diabetes with both she and Amanda) but instead they ended up doing a C-section just hours later as there wasn't enough amniotic fluid for them to do the test. Ut-oh!
Shortly after my friend Carol arrived (Jamie's father was out to sea somewhere in the Pacific at the time), they rolled me into the Operating Room and before I knew it they were handing me a little blue sausage of a baby - at least that's what she looked like to me! Even though I had been injecting insulin for several months, Jamie wasn't a classic oversized diabetic baby as she weighed

in at only 6 pounds, 6 ounces and 19 inches long. Compared to my other two she seemed downright miniature and is still the smallest of my three.
She's also probably the most adaptable of the three and has always been a bit of an imp (well, okay, not just a bit!). She likes classic rock and roll with AC/DC being her number one band, loves horror movies (especially the Friday the 13th series), likes to draw almost as much as Amanda does, and talks - a lot - which Mags could certainly attest to after our weekend at her place in Boston last week!
To celebrate her birthday today we're going to have lunch with my mother and then go to the movies to see "The Dark Knight" with a friend she met on her plane ride up from Florida earlier in the month (who just happens to live the next town over). I also need to get her an ice cream cake, which is her favorite and something she looks forward to every year. 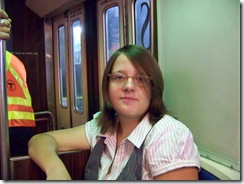 Happy birthday, kiddo, and may the next year be a wonderful one for you filled with all of the things that make 15-year olds happy - acne not being one of them!