Way back in April (which seems like a lifetime ago now!), I participated in Mo's Manic Monday Meme for the week of April 14th when the word was bud. I posted pictures of various buds around my front yard and one of the pictures that I took was this one - 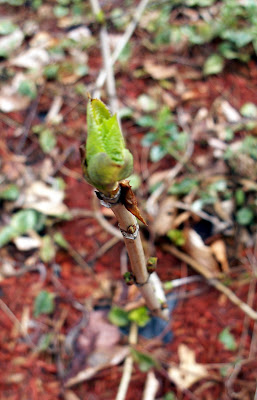 At the time of the posting, I could not for the life of remember what type of plant that was and had no clue what sort of flower that bud might eventually produce. Throughout the spring it grew and grew and then just last week it blossomed ... 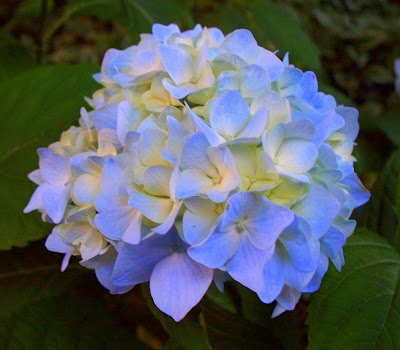 Duh ... it was one of the hydrangeas I had planted a couple of springs ago! I swear, I have definitely come down with early onset dementia or something! Once my memory was jogged by the appearance of this lovely flower it was then that I remembered that I had initially planted three of them but alas, it seems that this is the only one to have survived. 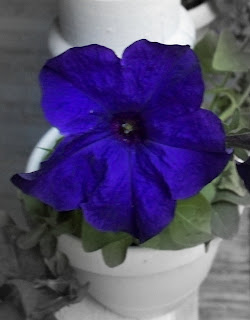 In addition to that lovely blue hydrangea, I have a front porch that is literally covered with other beautiful flowers like the petunia pictured here. I was following around with one of my photo programs a little bit and rather liked the color against the black & white. I'm nowhere near as good of a flower photographer as Claire is but I enjoy taking pictures and then fooling around with them a little bit from time to time. If this keeps up I'm going to have to think about sending in a picture or two for Creative Photography, a contest run by Roger of Idaho Daily Photo that Princess Patti at Late Bloomer Boomer has mentioned a time or two. Not that I think any of my pictures are anywhere near good enough to win but it might be fun to join in. 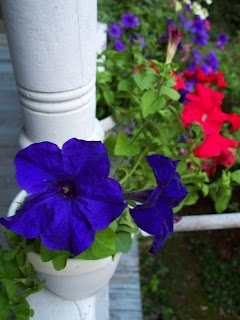 This picture to the left is the original picture that I had taken before I started experimenting with it. Pretty petunias, aren't they? I thought they were actually rather patriotic for the Fourth of July and they certainly brighten up the front of my house. Plus it smells really nice out there!

Oh, and don't forget that it's not just flowers that I have on my front porch - I also have my own lone tomato plant in a pot that I wanted to try growing this year. It has grown by leaps and bounds but I was beginning to wonder if it was ever going to produce any tomatoes when today I found this - 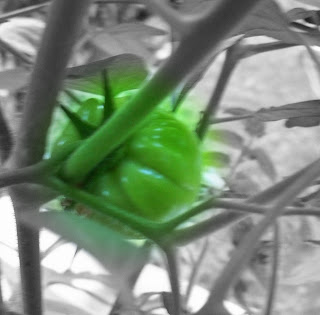 Woohoo! It's my very first tomato and I couldn't be prouder. Silly, I know, but it really made me happy to see it nestled there amongst the tomato plant branches. I just hope it's not going to be an only child!
Posted by Linda at 7/03/2008

Email ThisBlogThis!Share to TwitterShare to FacebookShare to Pinterest
Labels: flowers