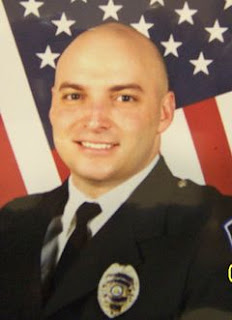 In what was described as "a sign of the times" by retiring Officer Bob Hilton of the Twinsburg Police Department, two police departments are mourning the loss of one of their own.

Police Officer Joshua T. Miktarian, a full-time member of the Twinsburg Police Department and part-time officer for the Uniontown Police Department, was shot and killed during a traffic stop in the early morning hours on Sunday, July 13th.

Officer Miktarian - a K-9 officer who had worked Twinsburg's midnight shift since 1997 - pulled over a vehicle at approximately 1:54 a.m. for an investigation of loud music and possible driving under the influence. At 1:56 a.m. the officer requested additional assistance and it was at that time that neighbors told officials that they heard shots fired and 911 was called. A status check by dispatchers over the police radio went unanswered while back-up officers were responding to the scene. Officer Miktarian was taken to MetroHealth Medical Center via Life Flight, where he was pronounced dead from multiple gunshot wounds to the head at 2:48 a.m. Sunday morning. Officer Miktarian's K-9 partner, Bagio, was in the cruiser at the time of the shooting and was not injured.

"Josh always was making people laugh," said his colleague, Officer Robert Hilton. "He kept everyone smiling. He kept the guys happy and going, which is really something when you work straight midnights." He was described as "a great person, hard worker, and loving husband and father" by retiring Officer Bob Hilton.

An 11-year veteran of the Twinsburg Police Department, Officer Miktarian, age 33, had recently returned to part-time work in Uniontown where he began his law enforcement career in April of 1996 so that he could teach some of the younger officers a bit of what he had learned. In addition to his law enforcement duties, he also owned a pizza franchise in Sagamore Hills and played guitar in his band, Barium. Officer Miktarian leaves behind his wife, Holly, who is an Oakwood police officer, and his 3-month-old daughter, Thea.
Posted by Linda at 7/14/2008