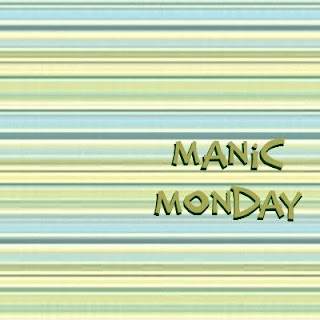 Our host of Manic Monday, Morgen at It's a Blog Eat Blog World, declared this week's Manic Monday word to be "stripe". My guess is that it was in keeping with the 4th of July holiday and the stars and stripes that decorate our beloved American flag. As a matter of fact, I was kicking around the idea of doing a post about the flag and its origins but then a new idea for a post struck me ... literally ... right in the middle of my lower back. 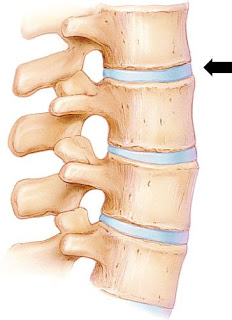 See those blue stripes over there in that picture? The little black arrow is pointing to one of them. Those are called spinal discs (or intervertebral discs if you want to be technical) and those are what keep your vertebrae from rubbing together and causing all kinds of pain. Someone once described a spinal disc to me as a jelly donut and said that they work great when the jelly stays inside the donut but when a disc becomes herniated then the jelly (or nucleus pulposus) slips out and back pain incurs at the point of herniation when the protruding discs presses on a spinal nerve. In other words, if the jelly donut gets squeezed too tightly then the jelly all seeps out the sides making a horrible mess!

I have two of those herniated discs in the L4-L5 (lumbar) region of my back - i.e., my lower back. In addition to that I have a genetic narrowing of the spine (stenosis) and, just to make things even more interesting, some arthritis has decided to get into the act, too. Oh lucky me! In August of 2005 (the 17th to be exact), I underwent surgery after missing two months of work because I could barely move from Paint A to Point B as the herniation in my back had gotten to the point where it was causing major sciatic pain from the bulging disc that was sitting on my sciatic nerve. 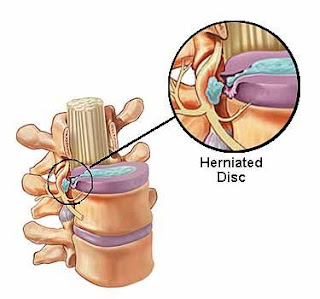 During that very long two months I wanted to amputate my own leg at times as the pain was so bad I could hardly stand it but as my doctor explained it to me, even if I cut my leg off the pain would still be there as even though the pain was being felt in my leg, it wasn't in my leg but was from the affected nerve in my back which ran down my leg. Wherever it was, it was the worst pain I have ever had in my life and I wouldn't have wished it on anyone - including either of my ex-husbands!

After three trips to the emergency room in the back of one of the ambulances I normally dispatch to other people, my doctor was finally able to get the pain down to a dull roar with a combination of three different medications. Those kept me sane until surgery at which time my doctor performed what is called a "laminectomy", a procedure that surgically removes a portion of the lamina (part of the spinal canal's bony roof) to take pressure off of the nerve root. It didn't fix my herniated discs but it helped me to feel a lot better - most of the time.

I still battle back pain off and on and have learned that I definitely have physical limitations. Standing for long periods of time is not considered a very good idea, lifting heavy objects is out of the question, and if you want to know if it's going to rain or if there's a major snowstorm moving into the area I can be just as accurate as any of the weather forecasters on our local news channels. Sometimes I don't have to do anything at all out of the ordinary to get that electrical jolt down my back which indicates that I am going to be hobbling around like Quasimodo for at least several days while a stripe of pain runs across my lower back and down one or both of my legs.

And that's exactly what happened early Sunday afternoon and became the inspiration for this post - one that I could have happily done without! I had gone to the grocery store to get some much-needed groceries as I was doing Mother Hubbard proud but the girls were not handling the lack of food in the house very well. When I got home I was putting the groceries away and knelt down in front of the refrigerator to stack up yogurt containers and as I went to stand up I felt that old familiar pain across my back and knew right then that I was in trouble. Again.

After numerous muttered curses, I popped a couple of Aleve and hobbled upstairs to lie down until it was time to take Darci to the train station for her return to New Jersey. Following that I limped into work and did my best not to aggravate things overly much there though it was painful every time I had to reach to switch radio frequencies or answer the phone. As much as I would have loved to stay home and babied my back until I felt human again, I work for a company that isn't overly generous with sick time (we get 3 days a year) and I simply can't afford to take any unpaid time off. The worst thing is I have to work a 16-hour shift today and I'm not any too sure how well that's going to go as no doubt the stripe of pain across my lower back caused by the herniation of that other little stripe shown above is going to get wider as the day goes on. Needless to say, I'm not looking forward to it.

So while I'm sitting at work and cringing every time I have to move, I'm sure there are lots of posts out there with less painful versions of "stripe" so don't forget to check out Mo's Manic Monday Meme.

Email ThisBlogThis!Share to TwitterShare to FacebookShare to Pinterest
Labels: back pain, Manic Monday