Two weeks ago Amy, my friend and co-worker at American Ambulance, and I rented a lovely little red Jeep Liberty from Enterprise, piled three teenage girls in the back, and made the 2-1/2 hour trek to New York City from Norwich. For weeks Amanda, Cate, and Darci had been looking forward to our trip to the city and the Mindless

Self Indulgence concert at Terminal 5. To say that it was all they seemed to talk about would be a drastic understatement! They were excited while Amy and I were probably borderline crazy but no matter what we

were all looking forward to a good time.

I hadn't driven down to the city since my friend MizCyn had come out to visit in the Spring of 2002 but I was up to the challenge and actually looking forward to it. Amy had brought along her handy-dandy GPS and stuck it on the front windshield so we had no

fear of taking a wrong turn or missing the closest Dunkin Donuts should the need arise for coffee! Bigify the picture to see what I mean!

The drive down was uneventful and we made good time arriving in Manhattan just a little after noon. I had planned out our garage destination using a convenient online system with Icon Parking and - except for the usual Manhattan traffic clogging up the roadways - we had

no problems finding our garage with the hotel directly across from it.

After checking in at the hotel and our fantastic experience with Willie the desk clerk, we hiked a couple of blocks down to Times Square where lunch was in order. I had kind of wanted to go to the Hard Rock Cafe but everyone else wanted Planet Hollywood so that's where we went. I've been to the Hard Rock before and there's one here at Foxwoods Casino so no big deal; I was up for something new!

Our waiter, Angel, was almost as friendly as Willie and made our lunch experience very pleasant indeed. So far we were batting 1,000 with the friendliness of New Yorkers!

Following lunch we made our way back to the hotel where the girls wanted to get ready for the concert early so that they could go sit outside of the venue in line with all of the other MSI fans in order to get a good spot in the pit. Amy and I decided that we would get them settled there and then head up to Columbus Circle in search of a David Off store and cigars for Dennis, the

paramedic who so graciously allows me to use some of his pictures from time to time. The venue and Columbus Circle were quite close and we kept in touch with the girls via cell phone so everyone was happy.

Following the acquisition of a couple of fine cigars, Amy and I caught the subway back to the venue and made our way up to the VIP area with Cate who opted out of being in the middle of the pit with a lot of other crazed people. I'd have to say that was a smart move on her part as she's a tiny thing and surely would have been crushed in the sea of humanity that was writhing below us! I kept in touch with Amanda via cell phone text messages to make sure that she and Darci were doing oka

y in between attending to my designated videographer duties.

The concert was everything the girls hoped it would be and after getting the chance to meet up with the band members afterwards we caught a taxi back to our hotel and then walked to an all-night pizza joint for a very late supper before calling it a night.

mpse of the Statute of Liberty and Ellis Island. By that time Amy had gotten really good at hailing taxis and caught a nice mini-van for our trip. Sadly it wasn't Ben Bailey and The Cash Cab but our driver was very nice nonetheless!

Our drive down the West Side Highway took us directly past Ground Zero and the site of the former World Trade Towers. As we crossed under the white foot bridge that was seen in so many pictures following 9/11 and I looked towards the construction site where those two magnificent towers once stood, it's hard to describe how I felt. A tingling sensation started in my feet and traveled all the way to the top of my head leaving me feeling cold and numb in its wake. I had no desire whatsoever to snap a picture of the cranes that worked diligently at the site of the memorial that will eventually take the place of the two buildings that once towered over lower Manhattan. I was filled with an overwhelming sense of dismay that human beings could have done such a thing to each other as I wiped away a tear and looked the other way. Amy later told me that what she felt was angry but I didn't feel that - just an overwhelming sadness. I'm in no hurry to go back there again.

Arriving at Battery Park we walked around a bit while lines and lines of tourists circled all around Castle Clinton and the pathways lining the park awaiting their turn to board one of the ferries heading out to Liberty and Ellis Islands. The day had become hot and humid and a haze hung over the harbor making it hard to see either island from the shore but Cate was glad to have gotten a view of Lady Liberty standing with her torch held high. While we were there I took the opportunity to show Amanda a name inscribed on one of the granite walls of the World War II Memorial that faces out to sea and honors those soldiers, sailors, and airmen who died in the Atlantic Ocean. The first time I saw the name William 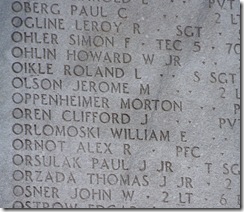 E. Orlomoski inscribed on this stone I was quite surprised as there is no way that there's an Orlomoski somewhere who isn't related. It's not exactly what one would call a common name! Pvt Orlomoski was a member of the Air Corps and hailed from Illinois where I know my father's father came from but beyond that, I'm still not sure who this veteran was who died defending our nation during World War II. Someday I hope to find out. 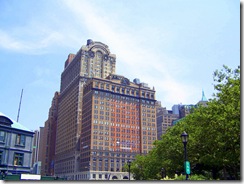 ict as it was getting close to curtain time for Mary Poppins. Amy had really lucked out on scoring tickets for the show and even though we were at the very top of the balcony in the very back row we had a good view of the stage and the girls absolutely loved the play. It was Cate's very first Broadway show and she was absolutely enthralled; Amanda had seen Beauty and the Beast on Broadway years earlier when her father and I were still married and we took the girls down to see it so this was her second Broadway show but she enjoyed jit every bit as much as Cate did.

The play more closely follows the book rather than the Disney movie that many are familiar with and that I remembered going to see at the drive-in with my parents years and years and years ago when it first came out but the cast was fantastic and the sets were beautiful and eye-poppingly colorful. The highlight of the play had to be when the character of Burt tap-danced to "Step In Time" up the side of the stage wall, across the top upside down, and then down the other side! Cables or no cables there is no way I'd have ever done such a thing were I in his tap shoes! Nor would I have flown out into the audience and up into the ceiling like Mary Poppins herself did at the end of the play! 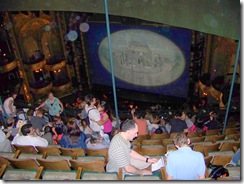 photography is allowed in the theater) and you might notice that there are quite a few orbs floating around in it. Somehow it didn't surprise me when they showed up as The New Amsterdam Theater was originally built in 1903 and is the oldest surviving Broadway venue. It was the home of the original Ziegfield Follies so no doubt has seen many an actor and actress come and go. Renovations began on the theater in 1993 and it officially reopened in 1997 with Disney's The Lion King which played there until 2006 when it moved to another theater and Mary Poppins opened. Disney spared no expense in renovating the theater and it is absolutely gorgeous. Were I a Broadway ghost it would be the place I'd choose to haunt!

After the play we retrieved our rental car and pointed it north out of the city and back to Connecticut. In the backseat were three very tired but happy teens who had just had the chance to do more in two days than a lot of people do in an entire summer. In the front were two adults we were quite happy to have survived a weekend in New York with three teenagers and were heading home with their sanity intact! All in all, a fine time was had by all!

Believe it or not, this slideshow is still just part of the pictures I took! See now why it took me so long to get this post together?!? I gotta start going easier on that shutter button!
Posted by Linda at 7/11/2008