What America Means to Me - An Essay

Awhile back I mentioned that the company I work at was having an essay contest on "What America Means to Me" and I asked my readers what America meant to them to see if I could find some inspiration as I wasn't sure in what direction I wanted the essay to go. People left a lot of good responses that helped me to finally write the post below that I submitted for my entry. 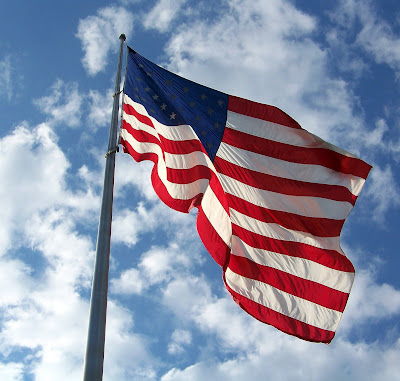 I'm not a historian but if given the chance to become one rather than a dispatcher, I'm sure I would jump at it. When the question is asked, "What does America mean to you?" my thoughts invariably go to the history of this great country of ours. Compared to other countries, we are still but a babe in the woods at 232 years old but in that time the United States of America has grown from a fledgling upstart nation of only 13 colonies who dared to defy the most powerful king in the world to a country made up of 50 states and 6 major territories throughout the world who bow before no king.

When the Second Continental Congress of the United States convened in Philadelphia in May of 1775, following the Battles of Lexington and Concord in Massachusetts, the 56 delegates from the 13 colonies were charged with the task of directing the nation in its goal to become an independent country free from the rule of the British Empire. It was a daunting task that no doubt seemed impossible given the power and wealth of England but the Declaration of Independence was drafted and signed, a Continental Army was formed, and a patriotic fire burned in the hearts of thousands. In spite of the overwhelming odds and the loss of 25,700 patriot lives, America emerged a free nation dedicated to the proposition "that all men are created equal, that they are endowed by their Creator with certain unalienable Rights, that among these are Life, Liberty and the pursuit of Happiness."

Still, happy endings don't come easy and from 1861 to 1865, our country fought its biggest battle on our own native soil with 623,026 American lives lost in the War Between the States. Even though it is popularly believed that the war was fought over the question of slavery, the real issue was States' rights versus the preservation of the Union. America has always been a nation filled with men with strong ideas and beliefs when it comes to independence and individual rights and having fought the British - not once but twice - to maintain that freedom, it became imperative to keep the nation united as one and not split into two separate countries.

In his first inaugural address on March 4th, 1861 the newly elected President of the United States, Abraham Lincoln, implored "We are not enemies, but friends. We must not be enemies. Though passion may have strained it must not break our bonds of affection. The mystic chords of memory, stretching from every battlefield and patriot grave to every living heart and hearthstone all over this broad land, will yet swell the chorus of the Union, when again touched, as surely they will be, by the better angels of our nature."

Eventually those better angels persevered and the war ended but not before profoundly changing our country forever. What began as a bitter dispute over Union and States' Rights, ended as a struggle over the meaning of freedom in America. One needs only to step onto the hallowed grounds of one of the great battlefields like Gettysburg or Antietam or Shiloh to understand how important that freedom was to both sides. That the United States of America stayed as one country and eventually became the most powerful nation in the world is a testament to those men who fought and died for what they believed in.

These days it's way too easy for people to complain about America, especially those of us who live here, but it's still the country that more immigrants want to call home than any other. Yes we have problems with health insurance, yes our gas prices have gotten out of hand (though not as badly as the rest of the world it seems), yes we have political turmoil and our fare share of strife but we're still a republic that was founded on individual freedoms and rights and we have the right to complain about all of those things without fear of being thrown in prison. We have the right to not only want a better life but to pursue it; we have the right to question our leaders and replace them with better ones; we have the right to reach for the ideal, maybe fall short, and find another way to achieve it. We have more rights than most citizens of most other countries and yet we take those rights for granted and fail to appreciate them and the brave men and women who have died protecting those rights.

In spite of the troubles facing our country I am proud to be an American and a patriot. Maybe this country isn't perfect and maybe we don't always see eye-to-eye but when disaster strikes - as it all too often does - we forget all that and rally around the flag and become that "one Nation under God" that our forefathers dreamed of and fought for. I just wish that more people would remember that without having to have two towers fall and thousands of lives be lost but I, for one, still love this country and all that it stands for. We may not be perfect as a country but if you knock us down, we'll get back up again and be stronger for the experience. That's what America means to me.

A big thank you to all of you who gave me your input on what America means to you - it really helped in shaping this essay and getting me inspired. I don't know if I actually won or not but it certainly gave me the chance to climb up on my patriotic soapbox and spout off a little bit. Plus I got to work in a tiny bit of history and for me that's always a plus even though it tends to bore a lot of people to tears.

*The flag picture above was taken here in Norwich on a beautiful June day not too long ago. I knew it would come in handy at some point!
Posted by Linda at 7/27/2008