Roger has tweaked the rules a little bit over at his Creative Photography Contest blog but I think that the changes are for the better and hope that it doesn't dissuade anyone from joining in each week. I think that one the best parts of the contest is having other people who are so much better at photography than I am stop by and give me encouragement or pointers on my pictures.  Plus it gives me the chance to look at some truly outstanding photos entered by other people.

In talking to my Mom the other day she mentioned that my youngest brother had stopped by my blog a time or two and told her that there were just a lot of pictures lately like I thought I was "a photographer or something".  Well, no, I'm not nor do I think I am but I have a good time going out with my camera and trying to get pictures from different perspectives.  Plus I think a picture or two makes my posts more interesting for my readers.  At least I'd like to think so!  Anyhow, enough yakking and on to this week's contest entry!

Last week I posted a picture of a single tree and this week I'm posting a picture of a single rose.  I took this shot today while I was out photographing a few things for another blog post and it just struck me as beautiful what with summer coming to an end and a lot of roses blooming for the final time. I made a few minor adjustments to the original picture with Picasa but nothing drastic. 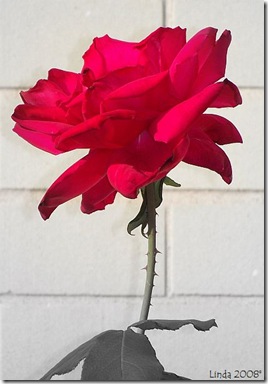 If you'd like to see more entries for this week's contest, be sure to stop by Roger's post for Creative Photography Contest Week #11 and check out the linkies!  If you'd like to enter yourself, you have until Wednesday afternoon to do so.
Posted by Linda at 8/26/2008