Saturday was what on 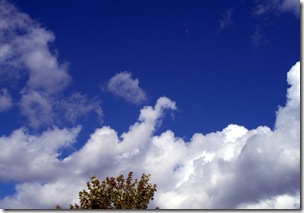 e could call a perfect New England day - the weather was absolutely beautiful with moderate temperatures, no humidity to speak of, and a big blue sky full of beautiful white puffy clouds that just cried out to have their pictures taken. Well, at least to me they did!

The day was made even more perfect as I got to meet some fellow bloggers for an early dinner - the Princess Patti of Late Bloomer Boomer and her entourage, Prince Ralph and Lady A! Patti and I had been talking about getting together again ever since our first meeting last March with Mimi, the Queen of Memes, who designated us both to be Blogging Royalty at that time. Even though she didn't have her scepter with her and have us kneel to accept our royal titles

, I believe that we are still legitimate Blogging Royalty and certainly do our best to act as such when out in public places!

Patti and Ralph live somewhat to the south and west of me and even though we had talked of meeting somewhere in the middle, it ended up being a lot closer to my part of Connecticut as we decided to meet at the Olive Garden in Waterford. Princess Patti and Prince Ralph set out along with Lady A in their Royal Ride with the goal of reaching our designated dining area at 4:00 p.m. but alas, Interstate 95 Northbound ended up being more of a parking lot than a highway so they were running a bit late. After Patti called me on her cell phone to advise me that they were running late, I went into the restaurant and gave the hostess my name along with our table requirements as Ralph is disabled and has an electric chair. I had a feeling the place was going to start to fill up fast as good dining options are at a premium on Saturday nights and I was pretty sure that people would start pouring in soon.

g to the hostess who assured me they would have a nice table waiting for us when the rest of the Royal Party arrived I went back outside and took up a spot on one of the wrought iron benches they have out front and decided to take a few more pictures of the clouds. The moon was starting to come out a little bit so I was trying in vain to get a picture of it also. At that point one of the waiters who was going into work walked by and asked "New toy?" in reference to my camera. I had to laugh as I answered him as my camera is definitely not new though it's most definitely a favorite toy!

Shortly thereafter my dining partners arrived and after being introduced to Prince Ralph and the Lady A, we adjourned to our table in the corner - in the back. It was almost as if they knew that we were bloggers and they wanted to give us some privacy in an area away from everyone else! How thoughtful! Of course, like any good blogger does in this sort of situation, we all whipped out our cameras and started taking pictures! Here you can see Prince Ralph and Lady A doing their best to emulate Queen Mimi! 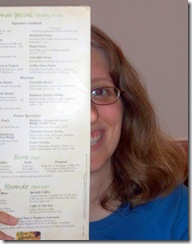 I'm afraid I don't have any pictures of myself and Princess Patti as we were sitting on the same side of the table and it seemed somewhat rude to shove a camera in her face. I do believe that some pictures were taken from the other side of the table, though, and those might show up on Late Bloomer Boomer or Airhead 55, which is the blog of Prince Ralph. I don't believe that Lady A has been bitten by the blogging bug yet but she's probably got her hands full going into her third year of college where she's majoring in history. Now there's a girl right after my heart; I would love to have majored in history! Also, for the record, I thought that Lady A looked strikingly like her mother and had her warm wonderful smile, too. Of course sitting right next to her father, you could see the family resemblance there, too. Along with that she was polite and nice and intelligent and seemed like a wonderful daughter - what a joy she must be to Ralph and Patti!

Dinner began with an offer from the waitress to sample some wine so Prince Ralph had a nice Reisling while Princess Patti and I opted for a Pinot Gregio. It was very tasty but not having had anything to eat for quite some time, I could feel even that slight little bit going to my head. Good grief, am I ever a cheap drunk! Once our dinners arrived and I got some solid food into my stomach, I settled down nicely and don't think I did anything too embarrassing in the interim like dance on the table or break out into a rousing rendition of "Fly Me to the Moon"! If I did, then I truly apologize for actions unbecoming royalty!

This good looking plate of food is my Chicken Parmesan 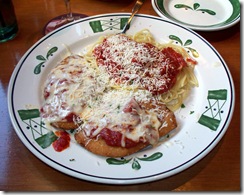 while Patti had ordered the Garlic Grilled Shrimp with vegetables.

Naturally when dinner arrived we all took out our cameras for pictures before digging in - even Lady A who is definitely a blogger-in-training! 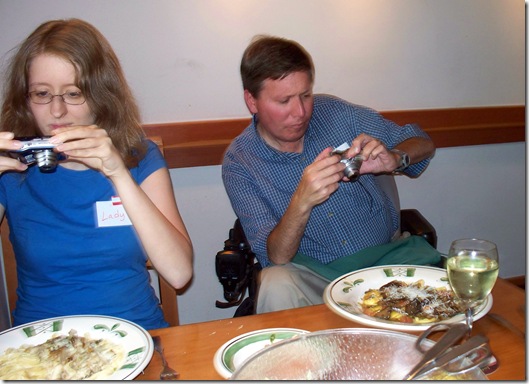 Following our very tasty meals and a lot of good conversation, we split two servings of a really delicious tiramisu between the four of us while Ralph had what looked like a very yummy cappucino and Patti and I had coffee - very hot coffee! As soon as Patti took a sip of hers she had to spit it back out as it was so scolding hot that it burnt her tongue. Thankfully it wasn't so bad that she was lisping for the rest of the evening but it was easy to see that it definitely hurt. I wonder if they could write "Warning! Coffee may be scalding!" on the inside of the coffee cups along with the other writing that's 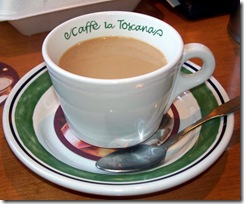 there? Of course, if it's in Italian not too many of us would know what it says but still ... might save someone else from burning the beejeebers out of their tongue!

After dinner, I followed the Royal Family out to the parking lot to take a look at their Royal Ride which is quite the noble steed! With the way his conversion van is set up with his chair lift and such, Ralph can get in and out of the vehicle very efficiently and safely even when he's on his own. It's quite large inside and is very useful when it comes to hauling large objects around as well as stacking as much stuff as possible in for a dump run! The van also comes well-equipped with a bevy of bears in all shapes and sizes! Hey - they make great traveling companions when Prince Ralph is out and about on his own! 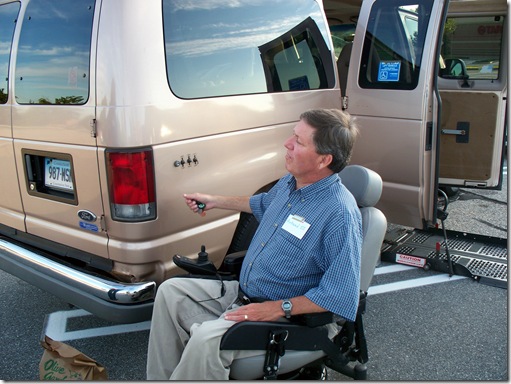 After talking for awhile longer in the parking lot with Patti and I both attempting to take some decent shots of the half moon that was glowing above us, it was agreed that our next meeting should be at their royal estate in Ansonia where I could meet the boys - Linus and Rigby - and tour a little bit of what that part of Connecticut has to offer. That sounds like a wonderful idea to me - I'm thinking it would be very pretty there when the leaves change in the fall.

Prince Ralph and Lady A - it was a pleasure meeting the both of you! As for you Princess Patti, you are just as wonderful as I remember you to be from March! I look forward to spending more time with you all in the future!