With my 50th birthday a mere two weeks away I suppose that my only use of the term "rock out" should have to do with a porch and a rocking chair but either I haven't gotten the memo on that yet or have chosen to ignore it as one of Jamie's favorite bands has become the one I tend to listen to more than any other right now and these guys know how to rock out and then some.

Disturbed hails from Chicago, Illinois and is made up of members David Draiman on vocals, Dan Donegan on Guitars/Electronics, Mike Wengren on Drums, and John Moyer on Bass. They've been around for well over ten years and their music contains 'pummeling riffs and jackhammer beats' that are absolutely fantastic. These guys are hard-rock music at its best so it's no wonder that Jamie is a fan as she's always been the hard-rocker in the family along with her older brother. 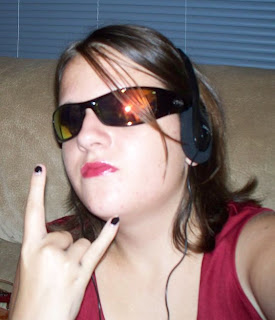 Jamie the Rocker
While she was home this past July we spent a lot of time playing Rock Band on the XBox and, having downloaded the available Disturbed pack, we did our best to rock out with Jamie on vocals and myself on guitar. Amanda generally stayed in the other room and rolled her eyes - especially when I would join in with the singing! Sometimes that kid is just no fun at all! 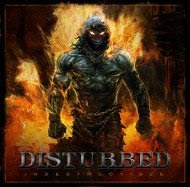 With some of her birthday money Jamie bought the band's latest CD release, Indestructible, but she wasn't really sure her father was going to let her listen to it in Florida so she left it here after recording it on a blank CD in the hopes she'd still be able to listen to it but if it got thrown away, at least it was just a copy. Having liked the songs that we played on Rock Band I decided to pop it into the CD player in the car and it's been the number one thing I listen to ever since. Generally I'll turn it on during the short commute I have to work in the morning which gives me time for one good head-banging song before I have to go face 911 and the stress of trying to provide ambulances to facilities in a timely manner when I ran out of available ones hours ago!

If this doesn't seem like the kind of band that a woman my age should be listening to what can I say but 'oh well'! I listen to a lot of stuff that women my age have probably never even heard of but perhaps that's their loss and my gain. I have always prided myself on being diversified when it comes to music and as long as it's good I'll listen to it and these guys, in my wish-I-knew-how-to-play-guitar-for-real opinion, are good!