"I think I shall miss you most of all." ~ Dorothy, The Wizard of Oz

As a former military brat, member of the Air Force myself, and someone who has moved around a good amount over the years (ten states as of this count), I've had to adjust to a lot of people coming and going through my life.  A good part of our lives is spent meeting people either through our schools, our churches, our hobbies, our jobs, our lives in general ... but life is change and it's a sure thing that a good majority of those people that we meet are only going to be in our lives for a little while before they move out of it in one way or another.  We graduate from high school or college, we move to another city or state, we stop taking that class or participating in that hobby, or perhaps we find another job.

Some of the people that we meet become faded memories while others make an indelible impression on our hearts and our lives that stand the test of time and/or distance.  Those are the people that it becomes the hardest to say good-bye to and even though I should be used to such things by now I'm not really and if I try to tell you otherwise then you can certainly call me a liar because that's exactly what I am.

I've had to say goodbye to an awful lot of people that I've cared about over the years and lately I've been having to say it way too frequently at work as people who have come to mean a lot to me are advancing their careers and leaving American Ambulance behind.  I know that in the big scheme of things that's how life works and I certainly don't begrudge these people the chance to move on to a job with possibly better wages and benefits that may or may not be closer to home; to head off for schooling that will help them to reach their final career goal; to do what's best for their families; or to just make a change because they feel they need one in their lives.  No, I don't begrudge them those things at all but that doesn't mean I'm not going to miss them and that going to work won't be quite a bit less enjoyable then it was when they were there.

Change is inevitable and is oftentimes a good thing, but that doesn't mean that change doesn't hurt a bit when someone you've come to think of as more than just a fellow employee works his or her last shift with you.  Monday night I worked my last shift with two of those someones and my life now feels a bit emptier for having done so and I know that when their days to work roll around again and they aren't there, there's going to be a hole there that no one else can fill. 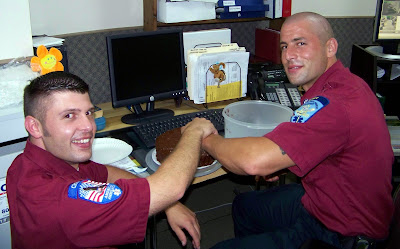 This is JM and Seth - I believe I may have mentioned them a time or two before in previous posts about EMS Week or other work-related things; I think I might also have mentioned that they didn't make guys who looked like this back when I was their age - or maybe I thought I just mentioned that!  Seth is the one who is doing a Howie Mandel impression and seems to have misplaced his gorgeous hair but he assures me that it will be growing back in, especially considering his wife hates the current Jean-Luc-Picard-wannabe look!

These guys are not only darned cute but they have two of the best personalities I have met in a long time.  They first met working at American Ambulance but you'd never have known it as they acted like they had known each other forever; they could be brothers, they could be cousins, or they could just be great friends who look and act quite a bit alike.   They were also two of my brightest rays of sunshine when a day was starting to get a bit overwhelming and dismal.  They made me laugh, they made me smile, and they made me feel like I was a great dispatcher - in other words, they made me feel good about myself and my job.

Seth is leaving American to go work at a rival ambulance company that just happens to be a five-minute commute from his home and which offered him a deal he couldn't refuse.  He recently got his paramedic license and will be using it to help save lives in northeastern Connecticut, which is fortunately where my mother lives.  Should I feel a bout of chest pain or difficulty breathing coming on, I'm going to drive to my Mom's house and call 911 from there as long as I know Seth is on duty!  Even if I feel like I'm going to die, I won't care as long as he's the one doing the patient care!

JM is going to be attending paramedic school in Hartford so he is leaving American on a full-time basis in order to pursue his paramedic license.  It's a grueling school but I've no doubt he's up to the challenge and will be an excellent paramedic when he's done with the program.  He's going to try to pick up shifts at American when he can but I get the sneaky feeling his schedule is not going to be any too free all that often.  Based on that, it feels like he is leaving, too.

To have "lost" one of these guys was bad enough; to have lost both of them ... well, suffice it to say that I am in mourning!  Even though I am happy for both of them and wish them both luck on their chosen paths, I will miss them both something fierce.

Despite my sadness though, what's a final shift without a cake?  Seth had mentioned before that he loved chocolate and that no one had ever made him a cake (which I still find very hard to believe!) so I made a chocolate cake with a chocolate cream cheese filling and chocolate frosting. 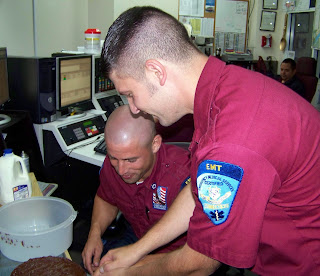 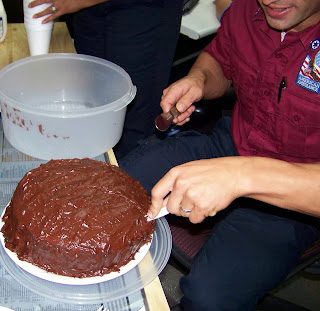 and we made sure to have some nice cold milk to wash it down with because what's a rich chocolate cake with chocolate filling and frosting without milk?!  Pretty overwhelming, that's what!

Despite all of the chocolate, though, it really was bittersweet for me as I was happy that they liked the cake but sad about the occasion that warranted it.  When they went back out on the road to transfer a patient out of a local hospital emergency room back to her nursing home, my last radio transmission to Seth was darned near impossible to get out around the lump in my throat because I already missed him even though he has assured me he's "only a text message away" and won't be gone from my life forever.

Still ... goodbyes are hard and they don't get any easier as you grow older.  Experience has taught me that.  I am really going to miss these guys.

Good luck to you both, Seth and JM.  Thank you for making my job that much more enjoyable and for making me smile and laugh even when I thought I didn't want to.  You're the best and when I say that, this time there's no way anyone can call me a liar because it's true!
Posted by Linda at 8/19/2008