"Steeplechasing" in Norwich, Part I

My friend Patti of the blog Late Bloomer Boomer recently did a series of three posts entitled Steeplechase, the first of which you can check out here. Patti decided to take a drive around her town of Ansonia, Connecticut and take pictures of some of the lovely churches, and in particular the steeples, that could be found there. I told her I thought that it was an excellent idea for a post and hoped she wouldn't mind if I "borrowed" it - or did I say "steal"?? Hmm ... well, either way Patti told me to go for it so I decided to take to the streets of Norwich with my camera in hand and chase a few steeples of my own.

Like Patti before me, I'm going to do this in parts so as not to make this too incredibly long of a post. Plus I think I have a few more steeples to chase down before I have all of them that I want! You never know where steeples are going to be hiding so it might take me some time to find the more elusive ones around town!

I'm going to start this series with three of the Catholic churches that can be found here in Norwich - two of which are somewhat similar in style and structure and one that looks completely different from the other two.

The first church on my search was Saint Mary's Roman Catholic Church located in the Greenville section of Norwich. The original church was dedicated on March 17th, 1845 but by the end of the 1850's it was inadequate to accommodate the increasing Catholic population in Norwich so in 1857-1858 it was enlarged to its current size and was rededicated on May 16th,1858. 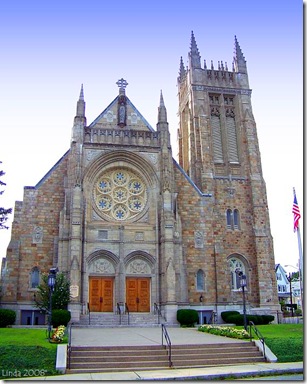 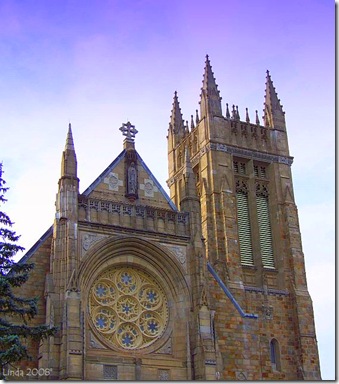 In 1868 it became apparent that Norwich was need in of a second bigger church so ground was broken on land that belonged to Saint Mary's Parish on Broadway for a magnificent Gothic structure that was to become Saint Patrick's Cathedral, the crown jewel of the Diocese of Norwich. 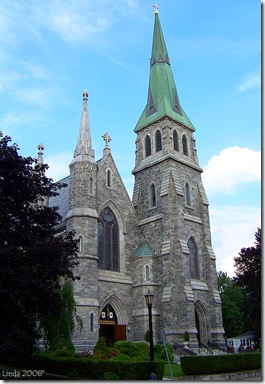 The cost for building this magnificent structure with a main tower that stands 216 feet high was estimated to be $300,000 which was a LOT of money back then. All of the money for the church was raised by parishioners who also dedicated their time and labor to build their new church which was formally opened and dedicated on September 28th, 1879. 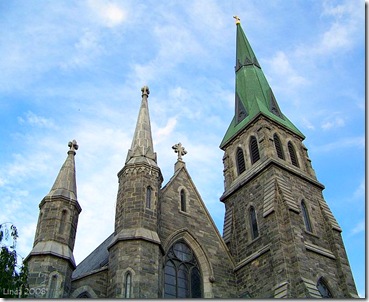 The last church on Part I of my Steeplechase is the Sacred Heart Church in Norwichtown. So far I haven't been able to find out too much about this church other than that it has a cornerstone dated 1837. 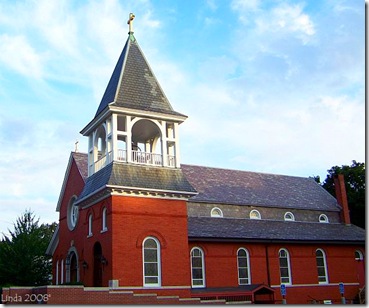 Sacred Heart is definitely a more "humbler" church than the other two Catholic churches I've featured in this post but I think it's a lovely church nonetheless with a beautiful wooden steeple that holds a lovely bell. 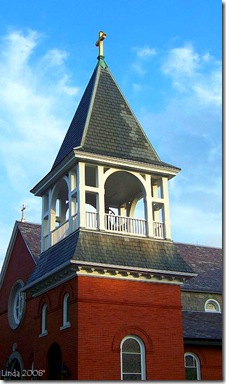 I hope you've enjoyed going on this Steeplechase with me and seeing just three of the churches that grace Norwich and I certainly hope you'll be back for Part II and subsequent posts that are sure to follow. Why, I even bet that if you'd like to start your own "Steeplechase" that Patti wouldn't mind at all - would you, Patti?
Posted by Linda at 8/15/2008