If it's Monday then it must be manic at It's a Blog Eat Blog World, blog-home of my friend Morgen who is the host for the Manic Monday Meme where each week Mo gives his minions a word and then we scurry about and do our best to come up with a post based around that word. This week Morgen reached into his bag of words and pulled out the word "BIG".

Hmmm ... what to do for that? Here in Connecticut, the weather Sunday evening was about as perfect as you're going to get in New England in August with moderate temperatures and low humidity so I asked Amanda if she wanted to break away from the computer for a little while and head out in search of "BIG" with me. Once I mentioned the search would include ice cream that was enough for her to put up an away message and throw her shoes on!

After jumping into my trusty Mazda, I pointed it East and we took a drive out of town on Route 165 heading towards Griswold where one can find one of the biggest attractions on a summer day in this part of Connecticut ...

Buttonwood Farm first opened for business in 1997 making their own ice cream from their own dairy cows right there on the farm and to say that it's absolutely delicious would not be doing it justice!

This is my big double-scoop waffle cone with Almond Joy and Coffee Mocha Crunch ice cream.

Here we have Amanda's big cone of Chocolate Silk and Chocolate Almond Fudge and, as you can see, she had already taken a big lick out of it before I grabbed the camera! Who can blame her?? 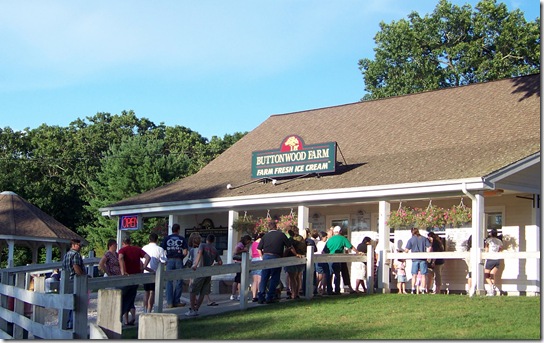 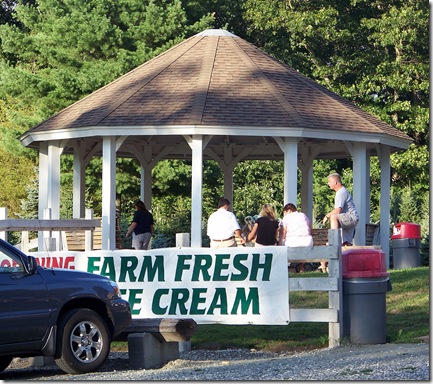 Some of that big crowd likes to eat their ice cream underneath the big gazebo next to the ice cream stand.

In addition to the fabulous ice cream, a lot of people go out to Buttonwood Farm to look at their acres and acres of beautiful sunflowers. Each year they plant thousands of plants for people to come and enjoy. When the big blooms are cut, the bouquets are sold for $5.00 a bunch with 100% of the proceeds going to the Make-a-Wish Foundation. The program is called Sunflowers for Wishes and it's a big fundraiser for the non-profit organization that is devoted to making wishes possible for children with life-threatening medical conditions.

People come from miles away to see these big sunflowers and to take pictures of them - just like Amanda and I did and who can blame them? Aren't they beautiful?

While we were admiring the sunflowers, Amanda was startled by a very big ant that was climbing on the stone wall next to her. She shrieked and took a big step backwards but then decided a picture was in order! 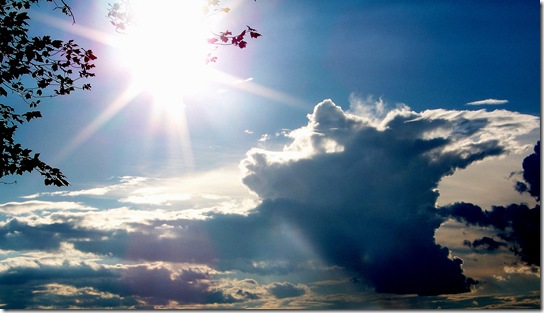 There were some big clouds hovering over the sunflower fields so, of course, I had to take a picture of them along with the big sun shining in the sky!

On the way back to Norwich I noticed that the corn was getting pretty big so I pulled over to take a picture of it, too, as this post is all about BIG, right?

These ears will eventually get bigger but for now that was more than big enough for a picture for this meme!

Before I continued on to find some more "BIG" pictures, I dropped Amanda off at home as she wanted to get back to her latest big obsession - World of Warcraft. She used to play it awhile back but the file was too big for the computer and I had removed it but after she took off some other stuff and reloaded it last night it didn't seem to take up as much room and she could go back to working on her characters.

This is Amanda's Druid Night Elf; she's only a Level 12 which isn't too big but I'm sure that will change once she spends way too much time trying to level up.

This one is her other character which is a Level 6 Undead Rogue, doesn't that just sound lovely? Hey, Asara, any of this sound familiar?!? I know that you're definitely big into WoW! 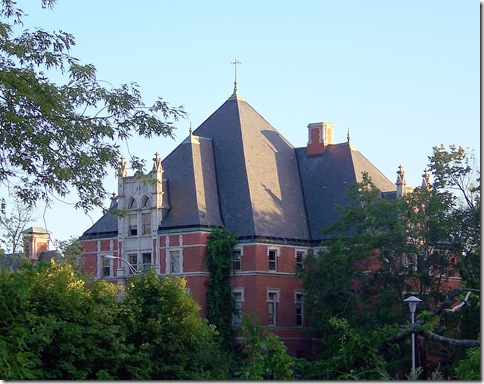 After dropping Amanda at the house I continued on my hunt for the next "BIG" thing next stopping at the old Norwich State Hospital grounds which is right up the road from my house. I was very careful not to actually go on the hospital grounds as they are clearly marked "No Trespassing" with big signs all over the place but I figured that the security guards that roam the place in SUVs wouldn't throw too big of a fit if I was just on the edge of the property using a zoom lens. I didn't see any of them to tell me otherwise so I figured it was okay but I didn't take a big chance and dilly-dally too long!

Built in 1904 and covering over 100 acres, the Norwich State Mental Hospital for the Insane was one of the biggest mental health facilities in the State of Connecticut until it closed in 1996. The patient population was at its biggest in the 1950's with over 3,000 patients and rumors now abound that the grounds and buildings are haunted by some of the lost and tortured souls who were treated here. The place is a big attraction for local ghost-hunters, or wanna be ones!, and that's part of the reason for all the big security. This picture shows the Administration Building which was obviously quite grand-looking but is now falling apart big-time as it sits there abandoned and neglected.

This picture shows the back side of the same big building pictured above. I took it from a vantage point across the Thames River in one of the big parking lots of the Mohegan Sun Casino. 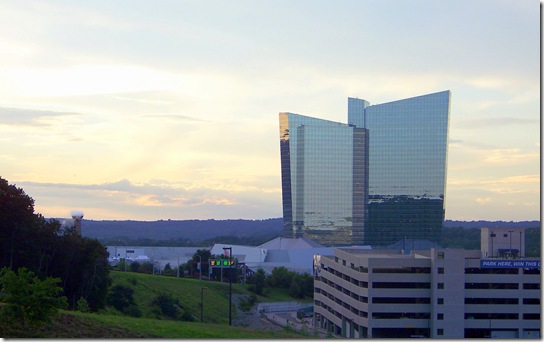 Speaking of the Mohegan Sun Casino, that would be this place - the second biggest casino in the world and literally sitting in my backyard! That big shiny building is the hotel with the casino sprawled below it. I used to work here as a blackjack dealer back in 2002-2003 and will be going back to work here soon as a part-time dispatcher for the Mohegan Tribe at their Public Safety Complex once I get through with my background investigation and all. No doubt I'll fill you in more on that in future posts!

Did I mention the Thames River? Ah yes, I believe I did! That would be this big river! I took this picture from the Mohegan Sun grounds looking towards Norwich. I live on the right side of the river as you're looking at it and work on the left side just across from the Marina at American Wharf (which my big boss also owns!). I've yet to get them to put in a zip-line for me so I could just skip the whole driving commute but at least I only have about 1-1/2 miles through downtown to get there. That really helps big when it comes to saving on gas! 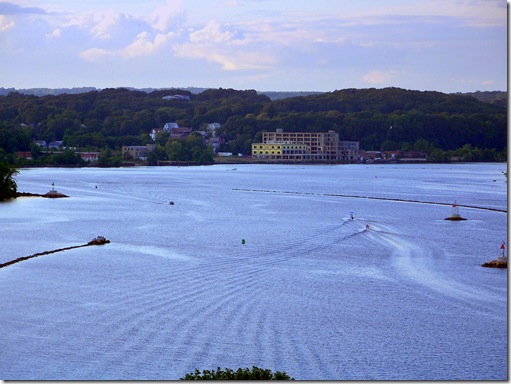 This is a slightly different angle of the big river that runs south for 15 miles through eastern Connecticut. The Thames (rhymes with James) River is primarily a tidal estuary along which is located the U.S. Coast Guard Academy in New London and a U.S. Navy Submarine Base in Groton. The river forms at the junction of the Yantic and Shetucket Rivers in Norwich and ends at the mouth of the Long Island Sound in Groton near Eastern Point Beach where I have taken fireworks pictures. 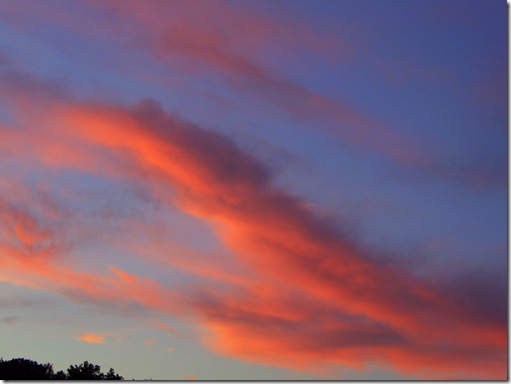 Finally, I had reached the end of my "BIG" journey but on my way back home I saw these beautiful big red clouds floating in the sky over my head and how could I possibly resist taking a picture of them? I couldn't! You may have noticed that I am a big pushover lately when it comes to clouds!

I hope you enjoyed this "BIG" journey through my little part of Connecticut! If you'd like to see what other people thought of when Mo said "BIG", be sure to check out the Big Linkies at It's a Blog Eat Blog World!