In an incident that has been called a "terrible nightmare", a 15-year veteran of the Lafourche Sheriff's Office in Louisiana, was transported early this morning to Thibodaux Regional Medical Center where she was pronounced dead after being run over by a burglary suspect in a stolen truck. 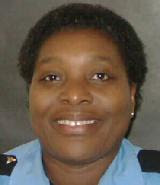 Deputy Sheriff Martha Woods Shareef, age 53, had responded to a local convenience store following the activation of a burglar alarm when the store was broken into at approximately 2:30 a.m.  Upon arrival at the scene, Deputy Shareef approached a male suspect who ran over and dragged her with a stolen vehicle as she approached. Dispatchers heard a loud scream over her mobile radio and then shortly after an employee of the convenience store presumably took the injured deputy's radio and spoke to dispatchers advising them that an officer was down and needed an ambulance while also giving a very good description of the vehicle.

The suspect, described as "a monster" by Sheriff Craig Webre was captured approximately four hours later after leading police on a high-speed chase, ditching the truck, and swimming across the bayou where he hid under a house to evade arrest. Webre said his deputies are working to gather evidence against the suspect. “We are piecing everything together to present to the D.A.’s office,” he said. “I hope this results in the execution of the person responsible for taking Martha’s life and I just hope I'm alive when he breathes his last breath on his journey to hell."

At a news conference Wednesday afternoon, while calling Woods' death a “terrible nightmare", Sheriff Webre said, “I keep thinking I will wake up, and it will not be true. There are hardly words that would adequately express the sentiments of my whole office and myself. Losing an officer is such an unbelievably traumatizing event,” he added. “Martha was the epitome of a person who overcame every challenge, an example of someone who was universally respected.”

"She will be sorely missed. She was a girl who sang the star-spangled banner at all of our functions that we had at the sheriff’s office. She was much loved," Public Information Officer Larry Weidel said.

Deputy Shareef, who was well known for her smile and her singing voice, served as a patrol officer, former D.A.R.E. officer, and a patrol supervisor during her Sheriff’s Office tenure. She is survived by her husband, Rashid, an adult daughter, two sisters, and five brothers as well as an entire community that is shocked and stunned at this senseless act of violence against one of their own.

I send my thoughts and prayers to Deputy Sharee's family as well as members of the law-enforcement community, her church family and other community members who knew her.  May this brave officer rest in peace.
Posted by Linda at 8/20/2008