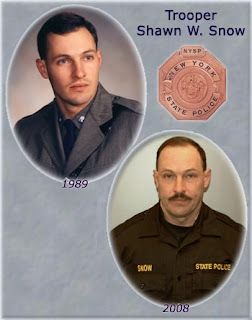 In what could only be described as a freak accident, a veteran New York State Trooper was killed on Sunday, August 3rd, when he was electrocuted while assisting in changing a flat tire on a vintage firetruck.

Trooper Shawn W. Snow was assigned to the commercial vehicle enforcement unit of the New York State Police and was responsible for inspecting trucks crossing the Ogdensburg-Prescott International Bridge and local roadways. On Sunday, at approximately 4:40 p.m., a vintage fire truck from the Canadian Fallen Firefighters Foundation was being returned to Canada from a parade near Syracuse when a tire went flat near the Ogdensburg-Prescott International Bridge located about an hour south of Ottawa.

Trooper Snow went to assist the vehicle's driver in changing the flat and was underneath the truck fixing the tire while the driver of the vehicle, Pierre Surprenant of Quebec, Canada, was extending the truck's ladder to distribute the weight away from the flat right rear tire. As the truck was being jacked up the ladder suddenly dropped and hit a high voltage power line which electrified the area and killed both men instantly.

"How it ended up touching the wires, whether a piece of equipment failed and it slipped and touched the wires, or whether the act of jacking it up higher on one side caused it to touch, we just don't know yet," said Ogdensburg Police Chief Richard Polniak.

New York State Governor David A. Paterson has directed that flags on State government buildings throughout New York be flown at half-staff on August 7, 2008 for a period of 24-hours in honor of the fallen officer stating that, “I was saddened to learn of the tragic death of New York State Trooper Shawn W. Snow. His death reminds us of the dangers which our brave troopers face everyday while protecting and serving the public. Our state mourns alongside Trooper Snow's family, friends and the entire law enforcement community. We hope that his example of selfless devotion to the people of New York will serve as an inspiration to us all.”