There's a full moon out tonight but I'm not sure if I'm going to get the chance to go chase it down and try to take pictures or not as I'm working the evening shift so that a fellow employee can spend time with his family to celebrate his daughter's birthday. Actually, when Kevin first asked me about covering the shift for him I almost said "no" because I wanted to go out and take pictures but then I thought that was silly and took the shift instead. If the weather is good, perhaps I'll be able to go take some pictures when I get out of work at 11:00 and if not, there's always next month when I believe that the full moon will come around while I'm at the Rhode Island shore vacationing with some fellow bloggers. Now that would be a good time to go take some pictures!

In the meantime, I thought I would share this picture with you that I took last week while I was skulking around in the dark at Eastern Point in Groton. As you can see, there were a few clouds out and about but I thought it just made the moon that much more interesting and I was still able to capture a star or two. I named this picture "Night Sounds" because it was night and the moon is reflecting off of the Long Island Sound - kind of corny, eh? 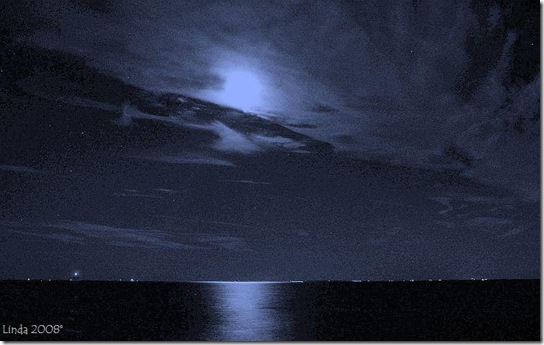 Maybe it's just me but I find this picture to be very peaceful and serene as I just love the moonlight reflecting off of the water. I think it's definitely one of my favorites out of the pictures I've taken recently.

So tell me, what do you think?