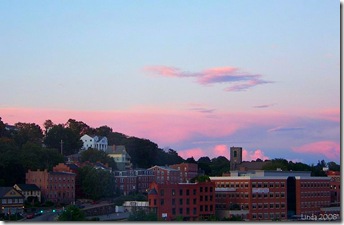 There is just about nothing worse than sitting in dispatch and looking out at the beautiful evening spread out in the city below me and knowing that I'd much rather be out there with my camera than sitting inside answering 911 calls. No offense to those who need help but when the sky looks like this outside - that's where I want to be!

As I drove home Saturday night it was almost 11:30 but the full moon was shining so brightly and it was such a beautiful night that I knew I had to pick up my camera and head back out the door in search of some night shots. After grabbing my trusty Kodak Z712, my tripod, and extra batteries (just in case) I decided that my 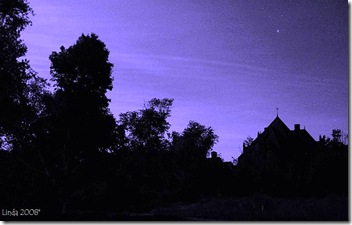 first stop was going to be in the vicinity of the old Norwich State Hospital. It's just down the road from me and I've always wanted to try to take some pictures there at night. Of course, you can't just stroll around on the grounds as it's posted about every 50 feet with "State Property - No Trespassing!" signs and there are security guards who patrol in SUVs who make sure that's enforced but I figured if I parked my car down by the Hebrew cemetery and walked back up the road in front of the grounds, then I wouldn't be trespassing. After all, there is a sidewalk so it should be legal, right?

After parking under the old tree near the cemetery, I walked about 500 yards back up the road and found a spot across from the old Administration Building (which I've posted pictures of before) and set up my tripod. The amount of traffic still out and about was ridiculous but no o 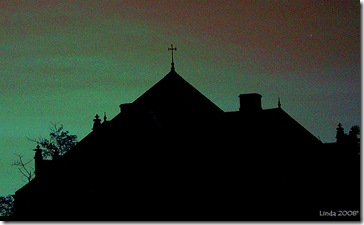 ne stopped to ask me what on earth I was doing so I figured I was okay, especially as there were no security officers in sight!
Norwich State Hospital has a reputation for being haunted, which is understandable considering the number of lost souls who once made their home there, but as I stood in the dark with moonlight streaming down on me I didn't feel creeped out or anything like that. I think I might have felt better if I'd had someone with me but I wasn't feeling panicky so much as I was a little nervous that some security officer may come along and question me even though I wasn't doing anything wrong! Still, I wouldn't have been surprised to come home, put the pictures on the computer, and find strange 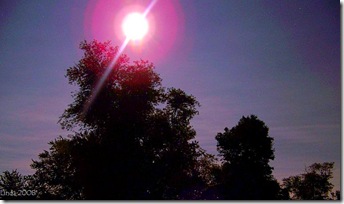 things on them. As it turned out, there wasn't anything unusual but it would have been cool if there were! Guess I'll have to go try again sometime!

After taking about a dozen pictures, I walked back to my car, debated shooting some pictures at the cemetery but then dismissed that idea, and headed back towards downtown Norwich. Considering some of the people that walk around downtown at night, I think I was more nervous there then outside of a reportedly haunted abandoned asylum but obviously nothing happened or I wouldn't be writing this post today! 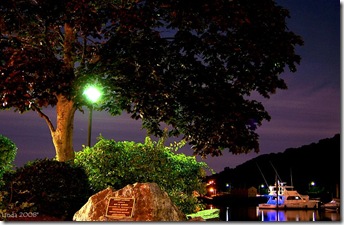 My first stop was Howard T. Brown Park next to the Norwich Marina, a spot I've gone to before on a full moon as I really like trying to take pictures of things reflecting off of the water. This picture shows the marker and tree next to the boat launch which is usually quite busy regardless of what time it is day or night as a lot of people like to fish on the Thames River. Surprisingly there were no boats being launched last night but there were some people at the park fishing off the docks or hanging out at the gazebo. I figured that as long as I left them alone, they'd leave me alone and that worked out just fine! 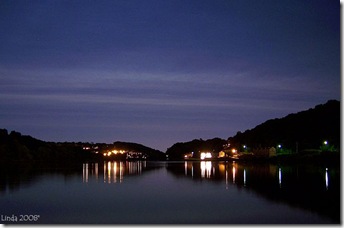 The moon was so beautiful that even though it was getting to be close to 1:00 a.m., it wasn't what you could call dark at all. This picture was taken from the dock looking down the river towards where it meets up with the Long Island Sound some 15 miles away. I really like the way the river looks like glass with the lights from nearby buildings reflecting off of it. Norwich just looks so much nicer at night! 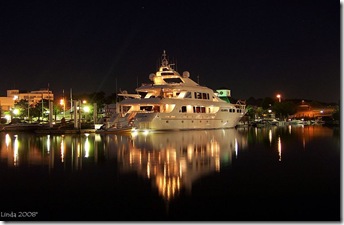 Speaking of nice, it looks like someone's ship came in while they were there to meet it! This ship has been docked at the marina since Friday evening and it sure is nice as well as very, very big! I would imagine that it costs more to fill up its tanks then I make in a half a year or longer! All I can say is that it must be nice to have money ... I'm sure that I'll never know myself! 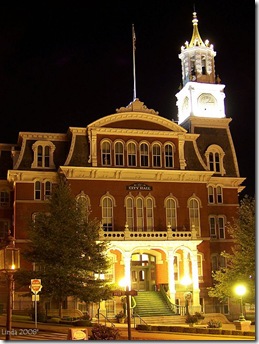 I decided that since I was out and about and it was such a nice night that I would make a few more stops before heading home so I turned my car and camera towards Norwich City Hall, a very beautiful building regardless of the time of day! The only problem I have with it is that there's just no way to seem to get a good angle for a picture that doesn't show some sort of street sign or another. The City Fathers really ought to look into that and rectify that as I'm sure lots of people take pictures of this gorgeous building, though most probably do it at a "normal" time of the day! If you look closely, you can see by the time on the clock tower that it was about 1:15 when I took this picture but I had one more stop I wanted to make before I finally put the camera away and went home. 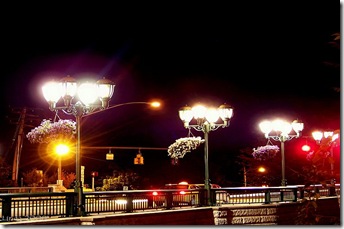 On my commute to work, I have to cross over the Water Street bridge which connects the Laurel Hill side of Norwich - where I live - to downtown Norwich. As it was falling apart, the bridge was rebuilt a couple of years ago and is really very pretty. Antique lighting was used and every summer the City hangs baskets of petunias from each light. This picture doesn't really do the bridge justice at all but until I can figure out a better angle, it will have to do! Even at 1:15 in the morning there were a lot of cars crossing over the bridge so it really wasn't a good idea to try standing in the middle of the road to get a picture! Don't people ever go to bed??

Even though there were a lot of other places that I would like to have explored and taken some night pictures of, I finally decided that common sense should really prevail and that I should pack it in and go home. After all, my aunt reads my blog and she's going to tell my mother that I'm wandering around Norwich late at night to which I'm sure my mother will roll her eyes and decide that I am plain nuts! What I really need is to find someone who's willing to go out and prowl around with me at night as I'm most definitely a night person and have found that I really enjoy taking night shots. The world just looks so much different when the sun goes down and the moon comes up; it takes on an almost surreal quality and let's you look at things differently. Personally, I like what I've been seeing! 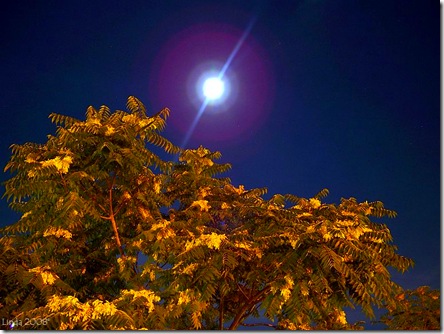