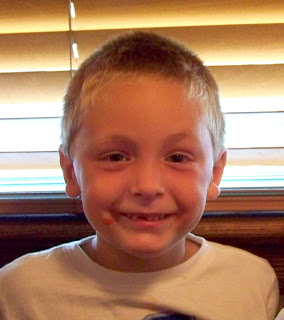 Amanda and I took a ride over to Rhode Island yesterday evening to visit my son and his family who live not too far from Westerly and not quite an hour from Norwich. They were having a birthday party for Christopher who turned five earlier this month but being the unsociable person that I am, we didn't get there until everyone else had left. Well, that and it was raining cats and dogs and I wanted to wait to make the drive over there until the weather had cleared up a little! In order to get to Mike's house I have to drive past Foxwoods Casino and the traffic can be horrendous, especially on weekends. Driving in pouring rain and too much traffic is just not my idea of a good time so I avoid it when I can. Yeah, yeah - excuses, excuses! 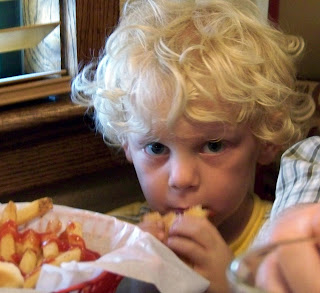 I had called Mike and told him we'd be there around dinner time so perhaps we could order pizza or something but after we arrived he suggested we go to the local Applebee's instead being that they were pretty "pizza'd out". Sure! Sounded good to me so off we went for a nice dinner and a chance to visit and catch up.

While Chris and Matt happily dug into their kids' meals, Amanda and Mike took the time to catch up a bit. Even though they don't look a whole heck of a lot alike (at least certainly not in the hair department!) ... 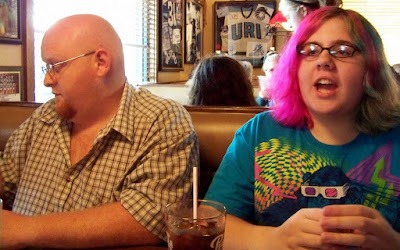 ... they have no problem talking about music, video games, comic books, World of Warcraft, caped super heroes, and all that sort of stuff. While I sat across from them and snapped this picture it dawned on me for the very first time out of the blue that all three of my children wear glasses! Hmm, does that count as an epiphany?!? Amanda said I obviously passed down a "bad eye" gene but considering that I don't wear glasses myself - yet! - I am going to blame that on their respective fathers. Now if she wants to blame me for the sarcasm gene then I will certainly take full credit for that!

After a nice dinner with lots of french fries and ketchup for the boys, we parted company and Amanda and I went in the direction of Misquamicut Beach so that I could try out my hand at taking some pictures of the ocean before it got too incredibly dark. Weather-wise it wasn't the best of days to begin with and by the time we got down to the beach it was going on 9:00 and there wasn't much light to work with. Still - stubborn is as stubborn does and I decided that I'd try my hand at some more night photography and edit it a bit when I got home. Which I did with these pictures being some of the results ...

This picture shows how dark it really was when we got there, it was taken using a flash.
The rest were taken using night mode on my camera 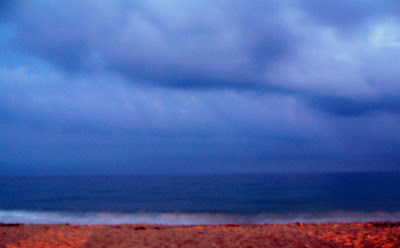 The clouds touch the ocean while the waves meet the sand. 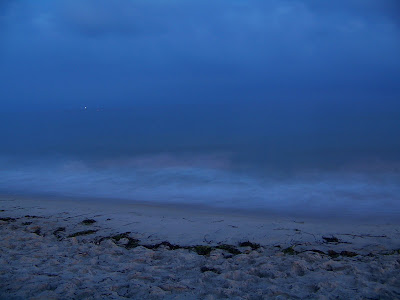 Dark waves roll up on shore. 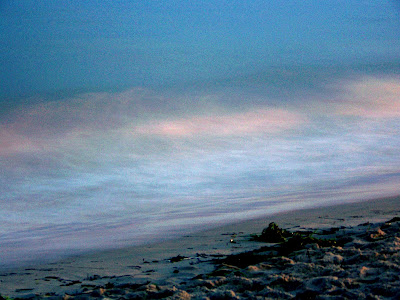 This may not look like a wave but really it is!
Truth be told, I rather like this effect. 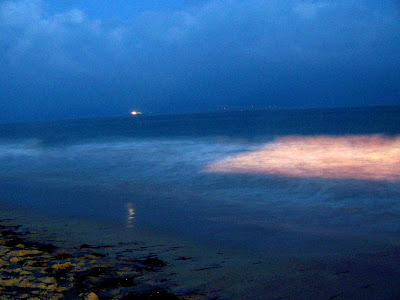 Light from a far away boat reflects off the sand.
And yes, that's another wave believe it or not! 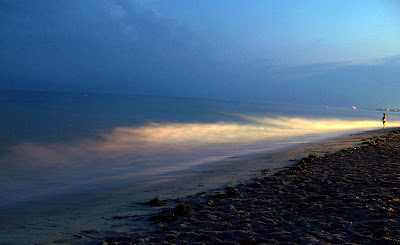 A lone figure stands in the distance watching the waves come in.
This video shows you exactly how dark it was on the beach by the time we left - or maybe it doesn't because it's so dark you can only see the occasional whitecap! It sure sounds nice, though, doesn't it? I just love the sound of waves crashing ashore - it's just so peaceful and relaxing.

I'm now inspired to go back to the ocean when I can actually see it and try taking some more pictures and videos - ones that you might actually be able to see rather than just hear! I'll be sure to let you know if that happens!
Posted by Linda at 8/03/2008