Even though I have lived in Norwich for almost 8-1/2 years (a lifetime achievement for me!), were you to ask me where I'm from I would answer Canterbury, Connecticut as that's where my roots originate.  In spite of the fact that my Dad was career military, my parents lived in Canterbury when I was born and whenever Dad would get shipped overseas, it was back to Canterbury (or close to it) that we would return.

The vast majority of my relatives have lived in Canterbury at one time or another and a lot of them still do - including my mother.  Both of the grandparents that I grew up with made their homes in Canterbury, though initially my father's mother lived in the small town of Scotland just west of Canterbury before eventually moving to the little house across from my aunt and uncle that they built for her.

My beloved grandfather that I have written of several times before in this blog was born and raised in Canterbury - eventually building his own house across the street from his childhood home.  It was at his house that some of the best memories of my life occurred with a lot of those memories occurring on Sundays and beginning in this church. 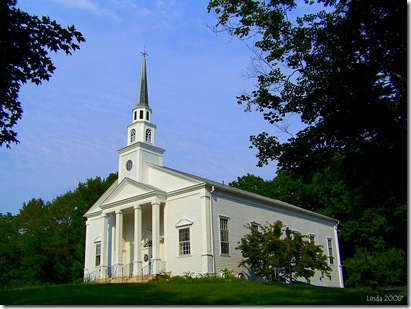 This is the First Congregational Church of Canterbury and it stands on the Canterbury Green about a mile or so up from my grandfather's former house on Route 169.  This isn't the original First Congregational Church as the first building was destroyed in a fire when I was quite young but I still have memories of swinging on the bell rope as a very young child at that church when my grandfather would let us try to ring the bell for Sunday services.

My grandfather was a member in good standing of the First Congregational Church and served as Sunday School Superintendent for many years as well as being a Deacon.  He faithfully attended church every Sunday and customarily sat in the second pew on the right side.  When we were in Connecticut during the times my Dad was overseas, I went to Sunday School here and afterwards I would always meet my grandfather and attend Sunday services with him.

Sunday School classes were held in the basement of the church (now called Hart Fellowship Hall in honor of my grandfather) and after class was over I would go upstairs and wait on a bench in the vestibule until my grandfather would walk through the door.  At that time I would always jump up and give him a big hug (my grandfather gave the best hugs ever!) and then I would accompany him to "our pew" where I would always be so proud to be sitting next to him as he sang the hymns of worship in a clear, unfaltering voice and listened intently to the sermon.  I loved going to church with Gramp and truly missed it when we weren't living in the area.

Sunday services were always followed by Sunday dinner at Gramp's house.  By the time Gramp and I would return to his house after services were over the place was bustling with activity as my mother, brothers, aunts, uncles, and cousins were all gathered for the weekly ritual.  Before church my grandfather would always put a roast beef into the oven that was generally accompanied by the best scalloped potatoes on the East Coast and by the time we got there after church, just about everything was ready including fresh vegetables from Gramp's own garden and mashed potatoes that I generally got the honor of mashing once my Aunt Mary taught me how to get the lumps out!

The adults and youngest of the children would gather round the big dining room table while we 'older' kids got to eat at the kitchen table.  Myself, my oldest brother Mark, my cousins Steve and Dave who were brothers, and my other cousins Diana and Pat who were sisters, generally made up the group in the kitchen though sometimes one of my younger brothers or cousins might get to join us, too.  Along with the fantastic meal, we drank bottle after bottle of my grandfather's homemade root beer that had an amazing kick to it unlike any other root beer I have ever had!  After dinner there were was always a cake which was made by my grandfather that had the funkiest colored frosting imaginable and sometimes his fantastic bread pudding.

Following dinner the adults would retire to the living room while myself and the cousins would tend to kitchen clean-up and dish duty. Sometimes one of my older uncles would join in and then even doing the dishes turned into a fun task.  When the cleaning up was done we'd all spend the day at Gramp's either running around outside and driving the little tractor around the fields or, if it was winter, sledding down the hills behind the house.  Oftentimes my grandfather would pile all of us kids into his car (usually an old State Police cruiser that he had bought at auction) and we'd go for a ride somewhere in the countryside. If the weather was bad we'd stay inside playing board games like Clue or card games like Hi-Lo-Jack and no Sunday was complete until Gramp had read us the Sunday Funnies from the local newspaper.

When my grandfather was alive 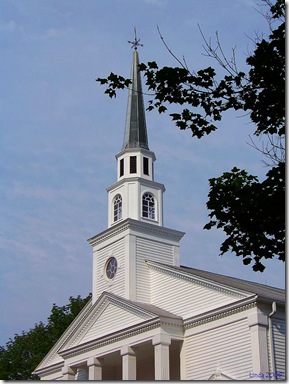 Sundays were absolutely the best day of the week and I always looked forward to them knowing that I got to spend time with my grandfather, my cousins, and the rest of my family.  Sundays were definitely special back then but all that ended on August 22nd, 1972 when my grandfather died from leukemia long before he should have.  Thirty-six years later I can still remember how special Gramp made Sundays and how special he always made me feel.

Whenever I go to visit my Mom, I drive past the church that I once spent so many happy hours in and that, technically, I'm still a member of.  As all things do over time, it's changed quite a bit since my grandfather attended there and I sat proudly by his side but the sight of it will always bring back many happy memories of a time when Sundays were special and a young girl knew that someone loved her unconditionally.
Posted by Linda at 8/24/2008