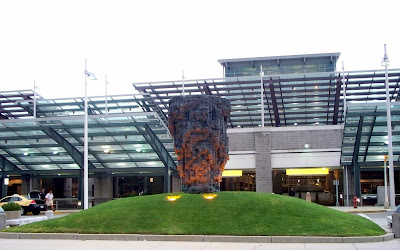 Way sooner than it should have - or we would have liked it to - the day came to take Jamie back to the airport in Rhode Island for her flight back to Florida. That day was this past Thursday and at 5:30 in the evening we set out from Norwich to make the less than one hour drive to T.F. Green Airport. It was a beautiful evening as far as the weather goes and we had the windows down as Jamie blasted 80's music from the CD player. "White Wedding" by Billy Idol, "Walking On Sunshine" by Katrina and the Wave, "Addicted to Love" by Robert Palmer ... all songs from back when I was much younger and life was much less complicated. I sang along a little bit but not as much as I would have had we been going someplace fun rather than to the airport to send Jamie back down to her father's. No matter how many times I do this airport thing, I don't get good at it.

We arrived about an hour before Jamie's flight was scheduled to take off at 7:45 and got her boarding pass and luggage checked in. The good folks at Southwest were nice enough to give me a Non-Passenger Entry pass so that I could go down to the gate with her so after that it was off with the shoes and through the security checkpoint while passing under the watchful eyes of the TSA agents. 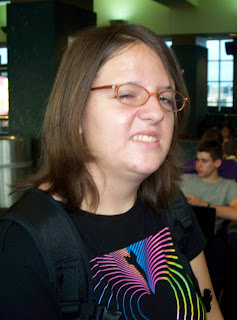 Once we were through all of the official business of getting through security that didn't give us a whole lot of time to find Jamie something to take on the plane with her to eat but we finally managed to find a tuna sandwich and bottle of Sprite for the ridiculous price of $9.00 and change. Egads! Talk about price gouging! With her food in hand, we got down to the gate just in time for Jamie to take her place in line to board the plane. As you can see, she was quite thrilled about the whole thing - not! She would have liked summer to last a little longer here in Connecticut but school registration in Florida is next Thursday and she needed to be back for that. Despite the look on her face, she was looking forward to getting back to see her cat and her friends! 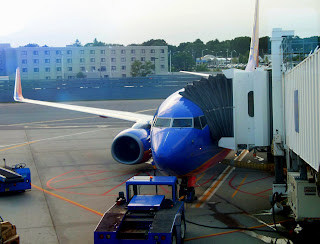 With not much time for anything other than a quick hug, kiss, and "I love you", it was her turn to walk down to the plane and find a seat for the three-hour flight to Tampa. Luckily the flight wasn't too packed and Jamie told me she was able to get a row of seats all to herself where she stretched out and took a nap for most of the flight. Now had it been me I would have been trying to take pictures of clouds rather than napping but Jamie has yet to be bitten by the blogging bug! I'm really going to have to teach her about these things at some point! 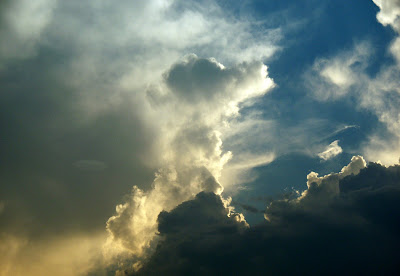 Speaking of clouds, while I was waiting for the plane to take off with another mom who had just put her child on the plane, I noticed that there were some pretty dark clouds moving in from the North. There had been weather predictions earlier for evening thunderstorms so I was hoping that Jamie's flight would be safely in the air before they moved into the area. Even though they looked rather ominous, they sure were pretty so I did what any good blogger would do - I took pictures from the airport windows! 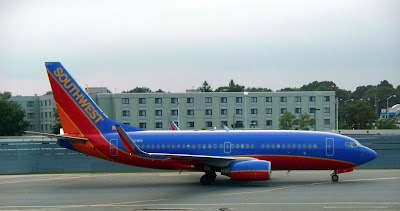 At exactly 7:45, the Southwest plane pushed back from the gate and began its taxi down the runway while I sent a mental message to the pilot to get my youngest child back to Florida safely. After I watched it disappear from sight, I began the lonely walk back down the concourse to exit the airport. By the time I got out to the parking lot, the sky had really darkened up and it was starting to spit a little. I thought that was rather appropriate as my eyes were starting to leak a little bit themselves. Sometimes I'm really not as tough as I like to think I am. 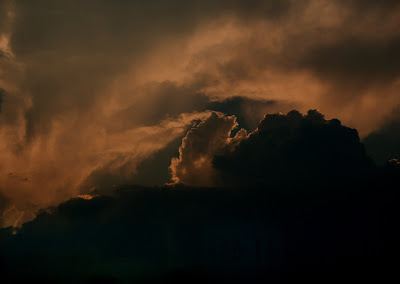 As soon as I turned onto Route 95 southbound to make the drive back to Connecticut, the skies really opened up and the rain was so heavy I could barely see the road in front of me (or was that because of the tears in my eyes?). The drive back was quiet - too, quiet - and once again I utilized the time silently cursing my ex-husband for not having had the good sense to stay in Connecticut to begin with so I didn't have to go through this on a regular basis. Either that or he could just let Jamie come live here with me and then he could be the one with the lump in his throat every time he had to put her on a plane.

Anyhow, it's back to just Amanda and I now and the house is once again way too quiet. I know that in a week or so I'll once again be used to it but in the meantime it's going to take some getting used to all over again. You would think that with the amount of practice I've had at doing this it wouldn't be so hard but some things just never get easier, do they?

On the other hand, I'm really looking forward to Amanda going down to New Jersey next week to spend a few weeks at Darci's house and having some time to myself! I truly am a paradox sometimes, aren't I?!?
Posted by Linda at 8/02/2008