Things to do while you're on vacation on the Rhode Island coast ...

1. take a ferry to Block Island
2. drive out to Cape Cod
3. sit on the deck and enjoy the view
4. drive to Wakefield and get a tattoo ...

Somewhere during the course of our week in Matunuck, someone got the idea that it would be fun to go out and get some ink at one of the local establishments so on Friday morning Mags grabbed the local Yellow Pages (we had no internet so had to do it the old-fashioned way!) and looked up what shops were available in the local area. After calling around she decided on Marco's Tattoo on Charles Street in Wakefield because a) they were taking walk-ins and b) he was friendly on the phone! I'd be happy to give the man a link but he doesn't appear to have a website - something that just boggles my mind as he's a fantastic tattoo artist. He does have a MySpace page, though, so if you're curious you can go check that out here. 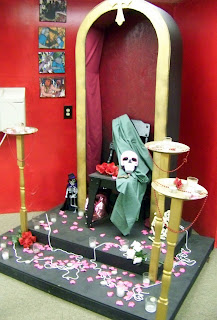 While Kai and Claire checked out our local pub and the quality of the beer therein (!), the rest of us piled in the van and made the short drive to Wakefield. As soon as we walked through the door I knew immediately that Amanda would absolutely love the place as smack in the middle of the room was an anti-zombie altar (at least I think that's what it was!). Aaron, the proprietor of the place and tattoo artist extraordinaire, is apparently more than prepared if a zombie invasion ever hits Wakefield with three years' worth of provisions put away. I guess he's the one I should have asked that of in my I've Got a Question - You've Got an Answer post of July 30th!

At any rate, he was pretty darned cool (even though he might sound a little strange to some of you, I don't think he has ever spent anytime in a drug treatment or drug rehab center!) and a totally amazing artist who has already done everything on his "Bucket List" and says he'll now just "start it over again"! Must be nice! An award-winning artist who has traveled the world, Aaron moved back to Wakefield and opened his shop there because that's where he's from and that's the place he calls home. It's also the place where several of his friends stopped by during the course of the afternoon and they were just as cool as he was. I'm telling ya - Amanda would have loved it! As a matter of fact, should I ever decide I want another tattoo to add to my collection, I'm going to have Amanda design it and then we'll travel over to Rhode Island to get it done - this guy is just that good! First, though, I'd have to figure out what I wanted and where ... 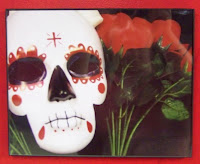 But, I digress ... there were three other people with me who actually were getting inked that day (or at least two of them were and one was thinking about renewing the ink she already had). Callie wasn't really sure what she wanted to get or where but after talking it over with Aaron he sketched out a Hawaiian flower for her that she liked and then after discussing color and location she went for it. I don't think I saw her flinch even once during the process so our Callie Ann is a pretty brave girl! It was the perfect tattoo for her, too as you'll see in the slideshow below!

Next up was Mo who had decided that he wanted to have an Eye of Horus on his calf as it's an Egyptian symbol of protection and Mo feels very connected to Egypt, as anyone who has ever read his blog knows! Even though it was a big tattoo with a lot of black ink (which is the painful stuff!), Mo handled it like a pro and the tattoo is absolutely perfect for him! 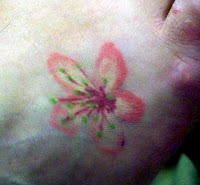 Lastly Mags asked about getting the tattoo pictured to the right that she already had on her foot touched up as the color had faded a lot since she originally had it done. As you can see, there was no black ink at all but Aaron explained to her that in order for a tattoo to work without shading, it needed to be about 50 feet big - much larger than the size of Mags' foot! He grabbed a ballpoint pen, sketched it in to show her what he meant, and immediately her tattoo looked a hundred times more vibrant. The man obviously knew his stuff! Mags agreed and after what was definitely a very painful process she emerged with a beautiful new tattoo that I'm sure she's going to love to show off.

All in all, it was a fun afternoon/evening as watching one's friends get tattooed is pretty fun - especially when you're the official photographer and not having to worry about any residual pain later on yourself! 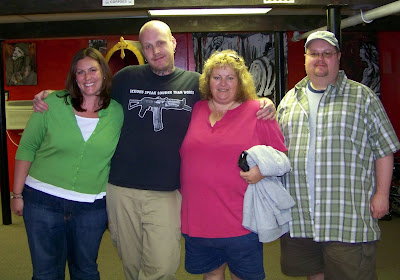 As you can see, everyone still looked pretty happy by the end of the evening! Now I know I went out of sequence of days by jumping to Friday but this one was too fun to wait to do! Enjoy the slideshow and I'll be back with more tales from the Beach Vacation Crypt later on!!