A Day at "The Block" 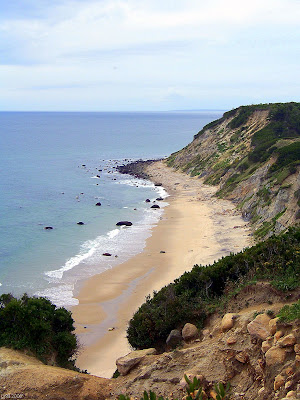 After I win the lottery I'm finally going to stop being a renter and buy a house of my own. More precisely, I'm going to have my son who took architectural drafting in tech school design a house for me and then I am going to have it custom-built on Block Island, a place I had never been to up until I took the ferry there during the course of my vacation.

Block Island is part of Rhode Island and sits about twelve miles south of the coast out in the Atlantic Ocean. Some people have compared it to Ireland because of its rolling green hills and dramatic bluffs and it's even been listed as one of the "twelve last great places in the Western Hemisphere" by the Nature Conservancy. Heck, all I know is that it's beautiful and that someday I'm going back to spend more time there even if I have to go by myself!

Living in Connecticut, I'd heard a lot about "The Block" - especially considering there are ferries that leave from New London bound for there every day in the summer - but I had never had the opportunity to go out there myself. When we were planning our beach house vacation I mentioned it as a possible destination as the ferry that leaves from Point Judith was only about 10-15 minutes from where we were staying on Matunuck Beach. Everyone else thought it was a good idea so on Tuesday we piled in the van and caught the 10:00 ferry for the 55-minute trip out to the island that we could see in the distance from the back deck of our beach house. 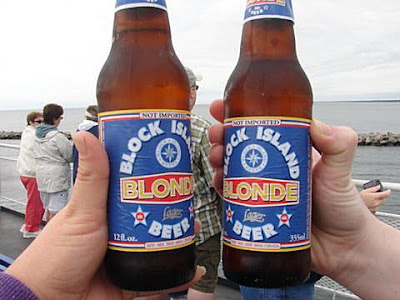 The day was a little overcast but the seas were calm as the Carol Jean set out so it was a very pleasant ride. Kai and Claire did what Canadians and the English do best when they go on holiday - toasted the occasion with a beer or two - while Callie listened to her iPod and I took probably way too many pictures! All in all it was a very nice crossing and we arrived on Block Island ready to find something to eat and then do some exploring.

My supervisor at work had suggested the Mohegan Cafe as a good lunch destination so that's where we went and I had a very tasty Burlington Burger which had a nice slice of Vermont Cheddar Cheese on it. Bad blogger that I am, I neglected to take any pictures of my lunch but I'm sure you all know what a hamburger looks like! 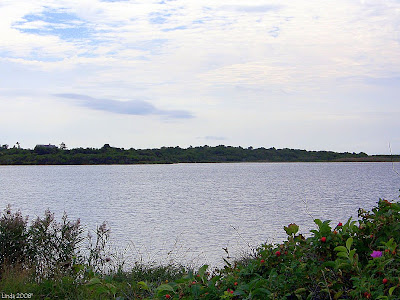 Block Island is not quite 10 square miles so there are several good options for going to see the sights - which includes two historic lighthouses and beautiful landscape. You can either rent a bicycle or a moped, be in really good shape and hike, or do what we did - hire a taxi van to take you on a one-hour narrated tour. This was a really great way to see the island as our guide was quite knowledgeable except for one small problem - the small van! Now as you can tell from the pictures we've all been posting about our vacation, none of us are exactly skinny-minny (even though Claire and Kai are by no means big) and trying to stuff the six of us into a regular size mini-van wasn't exactly easy. Mo has bad knees so he sat up front with the driver, Mags and Callie took the middle seat, and Claire, Kai, and I made like sardines and squeezed into the back. And please believe that I do mean squeezed!

This arrangement worked okay except that whenever we stopped along the way to get out like at the North Light and the Southeast Lighthouse I had to make like a contortionist to get myself in and out of the back of that van! Honestly, someone should have taken a picture of that or even better would have been a video of me trying to get in and out without messing up my back or squishing Kai even worse than I already was! We laughed about it a lot so I guess it wasn't that bad but next time I'm out there, I'm renting myself a moped and seeing the island that way! 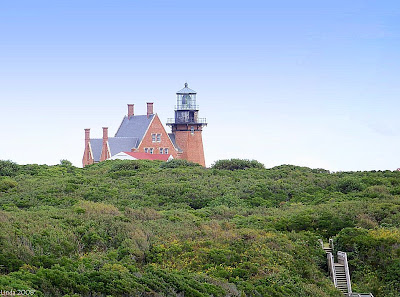 One of the highlights of our tour was a stop at Mohegan Bluffs which are on the southern side of the island facing New York. The Bluffs are the site of a battle between the invading Mohegan Indians (yes, the same ones who own the Mohegan Sun Casino down the road from me), and the native Manisee Indians of Block Island. During the battle the Mohegans were driven off the edge of the tall cliffs to their deaths on the beach some 200 feet below. The only way to get down to the beach now is to climb down a wooden staircase that has 141 steps and then climb over the large rocks that are at the foot of it. That's on the agenda for my next trip to Block Island!

At the top of Mohegan Bluffs is the Southeast Lighthouse which Mo really wanted to see as it's on his list of Most Beautiful Lighthouses. Kind of easy to see why, isn't it? The lighthouse was originally constructed in 1875 and when it was dedicated President Ulysses S. Grant attended the lighting ceremonies. Originally the lighthouse was placed 300 feet from the edge of the Bluffs but due to constant erosion it was necessary to move it back 360 feet in 1993 to keep it from tumbling over the edge. The station was built in the Victorian Gothic style, has a tower that is 67-feet tall, and it's green light can be seen for 22 miles. In 1997 it was designated a National Historic Landmark and in the summer months one can go on a tour of the house and the tower. Unfortunately we were there in the off-season and could only walk around outside of the lighthouse but even that was very, very impressive. 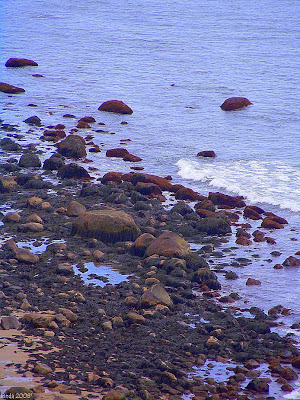 Block Island has a second lighthouse called the North Light but it is currently undergoing restoration and was closed though we were able to see it from a distance. Our tour guide said it was supposed to be reopened in mid-September but there were delays, which often happens when restoring a building that was originally built in 1884. The lighthouse that currently stands at the Northern tip of the island is the fourth lighthouse built on that site; the original one was built in 1829 but was threatened by the ocean, the second one caused more shipwrecks than it prevented, the third one was again threatened by the ocean, and finally the fourth one - made of granite and iron - became the beacon that guided mariners away from the dangers of Sandy Hook which extends about a mile or so from the island. Block Island is known for its dangerous shoals and frequent fog which caused 59 vessels to be wrecked on or near it between 1819 and 1838. Obviously two lighthouses are needed!

In addition to the lighthouses and the beautiful landscape, Block Island also has some lovely old Victorian Inns and Hotels that add to the overall charm of an island that goes from a population of about 1,000 in the winter to close to 10,000 in the summer. I could certainly do without the dramatic increase in population in the summer but otherwise I could happily see myself becoming a resident and enjoying the peace and quiet of island life. Too bad they don't need a dispatcher! 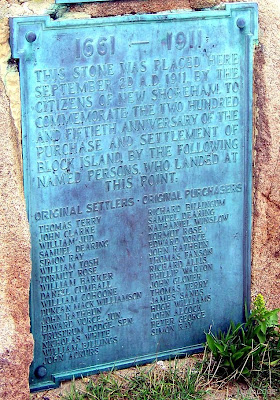 After spending the remainder of our day walking around some of the shops that were still open in spite of it being past Labor Day or checking out the rest of the local scenery, we caught the last ferry back to the mainland at 5:00 and bid Block Island a fond adieu. The trip back was just as lovely as the one going out and afforded me the opportunity to take the pictures that I used in yesterday's post. Overall I thought it was a great day and I was very glad to have gone and finally had the opportunity to see a place I had heard so much about but never had the chance to see in person.

Like I said, I'm definitely going back one of these days to hole up in a quaint Victorian inn, tour the island via moped, and revisit the two lighthouses. Not too worry, I'll be sure to take lots of pictures! And now to go buy that winning Powerball ticket so Mike can start designing my new house!