Sadly, my fervent wish that there would be no more Line of Duty deaths in September was not to be after a tragic crash of a Maryland State Police medical evacuation helicopter on Sunday, September 28th, claimed the lives of four people including two Maryland State Troopers, a Charles County emergency medical technician, and one of the two patients that were being transported from the scene of an accident in southern Maryland .

The crash occurred sometime after 12:30 a.m. in a park near Capitol Heights , Maryland when the medical helicopter encountered bad weather. A massive search for the helicopter was launched after air traffic controllers at Andrews Air Force Base lost radio contact with the crew; local, state, and federal authorities helped in the search. Using technology to track signal from the crew's cell phones, the search was narrowed down to an area near the Walker Mill Regional Park in Capital Heights . At approximately 2:00 a.m. an officer spotted the crash site deep inside the 470-acre park.

Killed in the crash was the pilot, Stephen H. Bunker, who had been with the Maryland State Police since 1972 and flown with them for more than 24 years. Pilot Bunker was a State Police corporal who had retired in 1998 and then returned to service as a civilian pilot. He held a commercial pilot's license and was a certified flight instructor and a certified instrument flight instructor. In addition he also had a single engine airplane pilot's license. Mr. Bunker is survived by his wife and three grown children. 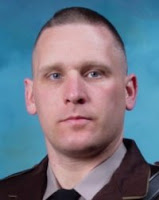 Trooper 1st Class Mickey Lippy, the flight paramedic on board, was appointed to the Maryland State Police four years ago. He had been in the Aviation Command as a flight paramedic since April of 2007. Trooper Lippy was married and had recently returned from family leave after the birth of his daughter who is 4 months old.

Maryland State Police, which flies medical helicopters in the state, say this is a devastating loss for the agency. "They save lives every day, but they also take that risk when they get into that helicopter," said Greg Shipley, public information officer for Maryland State Police. "There's always a certain amount of risk and these are brave men and women who go out and do this every day."

Colonel Terrence Sheridan, superintendent of the Maryland State Police characterized the crash as the worst in the history of the police department. "This is a devastating tragedy," he said. "We have had crashes before but never with four dead. This is the worst." The crash was the deadliest in the 47-year history of the Maryland State Police aviation unit, and the department's first in more than 22 years.

Also killed in the crash was Tanya Mallard, an emergency medical technician with the Waldorf, Maryland , Rescue Squad who leaves behind her husband and two children; and patient Ashley Younger, 17. Another patient survived the crash and was hospitalized in critical condition.
Posted by Linda at 9/29/2008