September Continues to Be Deadly for Law Enforcement Officers

September has not been a good month for law enforcement as another five officers have fallen in the line of duty since I did my last post just a few days ago. This is truly beyond sad.

On Saturday, September 6th, in Franklin County, Ohio a Deputy Sheriff died as the result of a motor vehicle accident. Deputy Sheriff Marty M. Martin, who had served with the Franklin County Sheriff's Department for ten years, was working an undercover operation at approximately 12:30 a.m. with another deputy when the unmarked SUV they were in hydroplaned as a result of heavy rain, struck a culvert, and overturned. Deputy Martin was being rushed to Grant Medical Center when he succumbed to his injuries.

The young deputy, age 35, joined the sheriff's office in 1998 where he was known for his hard work and as a top dog handler who wrote lesson plans for the Ohio Police Officers Training Academy. Earlier this year, Deputy Martin beat out more-senior deputies for a job in the Special Investigations Unit where he was paired with his partner who was also injured in the crash and remains hospitalized at this time.

Deputy Martin s survived by his 6-year old son Kyle and his wife Jody Carrico-Martin who has been battling cancer for over five years. "We always had an understanding," she said. "He was in dangerous police work, and my health wasn't too good. We took advantage of every day. But I actually didn't expect him to go first."

Another law enforcement officer died in the line of duty on Saturday, September 6th, in Martinez, California. Sergeant Paul Stazyk, a 12-year veteran of the Martinez Police Department, was shot and killed while responding to a call at a local hair salon. The salon owner's estranged husband had entered the business with a weapon looking for her and as he searched the salon he fired several shots. As responding officers arrived at the scene, they exchanged shots with the man and Sergeant Starzyk was struck in the chest.

A former banker, Sgt. Starzyk started his career in 1992 as a Reserve Officer in Martinez and became a Police Officer December 19, 1994. He joined the Pleasant Hill Police Department in May of 1996 but returned to the Martinez Police Department on April 15, 1997 and was promoted to Corporal May 21, 2006; he was again promoted on December 1, 2007 to Sergeant.

"Even people that he was arresting from time to time said, 'You know, he was the nicest cop whoever arrested me,'" said Martinez Mayor Rob Schroeder.

In his obituary his co-workers wrote, "Here is a man that got all he ever wanted. Great career, good friends, the best wife, and a great life. He left this world with no regrets. No matter where he ended up, he is sure he will see some of his co-workers there." 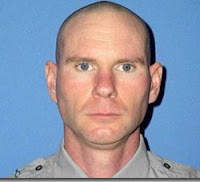 A trooper with the North Carolina Highway Patrol died on Tuesday, September 9th, from injuries sustained in a motor vehicle accident. Trooper Andrew F. Stocks, a 4-year veteran of the Highway Patrol, was responding to a report of a motor vehicle accident when his patrol car collided with a garbage truck, striking the cruiser in the driver's side door just after 1:30 p.m.
Trooper Stocks was transported to WakeMed’s Raleigh Campus where he was pronounced dead just before 5:00 p.m.

"He is, was, a fine, fine young man, and I think I lost a good friend," said Bob Emerson, who lives across the street from Stocks' parents in Cary and watched Stocks grow up. "His devotion to his duties – to his country, to the state of North Carolina, to his family – are commendable."

The 60th North Carolina state trooper to die in the line of duty since its formation in 1929, Trooper Stocks, age 43, is survived by his wife, Liane, and a stepdaughter. 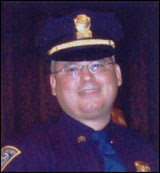 Here in Connecticut, the City of New Haven is mourning the death of Police Sergeant Dario "Scott" Aponte who was killed late Tuesday when he and another officer collided as they responded to a domestic violence call. Sgt. Aponte and veteran officer Officer Diane Gonzalez had been dispatched to a 911 call at 11:23 p.m. reporting a domestic violence incident in progress when their cruisers collided in downtown New Haven approximately 4 minutes later.

A 17-year veteran of the New Haven Police Department, Sgt. Aponte joined the department in November 1991 and was promoted to detective in April 2004. He worked in the crime scene unit until his promotion to sergeant on July 25, when he switched to the overnight patrol shift.

A native of New Haven, Sgt Aponte, age 43, served in the city where he grew up. “I’ve been through this several times. You’d think maybe it might get easier, but it doesn’t. At least for me, it seems to get tougher,” said Police Chief James Lewis Wednesday morning, his voice breaking at times. “When you spent the evening with the family in the hospital, it’s hard to describe. It’s like losing a family member.”

"He was a professional, and he paid the ultimate sacrifice," union president Sgt. Louis Cavalliere said. “He (Aponte) was responding to a call about people he did not know and risked his life, and ultimately sacrificed his life, to do his job,” Cavaliere said.

Sgt Aponte's wife, Donna, is also a New Haven police officer with whom he has two children with the youngest being born just four months ago. He also leaves behind two other children from a previous relationship. 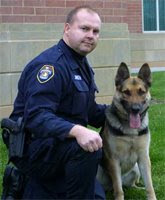 In yet another motor vehicle accident, this time in St. Charles, Missouri, Police Officer Grant Jensen, a 13-year veteran of the St. Charles Police Department, lost his life when his vehicle went off the road at the end of his shift. Officer Jansen had just gotten off work from his overnight shift and was driving home in his patrol car with his K-9 partner, Czar, who suffered minor injuries in the accident.

A passing motorist reported the cruiser off of the road at approximately 2:45 a.m. Wednesday, September 10th. Officer Jansen had been thrown out of his car and died at the scene of the accident; it was not clear whether he had been wearing his seatbelt at the time of the crash. According to police the curve where the accident occurred was not known for frequent accidents, but has been known for deer crossings. The accident remains under investigation.

“He was a fantastic officer, a hard-worker, dedicated to his work and his family,” St. Charles Police Lt. Donovan Kenton said.

Officer Jansen, age 42, is survived by his two young children and wife, who works as a dispatcher at the same department. She was not on duty at the time of the crash.
Posted by Linda at 9/11/2008