Even though last week was a lot of fun for me there were also a few moments of sadness as despite allegations that I am cruel, heartless, and a handful of other non-complimentary adjectives I really do have feelings and things happen that can make me sad. In this case it was the death of Amanda's newly adopted leopard gecko Elektra.

Just prior to our leaving the house on Saturday to head out to Rhode Island, Claire called for me to come quickly into the dining room where the lizards live as she had found Elektra lying on her back on top of her cave looking for all the world like she was dead. Despite the fact that I'm not a major fan of reptiles, I still felt terrible for the poor little thing and felt even more horrible as I called Amanda who was out with Jason, Amy, and Cate to tell her the news. Amanda was pretty quiet at first but then said that she wasn't too surprised as Elektra hadn't been eating and was horribly small for her age. Still, it hurts when you lose a pet no matter how long you've had them or what kind of pet they may be.

I wasn't really sure I wanted to pick her small little carcass up so Claire offered to remove her from the habitat for me but as soon as she touched her, Elektra moved and rolled back onto her stomach. Still, she looked like she wasn't long for the world so I called Amanda back, gave her the update, and tried not to dwell on the fact that Amanda was very likely coming back to a dead pet on Sunday.

Sure enough, I got a phone call Sunday morning letting me know that Elektra had passed on. I'm a big sap so I felt really bad for the little lizard who had never had the chance to even sell me a small insurance policy or live up to whatever potential a gecko might have. When I asked Amanda whether she wanted to consider getting another gecko or not she told me that what she'd really rather have was a ball python.
Excuse me? A what? I don't think so!

Then I remembered that earlier that week on the Today Show Matt, Meredith, Ann, and company had been talking to some expert about what a perfect pet corn snakes were and I sort of kind of suggested she look into those instead. Me and my big mouth.

Let me introduce you to So 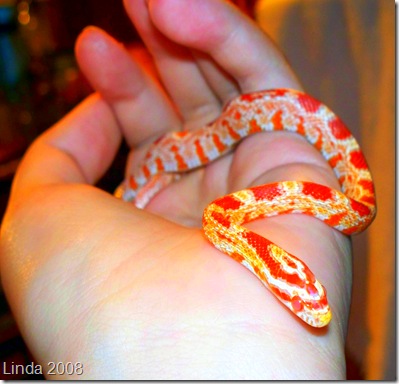 laris the corn snake - latest resident of the Mouseski household and a true baby at only 2-4 months old. She's what's called a candy-cane corn snake due to her coloring though I rather doubt she'd be mistaken for a confectionary treat even if you found her hanging off of your Christmas tree or curled up at the bottom of your stocking!

So, why are they called corn snakes? It's not because they eat corn ... no, no, no they eat very small rodents ... it's because they have a maize-like pattern on their bellies that resembles corn. At least that's what I've been told, I'm not about to turn her over and take a look for myself!

Solaris here could grow to be between 4-6 feet long, live to be 20-25 years old, and has the genetic makeup to be an excellent escape artist so Amanda needs to make sure the top of her habitat stays on very, very securely unless she wants to hear me scream like a banshee and dance across the room faster than any celebrity who has ever appeared on Dancing with the Stars!

I was kind of hoping that by the time Amy took Amanda over to the pet store last Thursday afternoon that she would have changed her mind about wanting a rodent-eating reptile that has the potential to scare her mother to death should she make like Houdini and pull off a great escape but alas, one of things that Amanda inherited from me is stubbornness and Solaris was all moved in by the time I came home from my vacation. That will teach me, won't it?!

At this point, though, I just hope Solaris doesn't succumb to some sort of snakey illness and end up having to be buried in the yard next to Elektra as I really don't like losing pets - even if they are the type that slide sidewise on their bellies and wrap themselves around fingers and sleep in trees. Ew ...

Hmm, that old saying wasn't "a snake in the hand is worth one in a tree", was it?? 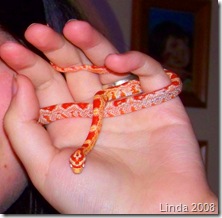 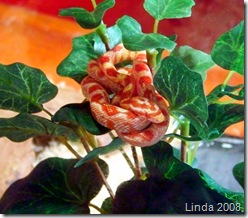 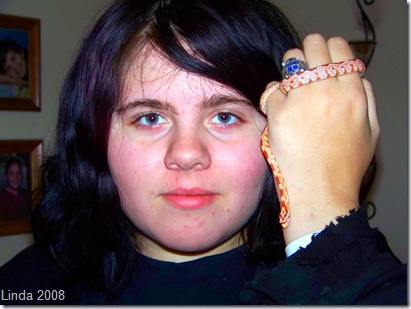 P.S., Evra and Verde still seem to be alive and well and living in the tree in their own habitat though I need to buy a new supply of crickets!
Posted by Linda at 9/24/2008