Walking Across Part of Connecticut's Past 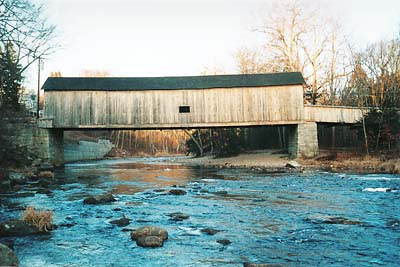 Just in case anyone is new here, or regular readers have forgotten, I'm a bit of a history fan and love exploring old places and places of a historical nature. I think I may have inherited this from my father as he always seemed to enjoy history and was quite knowledgeable on the subject. Even more so is my Uncle Alton, one of my Dad's older brothers, who can expound on just about anything historical and leave your sides aching from the humorous telling of the tales. If one's going to learn about history, it may as well be an enjoyable journey and Uncle Alton always made it so; probably also part of the reason I love history.

While en route to East Hampton yesterday to go pick up the newest member of the family (see the post below for more on that), I had the opportunity to stop by one of Connecticut's historical landmarks right off of Route 16 near the Colchester/East Hampton line - the Comstock Covered Bridge. Connecticut has only a handful of historic covered bridges with most of them being in distant parts of the state so it's a true delight to have this one so close by.

The original bridge that was built at this spot across the Salmon River was constructed in 1791 but that bridge washed away in 1873 during a spring flood. Shortly after that, the Comstock Covered Bridge was built to replace the old bridge after some bickering between local towns over location and cost. The Comstock Bridge served travelers on the main road between Colchester and Middletown for nearly sixty years before a new concrete bridge was built downstream in 1932. About five years after that, the Comstock Bridge was extensively renovated by the Civilian Conservation Corps. who introduced changes such as the present wooden gates and new siding salvaged from an old tobacco barn in Enfield. The bridge has been renovated several times since then and was placed on the National Register of Historic Places in 1976.

The Comstock Bridge is a perfect example of the Howe Truss method of bridge building that combined vertical iron rods and diagonal timbers, a method that was patented in 1840 by William Howe of Spencer, Massachusetts and used for a lot of railroad bridges. The Howe Truss method made for a very sturdy bridge and I think that's the reason that the Comstock Bridge still stands today, though it has been closed to vehicle traffic for a long time and is accessible by foot only.

Unfortunately, the current bridge looks little like it does in the picture above as time has definitely taken its toll on this part of Connecticut's history but it's still a beautiful piece of the past. As Amanda and I walked across the bridge we noted that it's supported by large steel beams and fenced off on both ends so that people who fail to respect the age of the bridge can't climb out onto it and damage either themselves or the bridge; there's still a good deal of graffiti on the walls inside the bridge but not as much as there used to be; and there are now cameras in place to keep people honest - or try to at least.


Amanda seemed to enjoy our side journey through history and I keep hoping that if I haul her off to enough places of historical interest that maybe she'll someday inherit my love of history. In the meantime, though, it's a darned good excuse to keep exploring places and taking a picture or two in the process!
Posted by Linda at 9/03/2008