Somehow or other it's Sunday again already and time for this week's edition of Comments on Comments. Did you make the post this week? Read on to find out!

I began the week by posting some pictures of the Norwich Free Academy Foliage that could be found at Amanda's high school and in my post I mentioned that I wasn't sure what the foliage was doing this year as some was at peak, some was way past, and even more of it hadn't done anything. That prompted the following comment from my nut of a friend from Scrappin' ... With Life -

It was kind of funny to me, too, but it made perfect sense!

This week's Manic Monday - Bite post was a short review of the books I had just finished reading, Eclipse and Breaking Dawn - both part of Stephenie Meyer's Twilight Series - as well as my thoughts on the benefits of becoming an immortal - were one actually able to ever do that! Vampires are quite the hot commodity these days so I'm sure I'm not the only one who's given some thought to being bitten on the neck but Travis made a very good point in his comment -

Travis said...
Well, I guess it all depends on which of the vampire legends or mythologies you follow. The trend in urban fantasy is to make it into a lifestyle.
But don't forget about the Dracula legends and the Nosferatu! Those are some skeery monsters!

Travis is right, depending on which Dracula legend you're reading he's definitely one scary bloodsucker and as for Noseferatu ... shudder! There's definitely no Edward Cullen there, that's for sure! I wonder just when it was that vampires became sexy and not scary??

On Tuesday I was Finding Fantastic Fall Foliage and a few crows in the local cemetery. Personally I find that the crows tend to creep me out a little bit but Amanda likes them as do some of my other readers including Airhead 55 who lives about a little over an hour west of me here in Connecticut and who also happens to be Prince to the charming Princess Patti!

Ralph said...
Wow! The foliage in Southeast CT is as colorful as in Southwestern CT (quite a revelation in such a small state!)
The crows on the headstones aren't that creepy. I think they are dressed in black for mourning - NOT! They add character to the somber location...

Regardless of what character they add, I still think they're creepy! It's probably those little black beady eyes of theirs that does it!

A second post on Tuesday, Protecting My Eyes and My Pocketbook, had a lot of people letting me know that it isn't just green eyes that are sensitive to sunlight and require sunglasses for protection. Even though she lives My Wonderful Life, Mighty Mom has one-upped me in the need for sunglasses -

MightyMom said...
Ha, Ms Green Eyes, try blue eyes with contacts in!! yikes! talk about GLARE!!don't leave the house without my sunglasses...but as my hooligans and especially my hooliganette LOVE to play with them...I stick to the $7 a pair rack at WalMart, thanks.

I tend to buy my sunglasses from the $5 rack at WalMart, though, and I don't have anyone playing with them! I just kind of lose them on my own ...

On Wednesday I went off to work for 16 hours but not before I was Sidetracked By a Song by one of my favorite songs from The Alan Parsons Project circa 1979. Apparently most people who read the post had never heard of the song and some of them even came up with some pretty lame excuses as to why not. For example, my friend Tisha left this one -

Oh sure, just because you were only two years old at the time doesn't mean you couldn't have heard it between now and then, Tish! Oh well, guess I'm just going to have to continue to try to teach you younger people some music appreciation!

I hadn't asked my readers a question in awhile so on Thursday in I've Got a Question, You've Got an Answer I asked readers "What scares you the most?" Some of the answers like this one from Ivana at Communiqué by Ivanhoe made me laugh -

Uhm, Ivana? You are a girl so it's okay to run like one when you see a spider! Now if you're a guy running like a girl from a spider then we need to sit down and talk!

In another comment, Mags at Ms. Maggie Moo Talks 2 You hit the nail exactly on the head as far as things that I am scared of myself -

Mags said...
What scares me most of all is not a "thing" but a possibility. It's that I'll always be alone.

Even if I don't admit it to myself very often, I really am scared of being alone for the rest of my life as I know that at some point being an independent woman is going to get old and I'm going to want someone to spend my declining years with. Boy, doesn't that sound horribly romantic?!? Well, you know what I mean - right? I don't know what scares me more, though - being alone for the rest of my life or trying to find someone to spend it with.

I traveled almost 275 miles in order to have a post to write on Friday, Taped Before a Live Studio Audience ..., which covered my solo adventure down to New York City to attend a taping of the gameshow "Who Wants to Be a Millionaire?" I want to be a millionaire but apparently I'm not smart enough to be one as I still can't pass that darned audition test (darned 30 questions in 10 minutes and they won't tell you how many you can miss to make the cut-off - $%&^!!!) What seemed to impress people the most was the fact that I drove to New York City by myself as evidenced by this comment from Star at ... All Things Work for Good ...

Star8278 said...
You rock, just for trying. I would never be able to drive into that city let alone go there for that. You're awesome!

It really wasn't that bad though; New York City is just a bit over 130 miles from here and the streets in the city make perfect sense - unlike Boston! Driving through Manhattan itself doesn't bother me, it's the traffic on Interstate 95 going home that gives me a headache from clenching my jaw as you might be able to imagine from this picture! 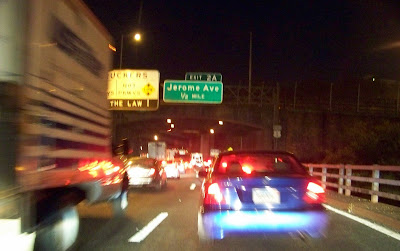 On Saturday I shared a recipe that I came across recently; in Who Wants Pie? I posted the recipe for a Struesel-Topped Apple Custard pie that I made and took into work the other day that turned out to be quite tasty; the pictures I posted didn't do it justice! I also posted a few more foliage pictures because I've got so many of them and need to stick them into posts wherever I can but that seemed to be okay with most folks, or at least a couple members of the Cat Blogosphere ...

If the kitties like it, then I figure I must be doing something right! We all know how finicky cats are, don't we?!? Thanks, guys!

And Just Because I Can ... I put up another post on Saturday for Breast Cancer Awareness Month. Matter of fact, I thought it was so cute I'm going to post it again here along with my favorite comment from my favorite British comedienne (or wanna-be comedienne anyway) ...

Claire said...
Q: Why do squirrels swim on there back?
A: to keep their nuts dry. Aw nuts! Everyone have a great Sunday and thanks again for not only reading but for commenting! As always, I appreciate them all and who knows, maybe if you leave one, you'll find yourself in next week's Comments on Comments post!
Posted by Linda at 10/26/2008