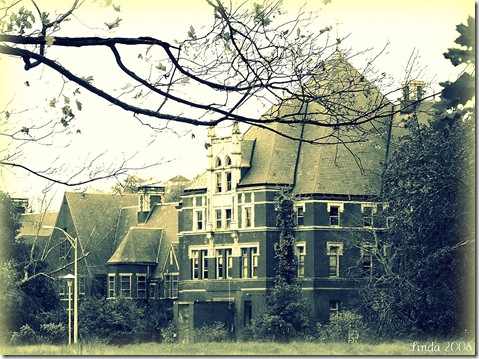 I went on vacation back in September and haven't entered Roger's Creative Photography Contest since then but thought I'd give it a go again this week with a picture that I took this past Saturday at the old Norwich State Hospital grounds (formerly the Norwich Insane Asylum). I know I've posted pictures from here before but the place is quite creepy and even more so around this time of year when the leaves are down and bare branches abound. I attempted to make this picture look closer to 1904 when the facility was first built rather than how it looks now in 2008 but I'm unsure if I succeeded or not.

I'd love to be able to explore the grounds a little more in-depth but it's posted all over the place with "State Property No Trespassing" signs and even if that wasn't enough of a deterrent to a normally law-abiding person like myself, there are security officers in little white SUVs that drive all over the place ready to pounce on anyone who steps a toe over the line. Unfortunately they are quite enthusiastic in their job performance. It's aggravating because I'm sure there are some great photo opportunities if one could just sneak onto the property get a little bit closer to the buildings. Add on the fact that there's no way on God's Green Earth that I'd go exploring over there by myself due to the major league "creep factor" and for now I'm stuck just taking pictures from the side of the road. Let me find a big, brave accomplice partner in crime person willing to break the law with me adventurer, though, and maybe someday that will change!

In the meantime, be sure to check out the other entries at the Creative Photography blog where you can see some truly creative pictures from some truly creative people! While you do that, I'll try to think of some way to thwart divert sneak past persuade the security guards so that I can get some closer pictures of the State Hospital grounds! I wonder if chocolate chip cookies are good bribe??