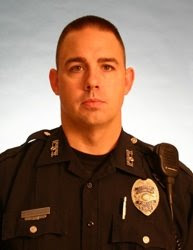 Another October line of duty death occurred shortly before midnight on Wednesday, October 22nd, when Police Officer Richard M. Bremer of the Frederick City Police Department in Maryland lost control of his cruiser and crashed during the high-speed pursuit of a driver who fled from a traffic stop.

The crash occurred after only nine blocks along a wooded area near a path where Officer Bremer was chasing the suspect who was driving a dark pick-up truck. His vehicle left the road and went down an embankment. Shortly after dispatchers had lost contact with him, back-up officers found Officer Bremer's cruiser and after extrication he was airlifted to Washington County Hospital in Hagerstown where he was pronounced dead.

Following the fatal crash, Frederick police and Frederick County Sheriff's Office deputies searched numerous locations in search of the suspect vehicle which was found on the west side of Fredericksburg with the driver located in a nearby motel. The driver has been arrested and faces 16 charges including a charge of fleeing and eluding a police officer resulting in the officer’s death. That offense carries a maximum penalty of 10 years in prison and a $5,000 fine.

"Obviously we're heartbroken. This is a member of our family we've lost, so it's tough," said Lt. Clark Pennington.

A five-year veteran of the FPD, Officer Bremer, 39, was assigned to the Frederick Police Department's patrol division where, according to his father, he "enjoyed his duties as an officer so much, he would have worked for free."

Police Chief Kim Dine said Officer Bremer, a native of Penn Hills, Pennsylvania, was a hardworking officer who loved his work and had made more than 270 arrests since 2005. “He loved being out on the street, and that’s what he died doing. It's a huge loss to the citizens of Frederick and the Frederick Police Department," Dine said.

Officer Bremer leaves behind his wife and three children as well as an entire Department that will mourn his loss and honor him Friday at the Frederick Police Department’s 150-year anniversary gala. “Obviously, this tragedy is part of our 150 years,” Chief Dine said. “Clearly this will be about him and all the men and women of this department.”
Posted by Linda at 10/24/2008