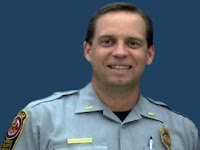 Lt. Stecco had entered the waters of Pohick Bay wearing only a dry suit to role-play a victim but failed to resurface. An intense round-the-clock search was immediately launched but Lt. Stecco's body wasn't recovered until approximately 12:25 p.m. on Saturday, October 25th. According to police, the murky waters and make-up of the bottom of the bay made the search particularly difficult. Divers likened the search to dropping a quarter on a football field and attempting to find it by hand.

A veteran of the United States Marine Corps and 19-year veteran of the department, Lt. Stecco spent 11 of those 19 years assigned to the Mount Vernon District station where Chief Rohrer said Lt. Stecco was a highly decorated member of the department; he was awarded a Silver Medal of Valor in 1994, a Bronze Medal of Valor in 1997, and a Certificate of Valor by the Fairfax County Chamber of Commerce in 2000 for acts of bravery above and beyond the call of duty.

Fueled by his passion and dedication for serving the children and teenagers of the county just one month ago before his untimely death, Lt. Stecco opted to leave the Mount Vernon district and join the Fairfax County Police Department's Youth Services Division

Lt. Stecco, 42, leaves behind his wife, their three children, and his mother.

A 25-year old Phoenix , Arizona police officer was killed early Saturday morning when his cruiser was struck by a vehicle that turned in front of him while he was responding to a "shots fired" call.

Officer Shane Figueroa was responding to a call west of downtown Phoenix at approximately 1:22 a.m. on October 25th when witnesses state that a small white pickup truck with two occupants turned left in front of his cruiser. The impact spun Figueroa's vehicle and sent it crashing into a block wall. He was pronounced dead at St. Joseph 's Hospital and Medical Center .

The vehicle was driven by an illegal immigrant who was also wanted on four separate warrants. "He told officers at the scene that he was in this country illegally. He was also suspected of being under the influence of alcohol," says Phoenix Police Sgt. Andy Hill. "He does have, in addition, four warrants for his arrest under another name, which he admitted were his."

"This is a tremendous loss, not only to Officer Figueroa's family, but to the Phoenix Police Department and the community," said Sgt. Hill.

"This is a tragedy, not just for us," Phoenix Police Chief Jack Harris said. "We will do everything we possibly can to assist his family." Harris said four Phoenix police officers have died this month, either from illness or in the line of duty.