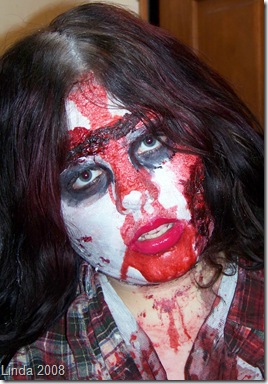 Some of you might remember that back towards the end of July I did an I've Got a Question - You've Got an Answer post wherein I asked "Are you prepared for a zombie outbreak or are you just going to wing it?" I'd been having trouble coming up with something creative for my post that evening and Amanda suggested the question. The question generated some great answers but I personally never gave much thought to the actual concept of a zombie outbreak and figured I probably wouldn't survive one were an outbreak to actually occur. 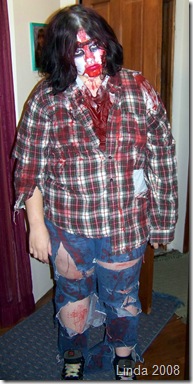 could think of - grabbed my camera and took some pictures! Luckily, the zombie seemed to like posing for pictures and it was appeased from attacking me. As a matter of fact, it was so happy that it allowed me to go back to bed while it went to school ...

It's been said to me that when Amanda does something, she's not half-assed about it and apparently that includes turning herself into a zombie which is exactly what she did this morning in celebration of Halloween. She said that they were allowed to dress up for Halloween at school today but weren't allowed to wear masks of any sort so even though she had originally wanted to go as a Plague Doctor and wear the mask that she had made for that costume, she had to fall back, regroup, and go in another direction.

This was the direction she took ... 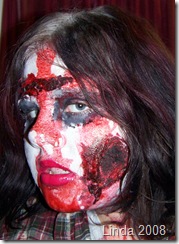 I haven't gotten any phone calls from Norwich Free Academy telling me to come pick up my zombie and take her home so I guess she hasn't attacked anyone else (no sense in acting the part while looking it, is there?) and wasn't pulling my leg when she told me that they were allowed to wear costumes.

Ah to be young again and have some fun with Halloween rather than having to be worrying that it might be crazy busy at work tonight!

Speaking of fun - I had Amanda strike a couple of "Thriller" poses while I was taking pictures this morning. She was kind enough to cooperate ... 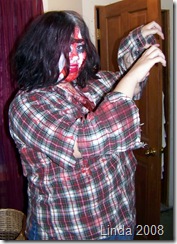 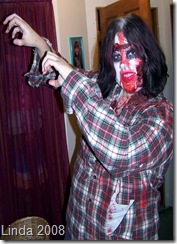 Here's hoping your Halloween is a real thriller, too - in a good way, of course!