Our Vacation Takes Us to Cape Cod

Are you folks sick of hearing about my vacation yet? Yes? Too bad! No? Good because I've got one last slideshow for you and then I'm almost done boring you with tales of Rhode Island and the beach house! Actually, now that I think about it, this post has little to do with Rhode Island or the beach house because this post is about the road trip we took to Provincetown on the very tip of Cape Cod.

Even though I'm a New Englander, prior to this trip I had only been out to Cape Cod once when my cousin Becky and I took our four girls out to stay near Hyannis for a few days a long, long time ago back when I was still married. While we were there we took the girls up to the National Seashore near Marconi Beach and they just loved it as did I. What a beautiful place! I'd always wanted to go back again but the opportunity had never presented itself until this last vacation. 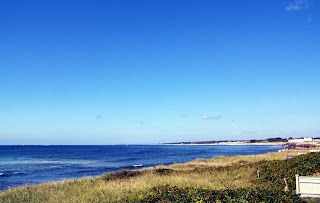 We had chosen Thursday as our day to make the 3-1/2 hour trip and the day dawned bright and sunny while I dawned stiff, achy, and barely able to get out of bed! I had noticed the day before that I was starting to have some trouble getting around but hadn't put two and two together and come up with a horrible mattress until that morning when I felt about 90 rather than the young 50 that I am!

As I creaked my way upstairs to get a cup of coffee I was starting to despair that I was going to be able to make the trip out to the Cape but I really, really wanted to go so doubled up the Advil and Aleve and hoped for the best. Had I not been able to make the trip the only good thing about it would have been that I could have spent some extra time with Kai as she was under the weather herself and opted to stay at the beach house. Still, I had studied up on the history of Provincetown (did you know that it was the first landing place for the Pilgrims prior to packing the Mayflower back up and calling Plymouth Plantation home?) and I really wanted to see it so I climbed into the 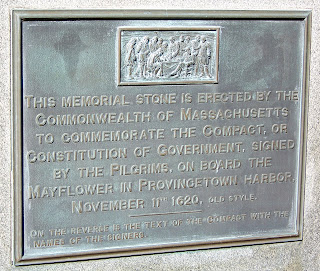 back of the van with Claire and a pillow and off we went - like a herd of turtles as Callie likes to say!

The drive to the Cape was very nice as I got to finally travel over the Jamestown Bridge and catch a glimpse of Newport; another place I've yet to get to but would really like to see up close one of these days. Traveling out of Rhode Island and into Fall River, Massachusetts, though, we got a little turned around and ended up in East Providence rather than where we were supposed to be. As Mags worked on getting us pointed in the right direction, my back teeth were starting to float so she pulled in at a small bakery for directions and a much-needed restroom break.

After extricating myself from the back of the van, Callie and I went in only to find that they didn't have a public restroom but the nice guy in the front said we could use the employee one in the back. Of course, he didn't tell the people in the back that so as we made our way through the back bakery in search of the restroom we got questioned by a lot of people with Rhode Island accents about what we were doing! If you've never heard a Rhode Island accent before, especially an East Providence one, think mafia and you'll be pretty darned close! Needless to say, after the kindness of letting us use their non-public restroom I thought the least I could do was buy something so I picked out a nice loaf of sweet bread that was very, very tasty.

Back on the road again, we were now pointed in the right direction and before I knew it we were driving back through Fall River, Massachusetts (home of the infamous Lizzie Borden) and heading towards New Bedford which used to be a major whaling town way back in the day. From there it was a hop, skip, and a jump out to the Cape but as we traveled east, the skies overhead began to darken and cloud up as our beautiful weather seemed to be heading back towards Providence! Ut-oh ...

Once we got onto Route 6, the main road that runs the entire length of the Cape, things were pretty uneventful and we all found ourselves drifting off to sleep - with the exception of Mags who was driving - until we got closer to Wellfleet and Truro where the skies cleared up and the sun came back out like it had never gone away. To say that it was windy, though, would be a major understatement! 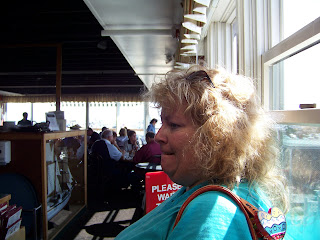 Upon our arrival in Provincetown everyone was pretty well famished as it was after 1:00 and we'd been on the road since a bit before 9:00 so our first stop was The Lobster Pot, the place to eat according to everything I'd read on-line. Apparently everyone else had read the same thing as the joint was packed and mostly by Senior Citizens who seemed to have come to Provincetown by the busload! I was kind of surprised as I hadn't really thought of P'Town as being the type of place that senior bus tours would go to but what the hey ... it really was pretty and there was a lot of history there even though Provincetown's main claim to fame is that it is a mecca for the gay community on the East Coast. As a matter of fact, I knew that about it before I knew that the Pilgrims had landed there five weeks prior to setting foot on Plymouth Rock!

Funny story here ... Callie, who is a complete and total sweetheart, had no clue that P'Town was a predominantly gay town even though there were same sex couples walking by hand-in-hand on a fairly regular basis and there were rainbow flags flying everywhere and signs and magnets galore! Upon finding that out she said she felt like she fit right in with her tote bag with its rainbow handles that she had bought in Palm Springs - another predominantly gay community! True story! 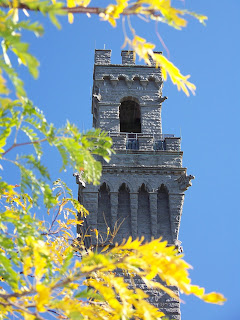 After lunch we walked around and looked in a few shops here and there before Callie and Mags retired to a bench in front of town hall, Mo went to check out a few more shops and perhaps some of the local scenery (wink, wink!), and Claire and I walked up the hill to the Pilgrim Monument. I had read about the 252-foot granite tower that President Theodore Roosevelt had laid the cornerstone for in 1907 and President Taft dedicated on August 5th, 1910 and really wanted to climb to the top but my back was still giving me some grief and I didn't think I was up to the 116 stairs and 60 ramps that would get us to the top. I was pretty disappointed that I couldn't make the climb as it was a gorgeous day and I was sure the view would have been spectacular but common sense prevailed and we didn't attempt it.

Instead Claire and I walked around the small park at the base of the monument that commemorates the Pilgrims’ first landing in the New World at Provincetown in November 1620 and the signing of the Mayflower Compact, which established the rule of law for the new land. Liking historic things I thought it was pretty darned cool to be walking where the Pilgrims once walked though I also thought someone needed to take some time to clean the monuments up a little! Darned seagulls! 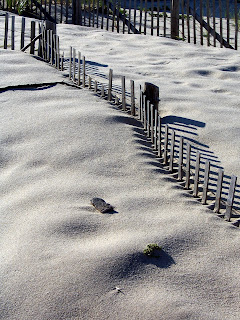 It was around 4:30 when we finally decided we had seen all we wanted to see in Provincetown (I mean, seriously, how many t-shirt shops can you look in?) and started back down Route 6 for our journey home. Idiot that I am I had almost forgotten that one of the things that Callie and Claire really wanted to see was the National Seashore (too much Advil maybe?) so we got Mags to stop near North Truro and we all piled out of the van and trudged over the sand dunes to get a glimpse of the Atlantic Ocean. It was kind of cold and way too windy but it was beautiful nonetheless. As I stood on the very edge of the United States looking out across the vast ocean I was reminded of how very small I am in the big picture of things; a feeling that really does put things in perspective.

The drive back to the beach house was uneventful until we got took the wrong turn in darned Fall River and once again found ourselves in East Providence! This time Mags continued on towards Providence which was okay because I knew we could get to where we needed to be just by following Interstate 95 southbound and it gave Callie, Claire, and Mo a chance to catch a glimpse of Providence. Turns out they got a glimpse of it three times as, Rhode Island being Rhode Island, Mags got lost a couple of times! I don't know how it is that the smallest State in the Union can be so confusing but it is! 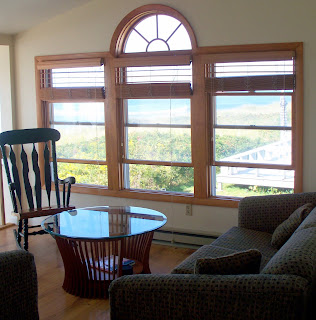 After stopping for a very late dinner in Wakefield we finally got back to the beach house after 10:00 but we weren't tired enough to go to bed yet and stayed up late watching TV and laughing and having a good time just enjoying each other's company which was what our vacation was really all about - good times with good people who have become good friends. Who says blogging isn't real?

Oh, and for the record, I refused to sleep on the mattress from hell anymore and spent the last two nights at the house sleeping very comfortably on the couch in the upstairs living room that had a fantastic view of the water!