Protecting My Eyes and My Pocketbook! 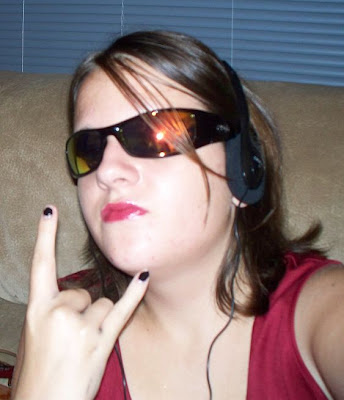 As someone who has green eyes, I have learned -sometimes the hard way - that it's not a good idea to go out into bright sunlight without a pair of sunglasses on. Without them I can barely keep my eyes open - never mind actually see!

A lot of people wear sunglasses because they think it makes them look cool - like my wanna be rocker of a youngest daughter over there! - but for me, it's most definitely a necessity rather than a fashion statement. However, just because I need to wear sunglasses for health and safety reasons that doesn't mean that I don't want a nice looking pair rather than something that's just functional!

The sad thing is, I don't exactly have the kind of budget that allows me to go out and buy designer women's sunglasses no matter how much I think they might make me look like a woman of sophisticated mystery while keeping me from squinting like Mr. Magoo! However, just because I'm relatively broke doesn't mean that I can't get a nice pair of Ray Bans or Body Glove sunglasses at a great website like Sunglasses Online. Not only do they have a great selection to choose from, they've got some great prices that even a single working mom like myself could afford.

From performance sunglasses to womens and mens sunglasses to unisex glasses to more there's a great selection and there's even a terrific clearance section - and let me tell you - I am all about a clearance section because nothing makes me happier than finding what I want at an even better price than I was hoping for. I think it was my mom that taught me that one!

At Sunglasses Online I can save my eyes while I'm saving money and who could ask for more than that? Certainly not me!
Posted by Linda at 10/21/2008

Email ThisBlogThis!Share to TwitterShare to FacebookShare to Pinterest
Labels: glasses