September was definitely one of the worst months of the year for fallen officers and even though I had hoped for otherwise, it didn't end before I received another email notifying me of two more line of duty deaths. Please join me in sending warm thoughts to the families of these two men who died protecting their communities. 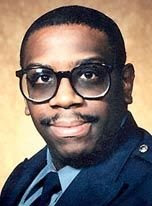 Sergeant Robert Craig Douglas, a 19-year veteran of the Oklahoma City Police Department died on Sunday, September 28th, 2008 after he succumbed to injuries that he received in a motorcycle accident while on duty July 26th, 2003 when he was struck by a vehicle while riding his police motorcycle, police said. Sergeant Douglas was knocked from the motorcycle into the path of another vehicle which ran over him and had been in a coma ever since.

Sergeant Douglas graduated from the police academy and joined the police force in the spring of 1986. He was promoted to the rank of Sergeant in March of 1993. In November 1998, he transferred to the Solo Motorcycle Unit where he remained until the time of the accident.

During his career, he was commended for his role in working a security detail for President Ronald Reagan in 1986 and again in 1995 for his work after the bombing of the Alfred P. Murrah Federal Building in downtown Oklahoma City.

Sergeant Douglas is survived by his wife Alycia; and their 6-year old son Bobby, along with his father and numerous friends at the Oklahoma City Police Department. 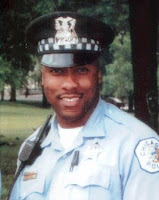 Chicago Police Officer Nathaniel Taylor Jr., known by his friends as "Nate," was killed by a convicted felon as officers attempted to execute a search warrant at the home of a Southeast Side drug suspect early Sunday, September 28th. Several officers were conducting surveillance and waiting to serve a warrant at a home when the suspect pulled up in a car, according to police. Several sources said the officers announced they were police, and the suspect opened fire striking Officer Taylor several times. Police fired back, striking the suspect who was a felon with an attempted murder conviction. Taylor, age 39, died about 6 p.m. Sunday at the hospital. He becomes the third Chicago officer to be killed since July.

Officer Taylor was assigned to investigate gang intelligence and was detailed to narcotics. "Their [narcotics officers’] work is very dangerous," said Monique Bond, a police spokeswoman. "You just don't know what to expect or what you're walking into."

Police sources said Taylor, a 14-year veteran of the Chicago Police Department, was a very “well liked, stand-up guy,” who went out of his way to give advice and self-defense tips to fellow officers. He is survived by his wife and daughter.
Posted by Linda at 10/02/2008