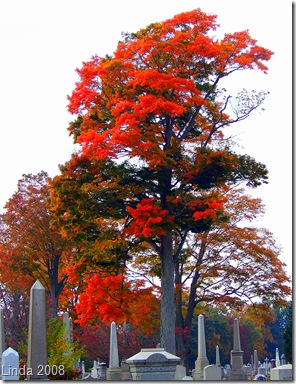 Sometimes you find the most fantastic foliage in somewhat unlikely places ... like in the middle of your local cemetery!

I've known for several years now that some of the prettiest colors can be found on the trees at the Yantic Cemetery here in Norwich and this year has been no exception as you can see from some of the pictures that I took there the other day when Amanda and I stopped by after I picked her up from school following her banner-painting session with the Gia Club.

I had a feeling that even if I couldn't find some eye-popping elsewhere in the local area that I would be able to dig some up at one of my favorite haunts. Sorry, little bit of cemetery humor there - yeah, yeah, very little - sorry! 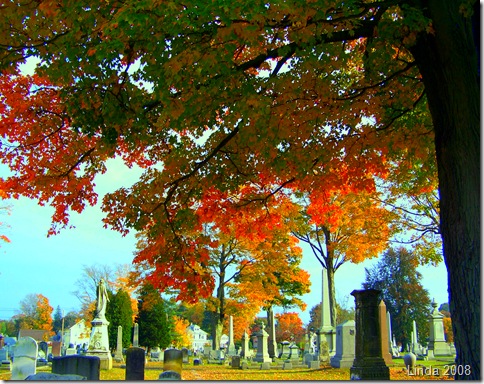 In addition to there being very colorful trees, these are also some very large 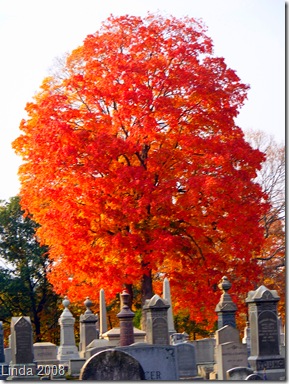 trees located in the Yantic Cemetery but chances are that's because they go back to at least 1844 when the cemetery was first established - if not a lot further. They really are beautiful and it's one of the reasons that I really like this cemetery even though it isn't the oldest in town.

As I've said in the past, reading the names on a lot of the stones is like reading a "Who's Who" list of people from Norwich and because a lot of the stones are from the Victorian Era they have a lot of character. Gravestones had become more of an art-form by the time this cemetery was established and some of the stones and markers are truly beautiful in their craftsmanship. 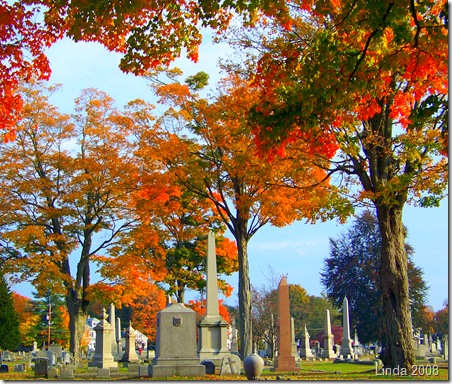 Along with the gorgeous foliage that we got to see while driving through the cemetery we also came across a few feathered visitors that Amanda insisted I take some pictures of and share here as she thought that they were pretty whereas I just find crows to be downright creepy. 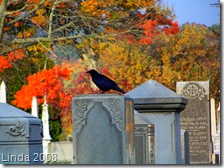 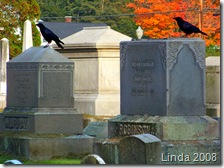 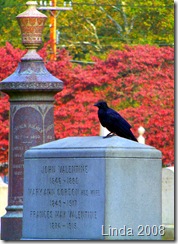 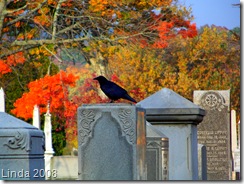 Ah well, as they say - "beauty is in the eye of the beholder" and I guess I'm just not surprised that Amanda thinks that crows are beautiful birds. The kid does seem to have rather macabre taste at times I'm afraid! Then again, she does spend a lot of time exploring cemeteries with her mom so I guess it goes to figure!

I'll be at my second job at the Tribe for awhile today but when I get done at noon I'm hoping to get some foliage pictures down near Fort Shantok which is the place where the Mohegan tribe first settled with Sachem Uncas in the 17th Century and very close to here. I'll let you know how that goes!
Posted by Linda at 10/21/2008