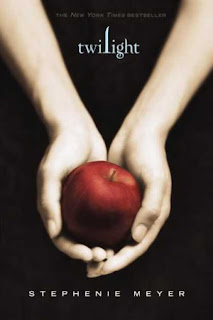 Due to a shift swap with one of my co-workers I only had to work until 3:00 p.m. yesterday so it was my intent to go out and take some pictures of the leaves that are just starting to turn so that I could participate in this week's Manic Monday Meme theme of "Leaf". However, the weather didn't want to cooperate and clear up like the forecasters said it would so instead I came home from work and curled up in bed with the book that Amanda's friend Cate had given me to read - Twilight by Stephenie Meyer.

If you're a teenage girl - or know one - you've probably heard of this book which is the first of the four books in the Twilight Saga, currently some of the most popular books written for young adults with sales exceeding 50 million copies worldwide since Twilight debuted in 2004 and over 7.7 million copies sold in the U.S. alone. Twilight is being released as a major motion picture on November 21st and both Amanda and Cate have promised to drag me off to the movie when it comes out. 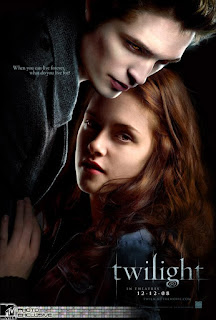 Beyond knowing that the book is about a teenage girl who falls in love with a teenage vampire and that Robert Pattinson, who is best known for his portrayal of Cedric Diggory in the fourth installment of the Harry Potter movie series, plays the role of Edward Cullen (rrowr!) in the movie, I didn't know much about it at all. Well, unless you count the fact that Amanda, Cate, and Darci all loved the books and can't wait for the movie to come out.

I've been trying to get back into doing more reading so I figured what the heck, I'd read the book before the movie came out to find out what all the fuss was about. Cate gave me the book Saturday afternoon around 3:00 and I had it finished by Sunday evening - the fastest I've read a book in a long time! Now I'm anxiously awaiting Darci's arrival on Wednesday with book #2, New Moon, as I can't get it at the library due to the long waiting list and it's the one book in the series that Cate doesn't have. Dang! Darci, however, does have it and is bringing it with her on the train when she comes up to visit Amanda this weekend.

Even though Twilight is targeted towards teenagers/young adults and the writing isn't as sophisticated as some other books I've read, I really enjoyed the story in spite of the fact that I was none too enchanted with the book's female lead character - Bella. There's just something about her that gets on my nerves and makes me want to reach through the pages and strangle her but Amanda assures me that's a common feeling amongst readers! She warned me that Bella will get on my nerves even more in the second book but I'm willing to risk it as I'd like to see where this saga is going and whether or not Bella can ever talk Edward into turning into a vampire so that she can be with him forever. None of the girls have spoiled it for me and have promised that they won't!

As for the movie, I'm going to guess that like all books turned into movies it isn't exactly going to follow the story as well as it should and there will be lots of embellishing along the way but what I've seen of the trailer has intrigued me so far and I'm looking forward to taking the girls to go see it - or are the girls taking me? Either way, I admit to loving a good romance story and if the movie by any chance has a good soundtrack - all the better! The only thing I know about that so far is that the band Paramore has two songs on it and there's another by Muse, a band whose song "Knights of Cydonia" kills my hand on Guitar Hero III but who is a favorite of the author.

I don't know, maybe it's because I've been out of the dating scene for a very long time now but would someone please tell me that I'm not the only 50-year old who thinks that vampires are sexy! And where's Darci with that second book?!?