After much hemming and hawing and calculating and recalculating and convincing myself that it would be a good investment, I finally made the plunge and bought myself a new camera. Now I just need to put in even more extra hours to finish paying for it as the only way I could afford a new camera at this time was to succumb to the lure of Easy-Pay on QVC but I figured if I was going to be practically tied to a dispatch console anyway, I should reap some of the benefits. 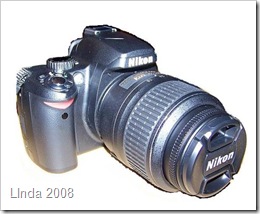 This is my new baby, a Nikon D-60 with an 18-55 mm lens. It's a major step up from my Kodak Z712 which is a simple point and shoot camera that takes most excellent pictures with basically just the touch of a button. This camera has a lot more buttons to touch and even though I've read through the owner's manual, I have a sneaky feeling this is going to be a learning process for quite some time to come but one that I'm hoping will be well worth it.

Unfortunately, since I've taken ownership and become a Nikonian, the weather has been absolute crap so I haven't had the chance to go out and take too many pictures (well, that and I've been at work an awful lot, too). I did get the chance to take some pictures after visiting the library in downtown Norwich this past Saturday even though the skies were pretty gray - at least the rain was willing to hold off for a little while so I could try out my new camera a bit.

Downtown Norwich, even though it's nothing to brag about at this point in time, has some very interesting old buildings and those were the object of my photographic hunt. I just wish there had been a little sun to light them up a bit but last week the sun was definitely someplace else!

The pictures in this post are of the building that houses the Chelsea Savings Bank which was established in 1858 and sits solidly at the corners of Main and Cliff Street at One Franklin Square. 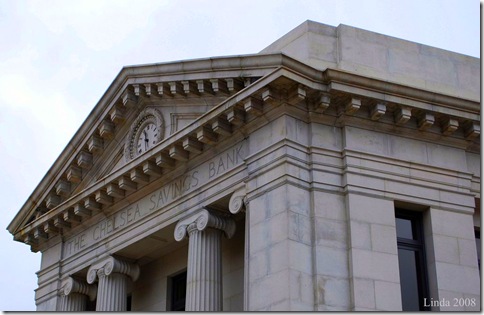 I just love this building as it looks exactly as a bank should look - solid and strong and a safe place to put one's money. It reminds me a bit of the bank that George worked at in Mary Poppins. You almost expect to see stern men in dark suits inside hunched over ledgers as they perform the day's accounting! 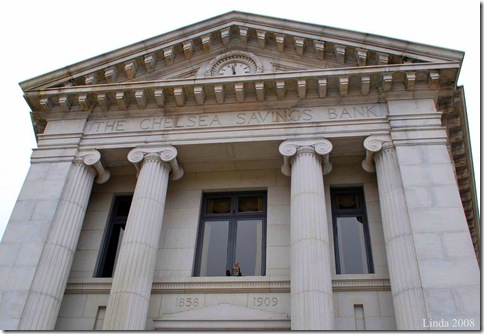 This particular building was constructed following the 1909 fire that destroyed the original Chelsea Savings Bank building that was located in Bankers Row on Shetucket Street. It last underwent renovation and expansion in 1980. 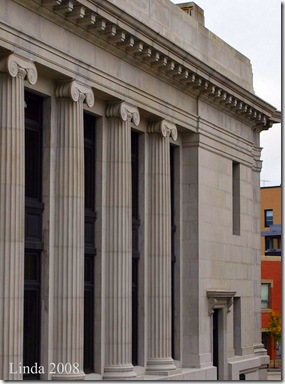 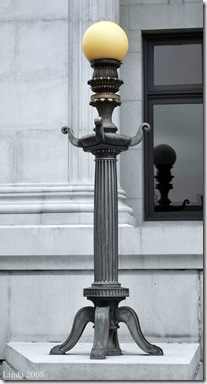 As I said to Rick Kramer, Director of Rose City Renaissance, a few weeks back when he and I met to discuss a possible upcoming photography contest and project (I'll write more on that another day), Norwich used to be a big deal and it's buildings like this that prove that statement out.

Unfortunately, not all of the buildings in Norwich's downtown area have the architecture and stateliness of this particular building but a lot of them have character of their own and I plan on bringing you pictures of them in future posts - once I figure out how to use my new-fangled camera that is and have the time to do a little more exploring with maybe some slightly better lighting to boot!