A Birth Meme Followed By A Birthday!

Last week, Jamie of Duward Discussion did a post about her birth year which she was inspired to write based on a feature called "Old School Friday" that Wayne Hicks does each week at Electronic Village. Jamie invented her own meme from this and challenged us all to the following:

"Your mission should you choose to accept it, is to go to The Birthday Calculator and This Day In History to find all sorts of interesting stuff about you and tell the world all about it."

Well, who am I to back away from a challenge? Especially one made by a woman whom I greatly admire as a fellow history buff and one who is much more knowledgeable than I! To that end, I hied myself on over to The Birthday Calculator and came up with the following for September 9th, 1958, the day my mother gave birth to her only daughter:

I was born on a Tuesday under the astrological sign Virgo.

My fortune cookie reads: It takes more than good memory to have good memories.

I was born in the Chinese year of the Dog.

My Native American Zodiac sign is Bear; my plant is Violets.

I share my birthday with Michael Keaton, Adam Sandler, and Hugh Grant so guess who I'm inviting over for a party next year?!?

There were some truly odd songs at the Top of the Chart in 1958 including The Purple People Eater by Sheb Wooley, Tequila by Champs, Volare by Domenico Modugno, and one of my very favorites as a kid ...

My lucky day is Wednesday and lucky me, I work 16-hour days on Wednesdays!

My lucky number is 5, which is even better if the 5th happens to be a Wednesday!

My ruling planet is Mercury.

My birthstone is a Sapphire and my birth tree is a Weeping Willow (why am I not surprised by this part ... "suffers in love but sometimes finds an anchoring partner."?!?)

In 1776 - the Continental Congress renames the "United Colonies," "United States"

In 1893 - Frances Folsom Cleveland, the wife of President Grover Cleveland, gives birth to a daughter, Esther, in the White House.

In 1956 - Elvis Presley sings "Don't Be Cruel" and "Hound Dog" on Ed Sullivan's immensely popular show Toast of the Town.

In 1965 - Los Angeles Dodgers pitcher Sandy Koufax pitches the eighth perfect game in major league history, leading the Dodgers to a 1-0 win over the Chicago Cubs at Dodgers Stadium in Los Angeles.

In 1966 - John Lennon meets Yoko Ono at an avante-garde art exposition. And imagine that - he releases "Imagine" in 1971 five years later to the day!

In 1971 - Prisoners riot and seize control of the maximum-security Attica Correctional Facility near Buffalo, New York.

In 1976 - Mao Zedong, Chinese revolutionary and statesman, dies in Beijing at the age of 82.
Thanks, Jamie - that was actually kind of fun! Perhaps more of you would like to find out about your birthday and what exciting things happened in history then? If so, take up Jamie's challenge and then be sure to let me know so I can read about it and let Jamie know, too, as she'll be more than happy to link back to you!

Oh, and speaking of great days in history ... guess what happened on this date thirty-one years ago in 1977? Not only did Egyptian president Anwar el-Sadat travel to Jerusalem to seek a permanent peace settlement with Israel after decades of conflict but it was also the birthday of the Blogosphere's very own CrAzY Working Mom! Talk about monumental!

Be sure to pop by Tisha's blog and wish her a very happy birthday as she celebrates the beginning of her 31st year on this planet! Oh - and here - have some cake before you go because what's a birthday without cake?? 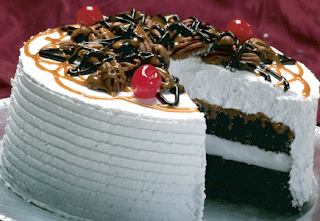