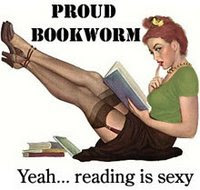 Emmie from Emmas Dilemmas & Great Expectations bestowed this award on my English friend, Akelamalu who, in turn, was kind enough to bestow it on me. Whereas I think this is a really cool award and I'm honored to have received it, I've got to say that looks like one extremely uncomfortable position to read a book in! Woman - get a comfy chair and put on a pair of sweats for crying out loud!

Rules: Pass it on to five other bloggers, and tell them to open the nearest book to page 46. Write out the fifth sentence on that page, and also the next two to five sentences. The closest book, not the coolest, or the one you think will sound the best. THE CLOSEST

Truth be told, I have two books sitting right next to me on the couch but in deference to keeping to the rule of opening the closest book I will grab the one on top which just happens to be Dark Lover by J.R. Ward. Now, let's see what page 46 has to offer, shall we?

"Calling the meeting in the daylight was also important, as it would ensure they weren't ambushed by the brotherhood. And he could easily pass it off to the academy's human employees as a seminar on martial-arts technique. They would hold the gathering in the large training room in the basement and lock the doors so they wouldn't be intruded upon.

Before he signed off, he posted an account of his elimination of Darius, because he wanted the slayers to have it in writing. He detailed the kind of bomb he'd used, the way to manufacture one from scratch, and the method for hardwiring the detonator into a car's ignition system."

At this point, you've probably read as much of the book as I have as I'm currently reading the book that was sitting under this one - The Eight by Katherine Neville which was recommended to me by our own Lois. Speaking of our own Lois, I'll be passing this award on to her along with four other bloggers who are very likely to have a book sitting close at hand - oh, and if you're a guy - don't be offended by this award, I bet you all look real cute in a jacked-up skirt and garters, too!

In addition to Lois of Lowdown from Lois I'm going to pass this award on to Rob of In Times & Out Goals as I'm sure he's got several books sitting close by; Morgen of It's a Blog Eat Blog World because even though I know he doesn't like tags, I'm having such a good time picturing him in that outfit that I couldn't resist!; Jamie of Duward Discussion as I'm sure she's got something really good close at hand; and Erik of The Fire Insider for pretty much the same reason I'm passing this on to Mo!