Civil War History in My Own "Backyard"

As some of you know, I enjoy history and in particular, the history of the Civil War. I've done a few posts here and there about various Civil War subjects and I've also done posts about the place I live - Norwich, Connecticut. Today, as we draw closer to Veteran's Day next week, I thought I would combine the two and do a post about the Buckingham Memorial also known as Segdwick Post #1 of the G.A.R. 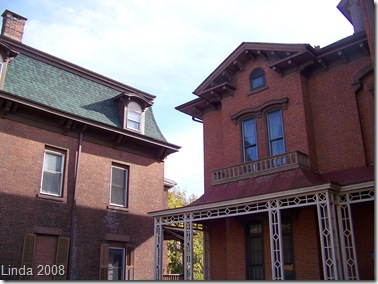 The G.A.R., or Grand Army of the Republic, was a fraternal organization established in 1866 that was comprised of veterans of the Union Army who served in the Civil War. They not only wielded great political clout (no Republican was nominated to the Presidency between 1868 and 1908 without first receiving an endorsement from the G.A.R.) but they were also very active in pension legislation, establishing retirement homes for soldiers, and many other areas which concerned Union veterans including the establishment of Civil War monuments dedicated to those brave men who served honorably in our country's most horrific war in which brother fought against brother. 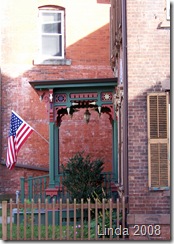 It was through legislation proposed by the G.A.R. that a day of memorial was designated for Union veterans which was originally called "Decoration Day." This day, May 30th, later evolved into our current Memorial Day, a day on which veterans from all wars are remembered and honored. It was also the influence of the Grand Army of the Republic that led to the creation of the Old Soldiers Homes of the late 19th century which later evolved into the current United States Department of Veterans Affairs. Prior to that soldiers of wars were pretty much left to their own devices.

The Grand Army of the Republic reached its largest enrollment in 1890 with 490,000 members and was formally dissolved in 1956 upon the death of its last member, Albert Henry Woolson who died at the age of 109 and was the last surviving Civil War veteran on either side.

The Southern equivalent of the G.A.R., the United Confederate Veterans Association, was formed in New Orleans in 1889 and was active well into the 1940s before its final reunion was held in Norfolk, Virginia in 1951. It was very common for both organizations to work together and between 1881 and 1887, Federal and Confederate veterans held 24 major reunions together. The fiftieth anniversary of the Battle of Gettysburg in 1913 attracted 8,000 Confederate and 44,000 Union veterans and I can only imagine how they all felt meeting on that greatest of battlefields. 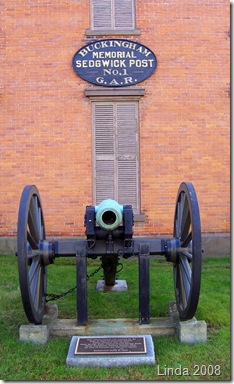 The first post in the Connecticut Department of the G.A.R., of which there was eventually a total of 87, was activated on February 15, 1867 here in Norwich and named for Major General John Sedgwick who was born in the town of Cornwall, Connecticut.

"Uncle John", as he was affectionately referred to by his soldiers, was killed in the Battle of Spotsylvania Court House on May 9th, 1864 as his men, the VI Corps of the Army of the Potomac, were probing skirmish lines ahead of the left flank of the Confederate defenses and he was directing artillery placements. There were Confederate sharpshooters in the area and Sedgwick's men were a bit edgy as they kept ducking for cover. 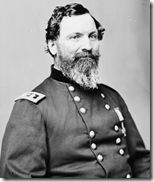 In an effort to rally his men, Major General Sedgwick strode around in the open and was quoted as saying, "What? Men dodging this way for single bullets? What will you do when they open fire along the whole line? I am ashamed of you. They couldn't hit an elephant at this distance." Although his men were ashamed, they continued to flinch away and he repeated, "I'm ashamed of you, dodging that way. They couldn't hit an elephant at this distance." Just seconds later he fell forward with a bullet hole below his left eye. Obviously this went down in the annals of history as irony - very sad irony.

Major General Sedgwick was the highest ranking Union casualty of the Civil War and upon hearing of his death, Lieutenant General Ulysses S. Grant repeatedly asked, "Is he really dead?" as he told his staff that the loss for him was worse than that of an entire division. A solid, dependable, but relatively non-aggressive general, Sedgwick's death was met with universal sorrow as even Confederate General Robert E. Lee expressed sadness over the death of an old friend while Union General George G. Meade wept at the news. 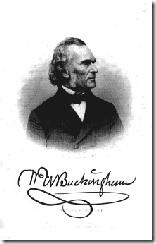 The G.A.R. post in downtown Norwich, which was named in honor of Major General Sedgwick, is the former home of Connecticut's "War Governor" William A. Buckingham who served as the mayor of Norwich from 1849 to 1850 and again from 1856 to 1857. Following his time as Mayor, he was elected governor of Connecticut in 1858 where Buckingham served for seven terms and was invaluable to President Lincoln in raising troops for the war effort.

In 1869 former Governor Buckingham was elected to the Senate where he served as the chairman for several committees including the Committee on Indian Affairs until his death in 1875. The former mayor, governor, and senator 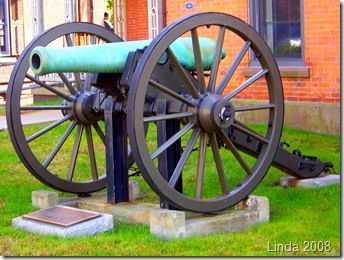 is buried in Yantic Cemetery here in Norwich but unfortunately his gravestone was part of an act of senseless and deplorable vandalism this past May. The vandalism to Governor Buckingham's stone, as well as over 100 others, resulted in almost $100,000 worth of damages in just the Yantic Cemetery alone.

I can't think of too many more heinous acts of vandalism than those done to cemeteries and it makes my blood boil to think that people can be so callous and uncaring as to desecrate the final resting places of other human beings. After the vandalism to the cemeteries, the city installed floodlights so that people can help the police in deterring crimes before they happen and calling in any sort of suspicious activity. Personally I think it's a great idea though it's a little strange seeing a cemetery lit up like a parking lot at night.

I took the above picture recently using strictly the light from the floodlights so as you can see, it's now very well lit and hopefully any further vandals will think twice before they go out and commit senseless, meaningless crimes such as tipping over gravestones.

So - there you have it - a bit of history from Norwich, the city I've called home for the past 8-1/2 years. Sometimes it's easy to forget that there's so much of interest oftentimes right there in our own backyards. I hope that you don't mind that I've shared some of mine with some of you.