Before I start commenting on this week's comments let me just make one quick comment on the weather here in New England ...

Miracle of miracles, I have had the past two Saturdays off of work and what has it done on both of them? Rained! Somehow, it just doesn't seem fair especially when I go back to work for 16 hours on Sundays and it's beautiful outside!! ... Now, on to other people's comments!

On Monday I once again participated in the Manic Monday Meme were the word of the day was Bounty. Even though I could have done a post on the history of paper towels, I chose instead to write about Stephanie Plum, a fictional bounty hunter brought to life by Janet Evanovich in her fantastic books. Perhaps my post may have inspired one of my Manic Monday readers to check the books out ...

Desert Songbird said... I've heard lots of great things about this author. I guess I'm long overdue to check her out. Thanks for the tip!

On Tuesday, in addition to my Veteran's Day tribute post, I took my new Nikon camera out and did some Banking on Downtown Norwich. Translated - I posted some pictures of the Chelsea Savings Bank building! The post even inspired Sanni, who takes some totally amazing pictures, to pop in from Germany and leave a comment ...

Sanni said... YAY!!! Congrats on your new cam - I bet she'll be one of your best friends pretty soon. Frank loves his Nikon - and I love my Canon Rebel... but ssssssh, don't tell :-)
I've been allowed to touch the Nikon a few times and it ROCKS!
I can't wait to see more photos. You know how much I love your pics, don't you???

Aw shucks, thanks Sanni! And thank you to everyone else who left encouraging comments about my photography attempts!

Speaking of photography attempts, that brings us to Wednesday's post which was my entry to Roger's Creative Photography Contest for the week. With Amanda's help, I took one of the pictures that I had taken at the Chelsea Savings Bank and did a little bit of editing with it to come up with this week's photo. The comment that I got from Bulldog (aka one of my favorite EMTs as well as one of my best commenters ever since I started this blog!) made me laugh a bit as I think he has guessed what part of my plan is with some of my photography ...

bulldog said... Y'know, Linda...you keep showing these wonderful pictures of Norwich, and we might actually start seeing the better side of the "Rose City" - as opposed to the "dark" side we see @ work all the time! Great job, and keep up the positive work!

Maybe if I keep showing parts of Norwich in a good light, I can get a part-time job working for the Norwich Tourism Department or something ... if Norwich has one that is!

Thursday's post had a two-fold purpose: I needed a quick and easy post as my work hours were starting to wear at me and it seemed like fun! Caption That Photo! gave you, my readers, the chance to have some fun and make me laugh with some very funny captions! The picture I used was of Andrew and was taken this past May when he worked a dispatch shift with me. Andrew is a paramedic at both American and Backus Hospital as well as a great friend who didn't yell at me too much for using his picture (he did tell me that it was a terrible shot but I don't think so - I think it's all Andrew!). To read all of the funny comments that were left, be sure to go over and check it out but for my personal favorites and the one that Andrew chose as the winner read on ... 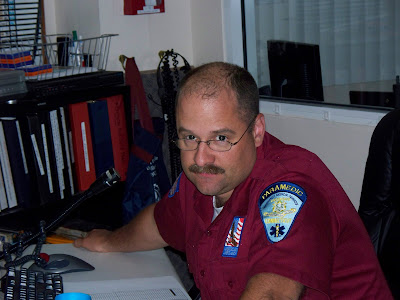 Mary said ... Do I look amused? Now please put your clothes back on ...

Travis said ... "I'm very disappointed. You said there would be CAKE."

And the winner and Andrew's personal favorite is ...

Thank you to everyone for playing along - even Claire came out of hiding for this one! - and a big thank you to Andrew for being such a good sport about it! It's so much fun to read what people came up with for captions - I'm going to have to do caption posts more often!

My post for Friday post revealed Amanda's latest hairstyle (she kept asking me if I was going to do a post about it so I couldn't very well disappoint her, could I?!?) and the kid has once again boldly gone ahead (no pun intended) where I have never gone before or would even consider going! Don't tell her I said this but I give her a lot of credit for being brave enough to be who she is and going against convention on occasion; I doubt she got that bravery from myself or her father so it's got to be all her!

After seeing Amanda's new Mohawk hairstyle in What's a Girl to "Do"? this is what some people had to say ...

Patty said ... A lot of teenagers go through this stage and survive. Believe it or not the parents survive too. I know I did. My daughter had her wild days and grew into a lovely young woman. I think it is normal for your daughter to want to be her own person. The only problem I see with this hair cut is some people may ridicule her for it. Tell her to hold her head up high and be proud that she has a mind of her own and is seeking to be who she is and not who everyone thinks she should be. I think she looks great!

Joan said ... I have to admit that Amanda's "do" is pretty darn cool looking...not too drastic yet very unique and flattering. As an admittedly obsessed "hair" person, I bow to her flair!

Jamie said ... Amanda is an absolute treasure with her adventurous spirit and artistry. Of course you are spoiling half the fun of being a rebellious teenager. How can you rebel when your mother takes a look and says, "That looks nice". :-)

When Amanda first suggested this style of haircut I definitely wasn't saying "that's nice" but afterward, even I had to agree that it looked pretty darned good on her and she's happy with it, which I think is what really matters.

Akelamalu said ... Gobby - that's according to a neighbour!

So ... anyone want to tell me what "Gobby" really means?? The definitions I found when I Googled the word were none too flattering and I would hope that Akelamalu's neighbour wasn't being rude! Any of my British friends care to chime in here? If you've yet to do so - stop by and tell me what one word describes you best!

As suspected, I did manage to hit 100,000 visitors to my blog fairly early this week but alas, it was someone I didn't know who had popped in via a Google Search from New Jersey. I didn't even know who the 5 people were on either side of it so I guess I'm going to have to give some thought to some sort of contest that I can bribe talk people into playing. After all, Ms Maggie Moo is having one heck of a sweet contest over on her blog that people are flocking over to play so even though I have no great talent as a dessert maker (though I do make a pretty good apple crisp and New York style cheesecake) perhaps I can find something to entice people with here? Hmmm ... I shall have to think on that! In the meantime, if you haven't entered, go pop by Mags blog and be sure to tell her that I sent you so that I can get an extra entry or two. After all, I've eaten some of her great desserts so I know what I'd be winning and trust me, it'll be good!

In the meantime, everyone have a great Sunday and be sure to come back and leave me a comment or two this week - it's always great to hear from you!
Posted by Linda at 11/16/2008