Sunday again already and less than a week away from Thanksgiving - hokey smoke, Bullwinkle, where has the time gone?!? Even if I don't have the answer to that one, I do have the answer to where the time is going to be going during this next week as I've got The Work Schedule From Hell coming up. With 32 hours of overtime scheduled over the course of this Sunday to next Sunday, I want to apologize in advance if I don't get the chance to leave too many comments on too many other blogs but I do hope you'll still come by and visit me here and leave the occasional comment. After all, if I don't have any comments then I don't have a Sunday post for next week!

Anyhow, enough making excuses for the upcoming week, let's look back at last week, shall we??

My post for Monday, On Books and Love, was more or less a short review of the Stephenie Meyer novel that has absolutely nothing to do with vampires called The Host. It was a book that I initially had a little trouble getting into but once I did, I thoroughly enjoyed it as it seems that Stephenie Meyer and I have a lot in common when it comes to the concept of love - and heartbreak. Apparently I wasn't the only one who liked The Host as evidenced by this comment from one of my friends in England -

Jean-Luc Picard said ... Linda, I've read this book and thought it was unforgettable. Every time I had to put the book down, I couldn't wait to get back to it. It was one of those rare novels in which the reader cared about the characters. Wanderer, Melanie and those around were great. I really enjoyed the ending. After reading the book, I am now savouring the unabridged audio book version.

Hmmm, audio books ... I don't have much of a commute to work and don't really do any sort of distance driving so it wouldn't do me any good to try to listen to an audio book in that capacity but maybe I should figure out how to blog and listen at the same time - imagine the books I could get through then!

On Monday morning I took the time to step away from the blog and get out of the house for a little while and pay A Visit to Mohegan Park, which then became my post for Tuesday! Mohegan Park is one of Norwich's more or less hidden treasures and a good place for someone with a new camera to visit in an attempt to figure out how to use the thing! It was a cold day but the sky was a beautiful blue and I thought I managed to get a few good shots like this one here which shows Spaulding Pond that is in the center of Mohegan Park. 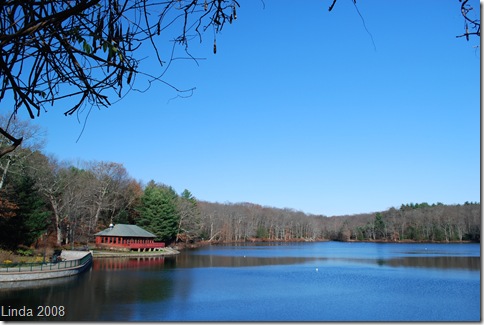 Erik said ... Great pics Linda!! Having been born and raised in Norwich till I was 12, I've seen how much Mohegan Park has changed over the years. Some of the roads have been moved around, facilities were improved, but one thing I miss from when I was a kid, is the zoo!! I have many memories of hearing the coos and caws of the birds, seeing the other animals, including the monkey hut, and the old firetruck that they had at the playground. If I remember correctly, the firetruck was still there a few years ago when I took Hayleigh there.

I'm not sure whether the firetruck is still there or not, Boukie, but I would be willing to bet it is and I'll be sure to check that out next time I head back over there to take more pictures - which would be a lot sooner if it was to warm up a tiny bit!

Wednesday's post was my entry for Roger's Creative Photography Contest, #15-3 and for this week's entry I chose a picture of dark clouds above with a brightly lit Norwich landscape below. The shot was straight out of the camera with no touching up on my part and it was similar to this picture, though not this exact one ... 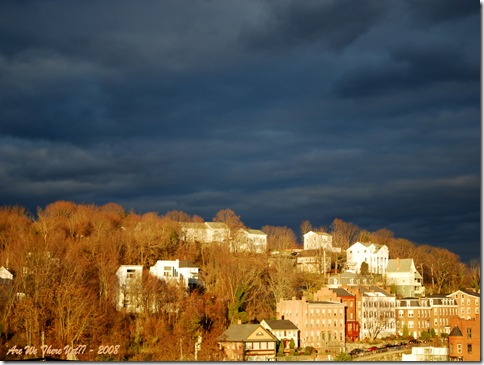 Ralph said ... An Impressionist painter's take on the impending storm over Norwich. The photo as art. I've got to spend some time in the Rose City. You make it look beautiful!

Speaking of Patti, she left a great comment on my second post of Wednesday, A Birth Meme Followed by a Birthday!, where I finally got around to doing a great new meme that Jamie developed as well as wished my favorite CrAzY Working Mom a happy 31st birthday ...

Patti said ... I've always gotten along well with Virgos ~ but Capricorns are supposed to get along with fellow Earth signs Virgo and Taurus. "The earth signs indicate practicality, concern with concrete results, and usually an occupation with detailed financial, business and professional affairs." Well alrighty! Happy Birthday to Tisha ~ she is so young, and I feel so old! I saw this meme, looked up my birth date but didn't do a post. My bad.

Now, Patti, make my friend Jamie happy and do a post and then get Ralph to do one, too. I bet it would be interesting and Ralph does have to do that whole NaBloPoMo thing - what better way to take care of one day's post?!?

With just a week until Thanksgiving, on Thursday I did an I've Got a Question - You've Got an Answer post and asked readers "What are you most thankful for this year?" I received some fantastic answers, a few of which I will share with you here ...

WillThink4Wine said ... I am thankful for God and Country, my entire family, all my friends, my beautiful cats, my home and I am very most recently grateful that my new business seems to have gotten off the ground sooner than I expected ... Translation, before I ran out of money! Now if Obama can just send me some of that affordable health insurance and free money ...

Jeni said ... So many things I am thankful for -family, friends, food, faith -for openers. And all the many things that accompany those "Four F's". Good fortune doesn't always mean high finance, just being fortunate to have enough. Sometimes just enough to scrape by, other times enough to splurge a little here and there, but enough to be able to enjoy still being here, able to share the good and the not-so-hot at times too with so many who mean a heck of a lot to me!

carol g said ... Jamie (Duward Discussion) pointed me in this direction ... I am thankful for that (come to think of it, I am thankful for her friendship and wisdom). I surely have enjoyed this blog as well as Jamie's. It has been a very difficult year. I am grateful that my husband's cancer is currently in remission. We married late in life (just celebrated #4), and still hold hands when we fall asleep at night - I am thankful for that love. I am sure I could think of more, but right now this is what comes to the front of the line.

Carol, that's so sweet and if you had a blog of your own, I'd be happy to come over and read; I'm sure that you and your husband have a wonderful love story of your own to tell. Speaking of love stories ...

On Friday I took the easy way out published A Post from the Past so that I could sneak off to the movies to catch the long-awaited release of Twilight, a love story that I was really looking forward to. I mentioned that it was my duty as a mom to pre-screen the movie to keep Amanda from being disappointed but apparently Claire didn't think that was the case and came out of lurking long enough to say so ...

Now, Claire, how rude! Of course I was performing my parental duties and not just going to drool over the hot teenage vampires who turned out not to be so hot anyway as I wrote about in Saturday's post, "Twilight" Fails to Glimmer for Me.

I think that in the long run, Twilight is going to be a major hit with the fans of the book but alas, perhaps I'm just too old and picky when it comes to translations from the printed page to the big screen. Personally I thought the movie was a bit of a let-down but Cate absolutely loved it and Amanda admitted that "it wasn't as bad as I thought it was going to be" though they both agreed with me that the character of Bella was awful. I guess I was just bummed that the love story that was told so well in the book, wasn't told so well by the actors ... Apparently I'm not the only one who often finds a book-to-movie disappointing ...

Lois Grebowski said ... I'm trying to remember the last time a movie was better than the book ... Can't remember. Hubby can't either ... Sorry you were disappointed.

Queen-Size funny bone said ... Books although they give you the story, you can still interpret them yourself visually in your mind. when you see a movie you can't do that because its THEIR vision not yours. kinda like do you see what i see?

Now that I think about it,though, the A&E version of Pride and Prejudice was actually quite good and did the book credit - especially in the casting of Colin Firth as Mr. Darcy. Rowrrrr ... Oh sorry ... that was me being shallow ... Ahem, anyway, I would have to say that sometimes the movie is a little bit better than the book - just not too often and just definitely not in the case of Twilight. Which is too bad, because I really, really wanted it to be really, really good. And it wasn't ...

Oh, and one thing I hadn't thought of was brought up by Last Minute Lynn who very practically stated ...

Last Minute Lyn said ... As much as movies cost these days it really sucks when you think it was a waste of money. It's especially painful when it doesn't live up to the book.

True, Lyn, true - it most definitely sucks when it takes a bite out of your wallet and the vampires weren't what you hoped they'd be! Oh well, I'm hoping for a better production in the sequel which Summit Entertainment is already planning on. One can dream, right?!?

So, that's it for this week's Comments on Comments ... please stop in again sometime during the next week and drop me a comment or two then be sure to come back next Sunday to see if you've made the weekly wrap-up. Everyone have a fantastic Sunday!