My Bathtub Has Feet!

Right around Christmas a couple of years ago, I invited my favorite paramedic/dispatcher and his family over for dinner. Andrew had done a few things around the house for me that I wasn't able to do with my tricky back that has a tendency to go out at the worst possible time and I wanted to be able to express my thanks to not just Andrew and his strong back but also to Bethany, his fantastic wife who was kind enough to let me "borrow" her husband on several occasions. To that end, I invited over Andrew and Bethany and their two great kids - AJ and Lea.

We enjoyed a very nice dinner and then retired to the living room for the kids to watch a little TV while we adults visited. At the time, I believe that Lea was four years old or so and cute as a button. At one point, she told her parents that she needed to use the bathroom so Andrew accompanied her upstairs and when they came back downstairs Andrew was laughing as he told me that Lea was totally fascinated by my bathroom because "Miss Linda's bathtub has feet!" 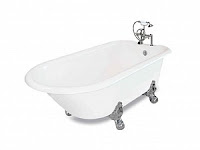 Lea is quite right in that the bathtub that I have here in the house that I rent is one of those great old clawfoot bathtubs that Victorian houses sported back in the day. It's very deep and very high and most definitely has feet - rather big feet actually!

It's the type of bathtub that you could sink down into and have a good soak in except for the fact that it's so deep that I can't get a full tub of hot water due to a deficient hot water heater! Which is too bad as it would be great to be able to light a few candles, throw in some scented oil, and just lean back and relax after a stressful day at work. Perhaps it's not as great as some of the whirlpool tubs I've seen out there but it's a close second and definitely one of the best features of this house I've lived in for 8-1/2 years now. 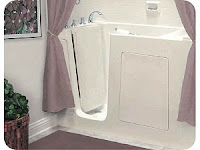 The only other problem with this bathtub is that occasional bad back that I mentioned above. As great as a long, hot soak in this tub would be when my back hurts, there's that whole problem of getting in and out of it when I can barely walk to begin with! I think in cases like that, I would be much better off with one of those cool walk-in bathtubs that I've seen commercials for.

I'm sure that I'm not the only one who wouldn't mind having one of these great tubs in their home - I can readily think of several other people like my former grandmother-in-law out in California who, bless her 85-year old heart, has some trouble getting around these days due to painful arthritis and even one of my brothers who has his own share of back troubles that are even worse than mine.

I tell ya, if I ever win that elusive lottery that we've got a pool for at work and can finally build a house of my own then I'm going to have all three kinds of the bathtubs I've mentioned above - claw-foot, whirlpool, and walk-in. That way, I'll be prepared for all occasions!

Email ThisBlogThis!Share to TwitterShare to FacebookShare to Pinterest
Labels: back pain, bathtubs