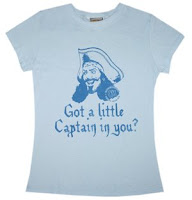 To say that it's been a long time since I've been in college and even thought about wearing clothing like the t-shirt pictured to the left (though Captain Morgan is quite the popular guy these days!) would be a major understatement. It's been an extremely long time since I attended college and an even longer time since I've done what one might call any sort of serious drinking. Truth be told, I'm not a drinker as Claire could attest after spending my 50th birthday with me at the local pub where I barely managed to make it through two pints of ale by the end of the night!

However, there's a reason why I don't really imbibe and that's because of the one night in my life back when I was attending college when I broke out of my "I don't really drink" persona and ended up with the worst hangover that I think anyone anywhere has ever had. In the end, it was not fun at all and it definitely taught me that alcohol is definitely something that's better enjoyed in moderation.

The night I ended up on the bathroom floor at my friend Judy's apartment came about as the result of a silly bet with one of the guys that I worked with at my college radio station in Stockton, California. Fonzi (yep, his real name) had not quite finished descending from the Neanderthals and was of the opinion that men could do everything better than women - especially drinking. I took a bit of an exception to that pronouncement and (stupidly) told him that I could most likely match him drink for drink, I just chose not to drink most of the time. It was at that point that he laid down a bet and I (stupidly) took it up.

On a Saturday evening in August of 1984, we met over the kitchen table at Judy's apartment with nothing between us except a bottle of J&J Whiskey, two shot glasses, and glasses of water for a chaser. The object of the bet was to go shot for shot to see who could do more of them before he or she got totally drunk and stupid. The bet started out okay; however, by the time we got to shot #9 (or was it #10?) I could barely choke the stuff down without wanting to gag! I was completely in charge of all of my faculties but the taste was absolutely horrible and there was no way I was going to be able swallow another mouthful without spewing it all over the table!

Fonzi, of course, claimed triumph but, at that point, I just didn't care as I thought it was more lady-like to lose the bet than mess up Judy's kitchen with what was sure to be a royal mess were I to try to swallow one more mouthful of the foul-tasting whiskey. At that point I stood up from the table to move to the living room and immediately dropped to my knees as all of the alcohol rushed directly to my head. Apparently I was fine while sitting but standing up was not a good idea at all ... something I realized way too late!

Luckily Judy's downstairs bathroom was only about six feet away so I crawled on my hands and knees onto the cool tile floor and spent the night curled up next to the toilet being sicker than I ever was in my entire life. When I managed to emerge the next morning I could barely pick my head up and spent most of the day lying on the living room floor wishing for a swift and immediate death every time I looked up and saw the Jack Daniels t-shirts that Fonzi and my friend Scott were wearing.

Twenty-four years later I can still remember how awful I felt and have managed to keep the promise I made to God and myself that I would never get drunk again if He'd just let me survive my own stupidity! Every great once in awhile I'll have a drink or two but even though beer is apparently proving itself to be recession proof with continued increasing sales, it's not from any effort on my part as I don't really don't drink the stuff 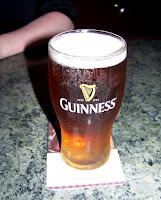 ... or vodka ... or rum ... or especially whiskey ... or anything else that's going to remind me of the night I spent on Judy's bathroom floor! Better to leave the drinking for those who can handle it as I sure know my limitations!

So ... perhaps this will better explain to Claire why I had two pints of ale to her six on my birthday though I rather doubt she'll quite grasp the whole concept of not drinking as she seems to have it down to a science. Must be the British blood in her veins - either that or she never made a really stupid bet!
Posted by Linda at 11/01/2008