On Books and Love 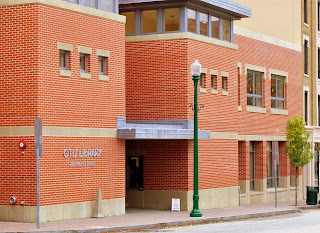 Growing up, I spent a lot of time in the library and have always enjoyed reading. I remember reading The Wizard of Oz way back when I was in second grade and it seems that it was then that I developed my love for good stories. I love a book whose pages you can lose yourself in, whose characters become real, whose final page you're sorry to turn, whose story you remember long after the book has been finished.

I had gotten away from doing a lot of reading over the past few years but I've been making more trips to the library lately and currently have five books lined up and ready to be read; books that have either been recommended to me or that I stumbled across on the Internet which sounded good. It's a joy to be reading again even though my eyesight isn't what it used to be and I either need the large print edition or a pair of reading glasses stuck on my nose in order to see the words before me. Come to think of it, I'm starting to need the same thing for the computer! 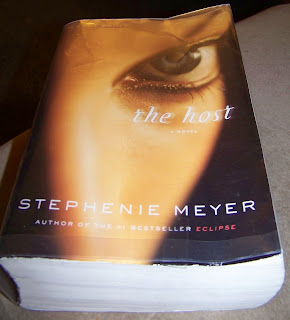 I recently finished reading The Host by Stephenie Meyer, a book that I wasn't entirely sure I was going to finish when I first picked it up. Stefanie is more famous for her four-book Twilight Series, books that I've written about myself on this blog and whose first book, Twilight, comes out in movie form at the end of this week. Twilight is the love story between a teenage vampire and a teenage mortal and it appealed to the hopeless romantic in me. Who knew that The Host would do the same thing?

The Host is a science fiction/romance novel and tells the story of an alien species called 'souls' who take over Earth because they believe humans are too violent to each other. Wanderer is one of those souls and this is her story as she finds Melanie, whose body she occupies, resistant to being taken over by an alien.

I had been warned by Darci, Amanda, and Cate that the book wasn't very good and that I probably wouldn't like it and, for the first ten chapters, I was afraid they were going to be right. It was pretty slow-going but somewhere along the way, the story finally took hold and I found myself wanting to know what was going to happen next and how things were going to resolve. I found myself immersed in the story of Wanderer, Melanie, Jared, Ian, and Jamie and I even found myself crying a time or two - a sure sign that I have been sucked into a story.

There was something about Stephenie Meyer's writing in New Moon, the second book of the Twilight Series, that really spoke to me, as if this woman and I shared a lot of the same thoughts on love and heartbreak and how it can completely and totally debilitate your entire life if you aren't careful and when I came across the following passage in The Host, I again marveled at Ms. Meyer's insight ...

"I knew the human exaggeration for sorrow - a broken heart. Melanie remembered speaking the phrase herself. But I'd always thought of it as a hyperbole, a traditional description for something that had no real physiological link, like a green thumb. So I wasn't expecting the pain in my chest. The nausea, yes, the swelling in my throat, yes, and yes, the tears burning in my eyes. But what was the ripping sensation just under my rib cage? It made no logical sense. And it wasn't just ripping but twisting and pulling in different directions."

Being a bit of a skeptic growing up, I had always scoffed at the idea of a "broken heart" myself because it just didn't seem to make much sense that you would feel the pain of an emotion anywhere near an organ that was designed to pump blood through your system. Sure, you might feel a broken heart in your head, which is where all thoughts and emotions originate but certainly not anywhere near your chest, right?

Then my own heart was broken and holy smokes, did I find out that I was wrong. I can still remember clutching at my chest in the spot where I knew without a doubt my heart was as I could feel the actual cracking and breaking as small pieces of it came loose and floated off, never to be found again. It was as much of a physical pain as any other I have ever had and I was totally shocked as, like Wanderer, I never expected it. It made no logical sense and yet there it was.

I've had my heart broken more than once over the course of my life - three times by the same guy who to this day would be capable of breaking it for a fourth time should he ever choose to do so - and I learned very well that a broken heart is not at all an extravagant exaggeration but a very real truth that can knock you to your knees and change the whole course of your life. Apparently Stephenie Meyer knows this, too, as she's written about my heart in not just one now, but several of her books.

Even though I had gotten up at 4:45 on Friday morning to be into work early, I stayed up after getting home from work at 11:00 p.m. that night and read until almost 3:30 in the morning so that I could finish The Host; so that it would end the way I hoped it would; so that I could once again have my faith in true love restored.

I wonder what Stephenie Meyer is going to write for me next?
Posted by Linda at 11/17/2008

Email ThisBlogThis!Share to TwitterShare to FacebookShare to Pinterest
Labels: books, The Host