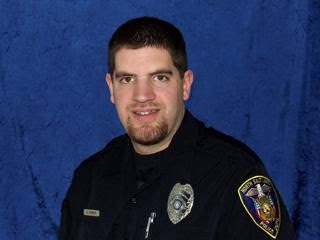 Police Officer Charles Skinner of the North Salt Lake Police Department, Utah died on Friday, November 7th, as a result of injuries received in a crash earlier in the week. Officer Skinner, 30, suffered head injuries after his police cruiser skidded on a rain-slick road and slammed into a sign post while pursuing an alleged car thief at approximately 4:00 a.m. on Monday, November 3rd.

Officer Skinner was transported to the hospital in critical condition with massive head injuries. Doctors performed several surgeries but the 5-month member of North Salt Lake Police Department never regained consciousness and his family decided to take him off of life support on Friday night.

A former member of the Salt Lake City Police Department, Officer Skinner and his wife Kaitlyn had bought a house and welcomed two children into their lives - twins, a boy and a girl, who were born just four weeks ago.

Officer Skinner's father-in-law, Sgt. Gary Koehn of the Bountiful Police Department, said "Our family will grieve this loss for years to come, but we will continue to honor his memory for his children, and they will always know their dad was a great man, a respected police officer, and a hero."

"We are so fortunate to have been blessed to have Charlie in our lives," Koehn said. "He told my daughter just a week ago that he felt like he had the perfect life. They had just purchased a home, just had the two twins, and he was doing what he loved." 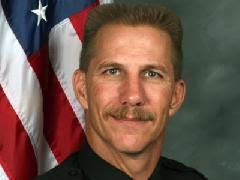 In California, Deputy Sheriff Lawrence Canfield, a 43-year-old Sacramento County sheriff's deputy, succumbed to injuries sustained in a traffic accident on Wednesday, November 12th, in the town of Rancho Cordova .

The collision occurred around 2:00 p.m. as he was traveling with lights and sirens activated attempting to overtake a speeder when a vehicle turned in front of him. The accident took place just 50 feet away from the site of a similar wreck that happened three years ago involving a Sacramento County officer who spent two months in the hospital recovering from injuries. Witnesses called 911 to report that an officer hat been hit and several motorists stopped to aid the fallen officer until emergency officials arrived. Deputy Canfield was transported to San Juan Medical Center in Carmichael where he was pronounced dead approximately two hours after the crash.

Deputy Canfield, who had been assigned to the Rancho Cordova Police Department's motorcycle unit for four years, was a 13-year veteran of the Sacramento County Sheriff's Department. Sheriff John McGinness, a personal friend of the deputy's father who is a retired sheriff's sergeant, called the accident "a horrible, horrible tragic loss" that "goes like waves through the department and I'll tell you, through the whole law enforcement community."

Sheriff McGinness described Deputy Canfield, who had also served in the U.S. Army, as "a very, very outgoing, personable, happy sort of guy. He absolutely loved what he did," McGinness said. "We know this job is not without its risks."

"Our thoughts and prayers go out to our officers and their families," said Chief Reuben Meeks of the Rancho Cordova Police Department.

Deputy Canfield is survived by his wife and two children both under the age of ten as well as his parents, and extended family
Posted by Linda at 11/13/2008